A conversation with Andrew Glantz, co-founder of GiftAMeal 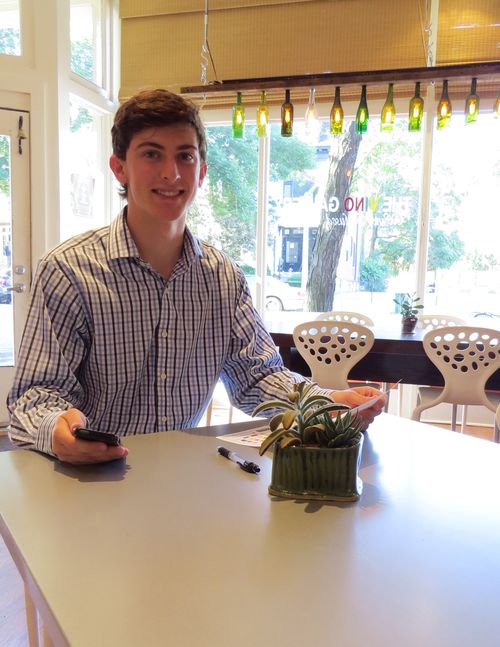 At the suggestion of CWEnder David Strom I met with Andrew Glantz, above, a W.U. junior majoring in Finance and Entrepreneurship, to learn about his new phone app, GiftAMeal. (Strom is one of Glantz’s mentors at W.U.’s Olin School of Business.) Before we got down to the business of the business, I wanted to learn more about this young L. A. native.

I’m not telling you something you don’t already know when I mention that his is a different generation. After freshman year in college, Glantz interned at a venture capital firm. There he met his future business partner, Aidan Folbe, who’s two years younger than Glantz and a freshman at Dartmouth. Folbe is COO of GiftAMeal, Glantz is CEO, and St. Louisan and fellow W. U. student Jacob Mohrmann is Chief Marketing Officer.

Think of GiftAMeal, a phone app that launched September 25, as “yelp (the restaurant recommendation website) with a conscience” or, how to eat your cake and share it too. What these young entrepreneurs observed is that most people choose a restaurant based on the recommendations of friends, rather than reviews from people they don’t know, and they found a way to capitalize on that observation.

The video explains how it works. In a nutshell: While dining at one of 49 participating restaurants (see list here – currently 7 are located in the CWE), you can recommend it to your friends using the GiftAMeal app. When you do, a meal will be donated through Operation Food Search, the largest distributor of food to the needy in the St. Louis area. Users can also add a personalized message and/or a photo of their meal through the app or via Facebook and an additional meal will be donated. In the short time since the launch, 651 meals have been donated to the needy.

Glantz said that GiftAMeal is both a social and for-profit venture. For the first six months or so participating restaurants, which will be identified by the GiftAMeal stamp of approval, are not paying to participate. In the future, there will be a fee for being included on the app. The creators decided to include local businesses only, and not chain restaurants.

As we concluded our conversation I asked Glantz what his dream is for the future of GiftAMeal. He said that the app should be operating in Chicago within the year, and then hopefully in L.A., D. C., and New York. One day he hopes GiftAMeal will be operational nationwide.

When I asked where he thought he would live after graduation, Glantz didn’t hesitate to say he would remain in St. Louis, “much to my mother’s dismay.” “In L.A.,” Glantz continued, “I couldn’t have been introduced to all the people I have met in St. Louis, the entrepreneurial resources have been terrific.”

For every person who downloads the app during the month of October, GiftAMeal will donate a meal. For questions or to learn more, contact andrewglantz@wustl.edu.

A visit to City Greens Market in The Grove