Michael Drummond’s “Being Played” at World Chess Hall of Fame 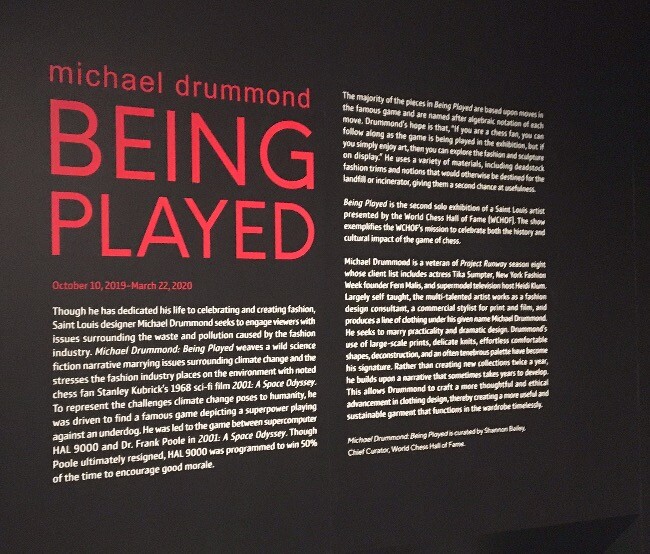 Last evening at the opening of Being Played at World Chess Hall of Fame, designer Michael Drummond, below, commented that his year-long effort to create a narrative about the effects of the fast fashion industry on the environment “almost killed him.” 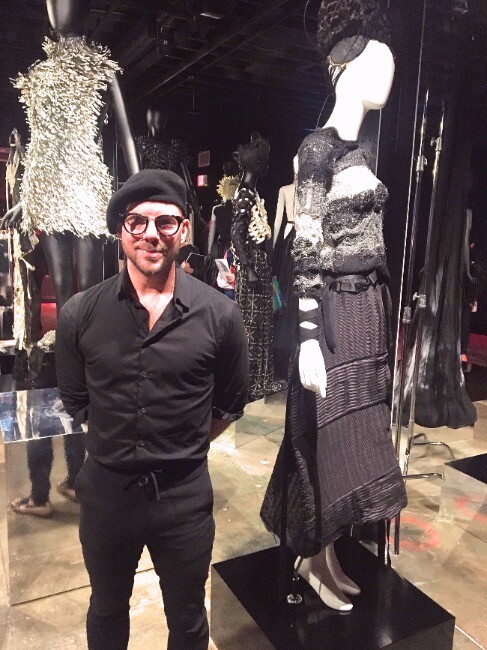 In this exhibition Drummond, a veteran of Project Runway Season 8, has connected the issues surrounding climate change with the stresses the fashion industry places on the environment, and arranged them as a chess game. To illustrate the challenges climate change poses, Drummond looked for a famous chess game as inspiration. He found it in Stanley Kubrick’s 1968 sci-fi film 2001: A Space Odyssey when Dr. Frank Poole plays against the supercomputer Hal 9000. 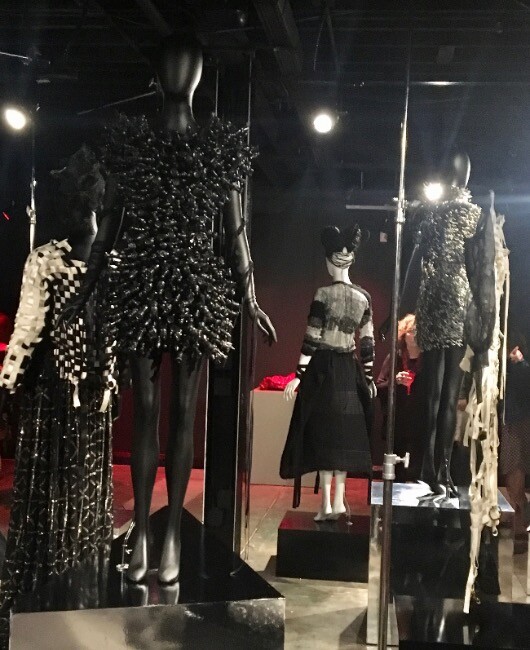 I have to admit that I was so engrossed in how beautiful Drummond’s creations are that I was not thinking about a chess game at all.

In the handsome exhibition catalog published by WCHOF, Drummond says that “It’s a tricky predicament to simultaneously give yourself over to the glamor and fantasy of fashion and yet be repelled by the industry’s excess and its hold on the public psyche.” 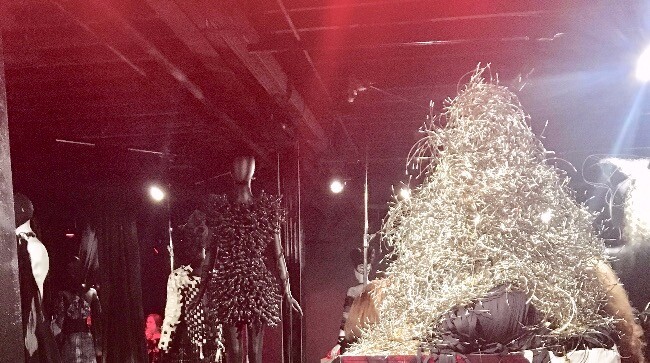 Drummond used a “variety of fabrics in his creations both natural and man-made including laser-cut synthetics, clothing spun from steel, hand-crafted shoes (see Drummond’s own which I assume are handmade, below), and digitally-printed accessories.” 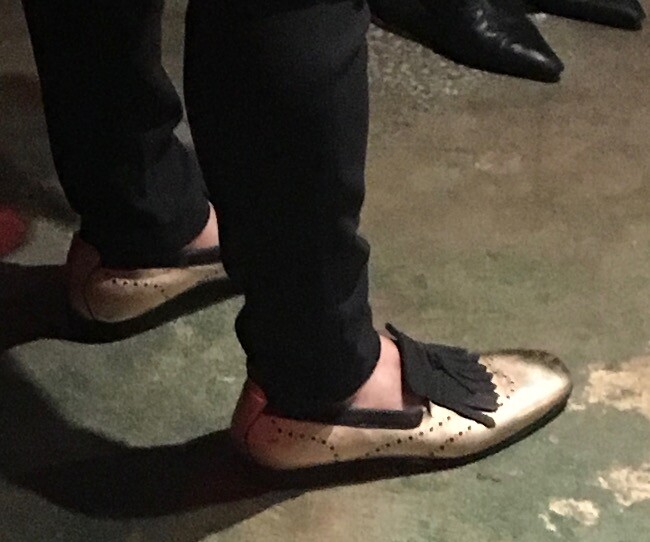 Being Played remains on view at World Chess Hall of Fame until March 22, 2020. I suspect you’ll want to return often (as I do) to study Drummond’s craft, it’s quite amazing. Perhaps on one of my visits I’ll figure out the game Being Played as well. 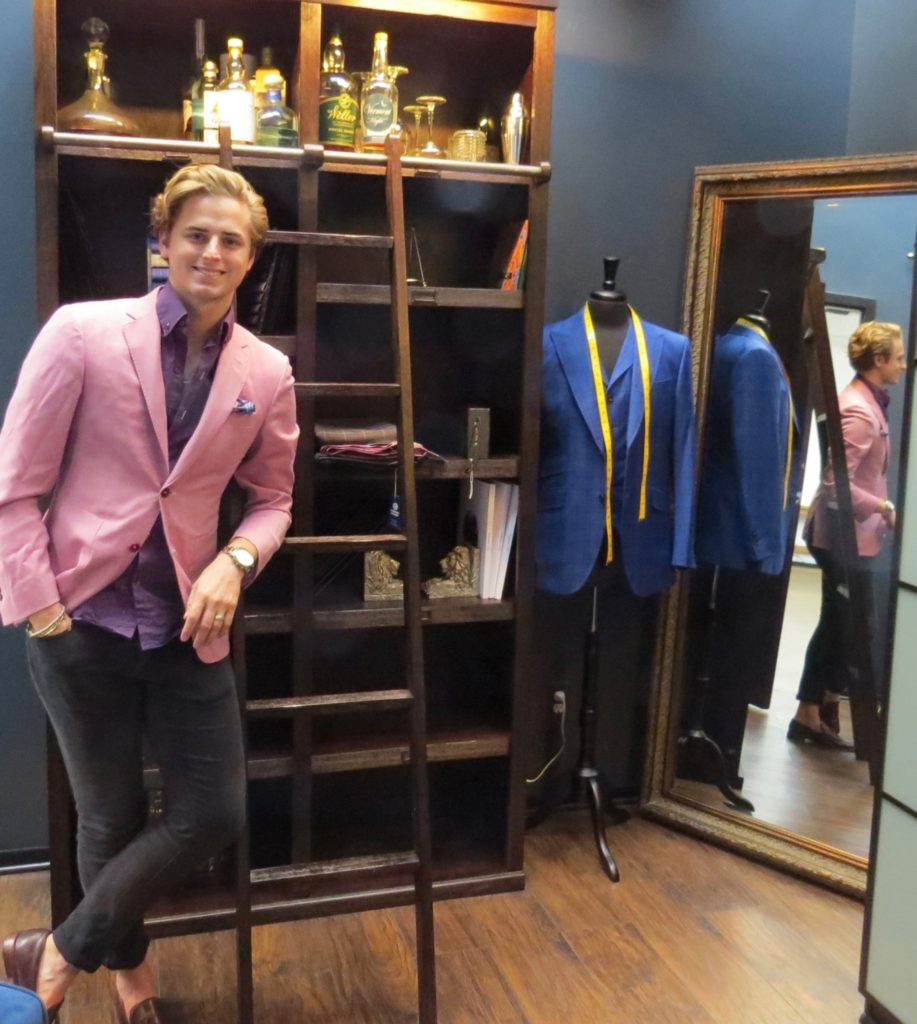 In an age-old story, it was love that drew 24-year-old Dakota Grady to St. Louis from his hometown of San Antonio. Three years ago he and St. Louisan Myra Stull, a Montessori teacher and writer, were married.

A reference to religion in a post about men’s fashion would seem rather unusual, except that Grady, a Reformed Baptist, wears his faith on his sleeve. The 2nd oldest of 7 children (his 4 brothers have Biblical surnames), the young entrepreneur said that fashion is “his calling” and that he has always had his own style and a knack for putting clothes together.

Upon arriving in St. Louis he talked his way into a job at Savile Row, a custom clothier in Clayton, despite that at the time they said they weren’t hiring. Initially he worked only 5 hours a week, but his work ethic paid off as he learned the made-to-measure menswear business and he was eventually hired full time. 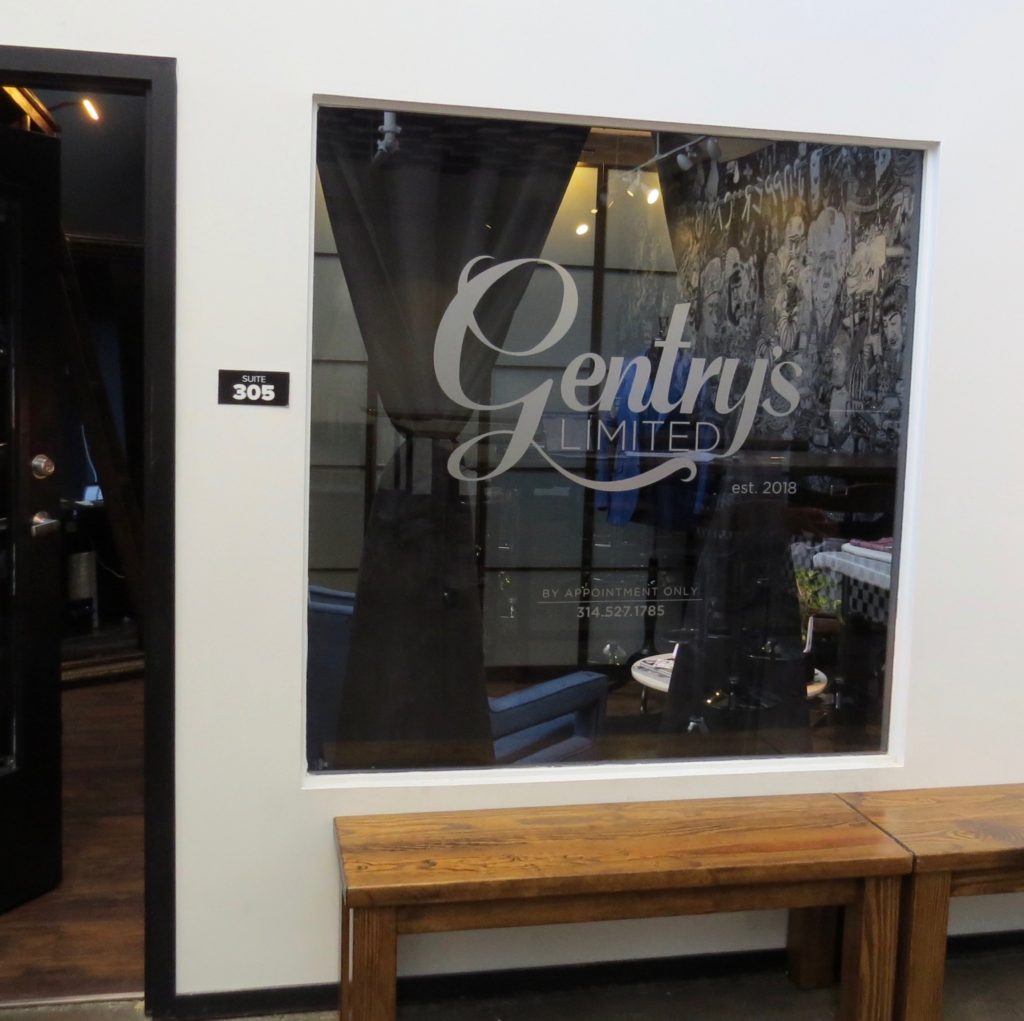 When Grady decided to strike out on his own and offer his unique brand of service to St. Louis, he chose to locate his shop, Gentry’s Limited, in the Central West End.  He said that there were already several men’s clothing stores in Clayton. When I interjected that there are several men’s stores in the CWE as well, he countered that the neighborhood’s history attracted him, as did its edginess, and the vibe at TechArtista appealed to him and to his customers who enjoy the novelty of the location..

Grady describes his customers as busy professionals of all ages who feel presentation is extremely important, some of whom don’t have the time or even necessarily like to shop. 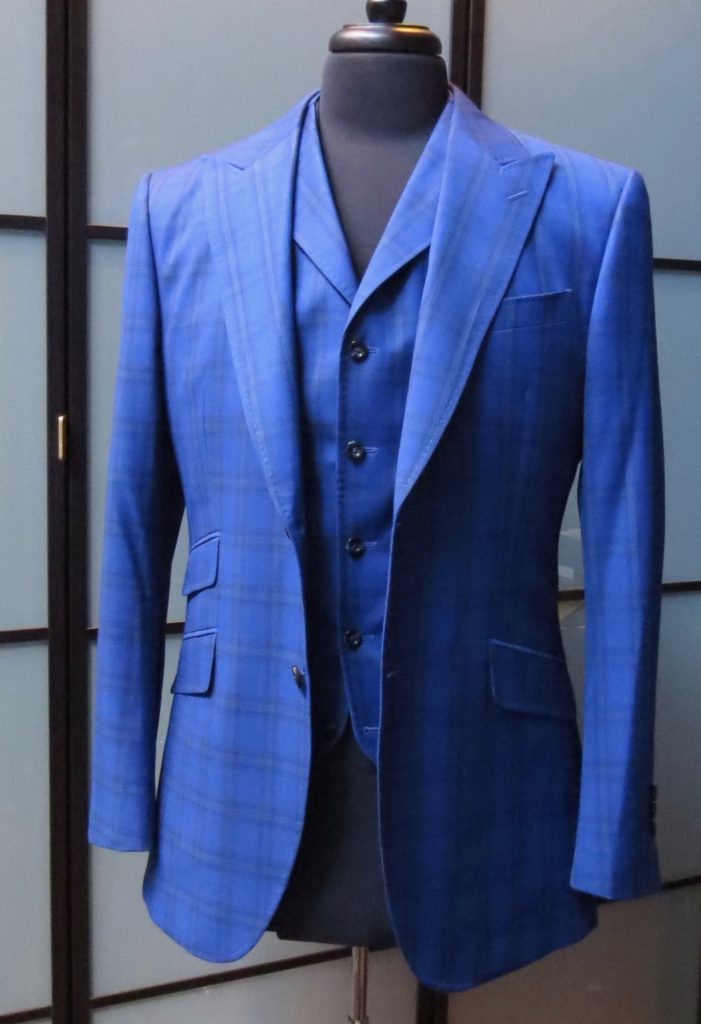 The striking suit above is an example of what Gentry’s Limited offers. Consultations can take as little as 30 minutes or more than an hour. Grady helps clients with design, fabric selection (he has an exclusive selection of fabrics to choose from), and takes measurements which are kept on file. 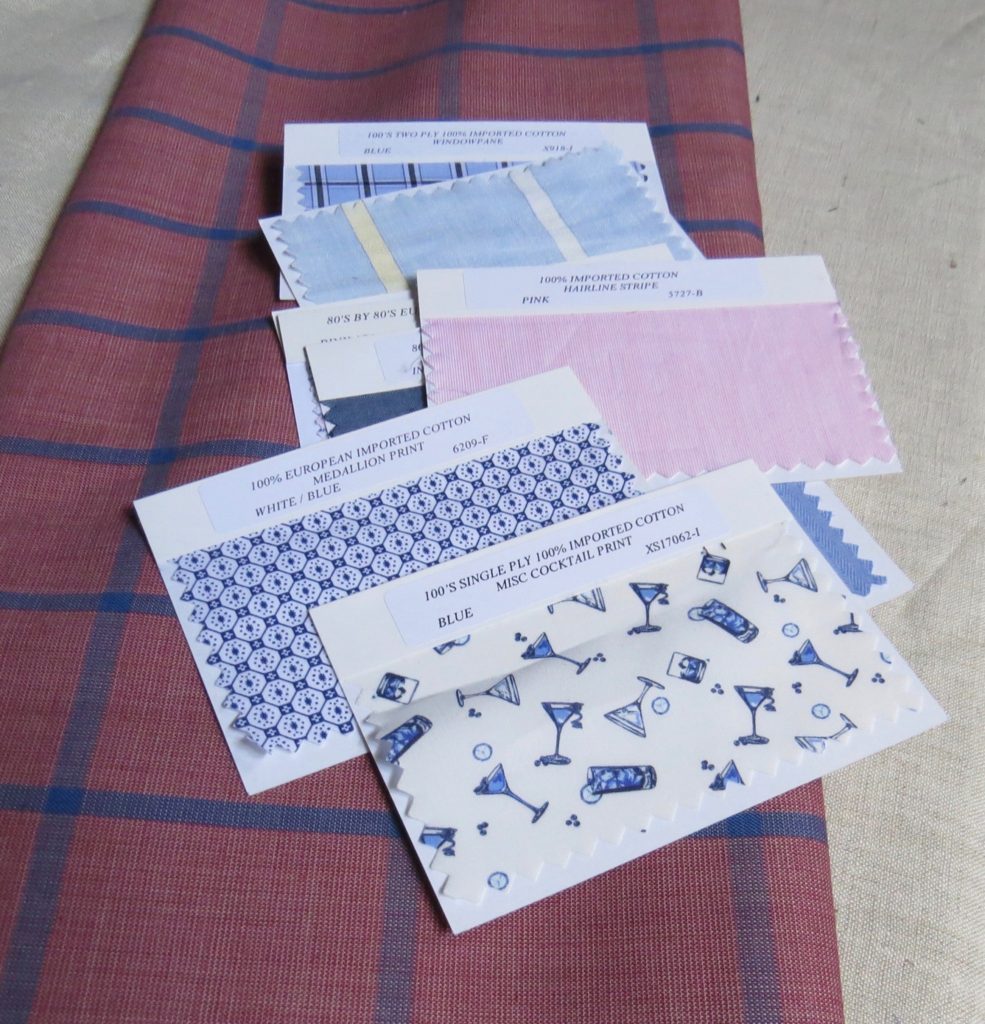 Examples of handsome fabric and imaginative lining selections are shown above. Fabric choices include wools, linens, cottons, bamboo, cashmere and a few synthetics. 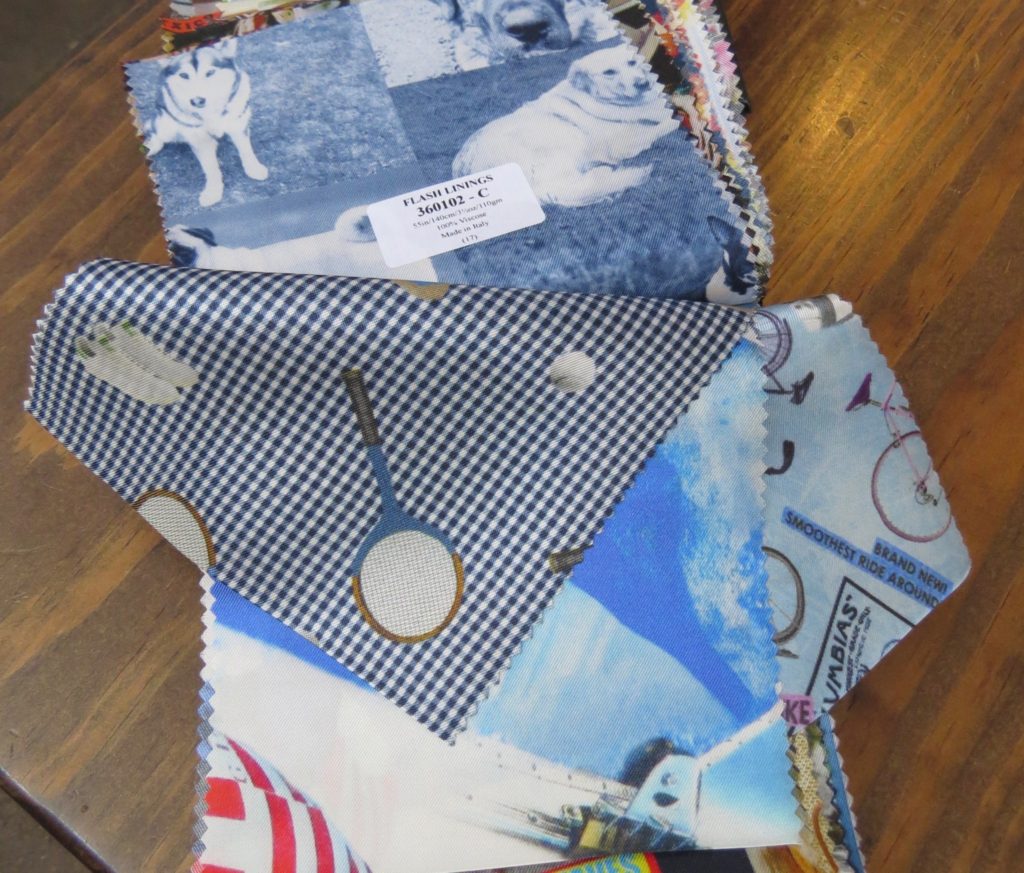 The photo above shows one of many books filled with off-beat fabrics to choose from for custom-made shirts, which start at $140 and take 3 to 4 weeks to complete.

As we wrapped up our interview Grady said the adage “less is more” can be applied to his made-to-measure clothing. Having one beautiful hand-made suit that fits perfectly is worth more than owning several less expensive suits of lesser quality.  He’s pleased that his clients have responded so favorably to his product and the service he offers, though he has never doubted his decision to venture out on his own.

Gentry’s Limited, 4818 Washington Blvd., Suite 305, is open by appointment only. For more information contact Dakota Grady at 314.239.7982 or dakota@gentryslimited.com. 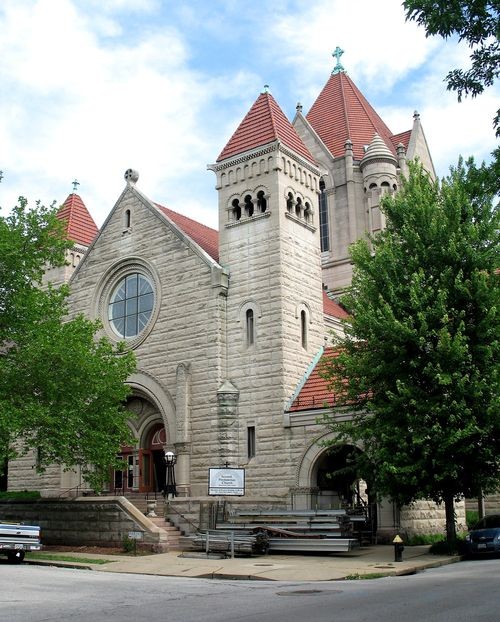 One of the many interesting and not generally known facts about the CWE’s Second Presbyterian Church, 4501 Westminster at Taylor, is that it features a collection of beautiful Tiffany glass windows in the sanctuary (see mention in post here). Additionally, the interior of the Romanesque Revival structure has undergone major renovations over the past 5 years, including removal of the organ’s 50-year-old pipes which were transported to Ohio for cleaning and reinstalled a few months later. See earlier post on that topic here.

Recently, I was invited by long-time friend Nancy Quigley, who is active at Second Presbyterian, to photograph stunning new banners and paraments (defined as “ornamental ecclesiastical hanging or vestment”) that were created by internationally-known fiber artist Marianne Axboe and dedicated April 23. 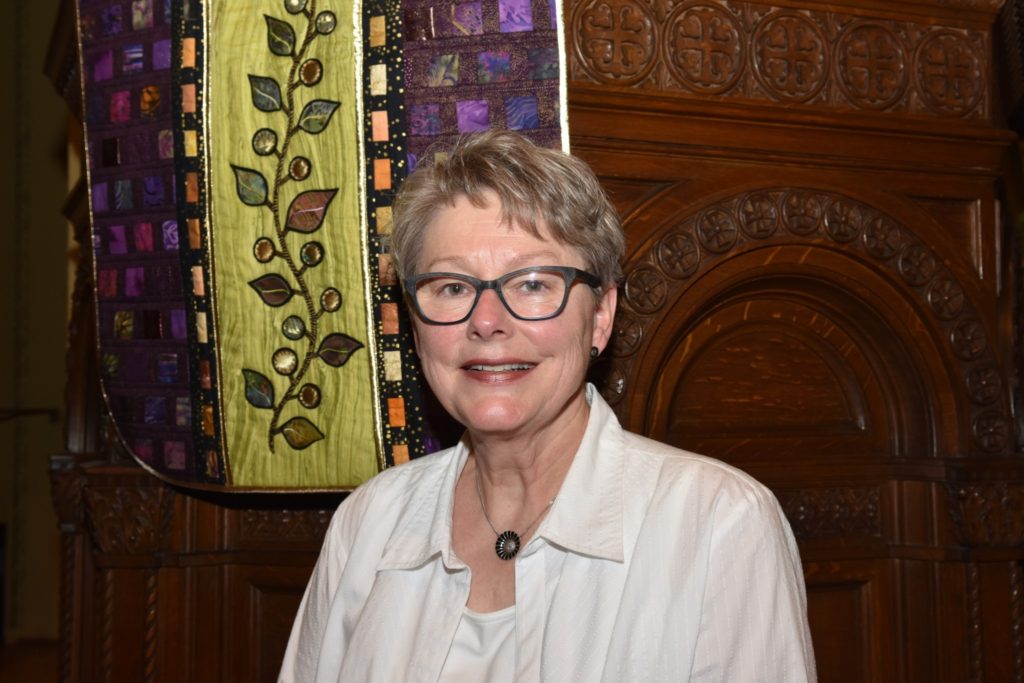 Axboe, photographed in front of one of her pieces, had promised her friends, former CWEnders Bente & Neil Seitz, that she would create the new banners for their church after the renovation of the sanctuary was completed. Her efforts were made possible by the 2PC Memorial Fund.

Axboe and her husband Carl Nielsen, formerly an anesthesiologist at Barnes Hospital, have since left their home in St. Louis and retired to their native Denmark. 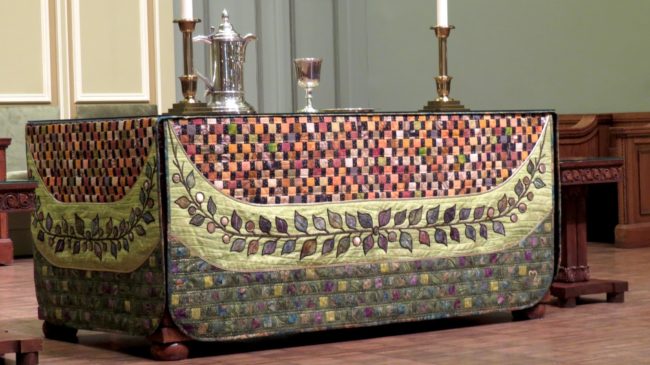 In the artist’s statement regarding her work Axboe remarked that she hadn’t counted on the particular colors of green that were chosen for the walls of the sanctuary, above, saying she found it “on a very difficult place on the green color spectrum.”  She decided to “tone down” the selection of the bright green values that she usually works with, and “go with the more muted greens and let them play against rich golden colors…”

She continued: “The cross hanging over the altar table inspired me to use a mosaic technique, and by using small shiny gold pieces of fabric I could add life and movement to the darker colors.” Axboe also re-purposed fabrics that came from older paraments that belonged to the church. 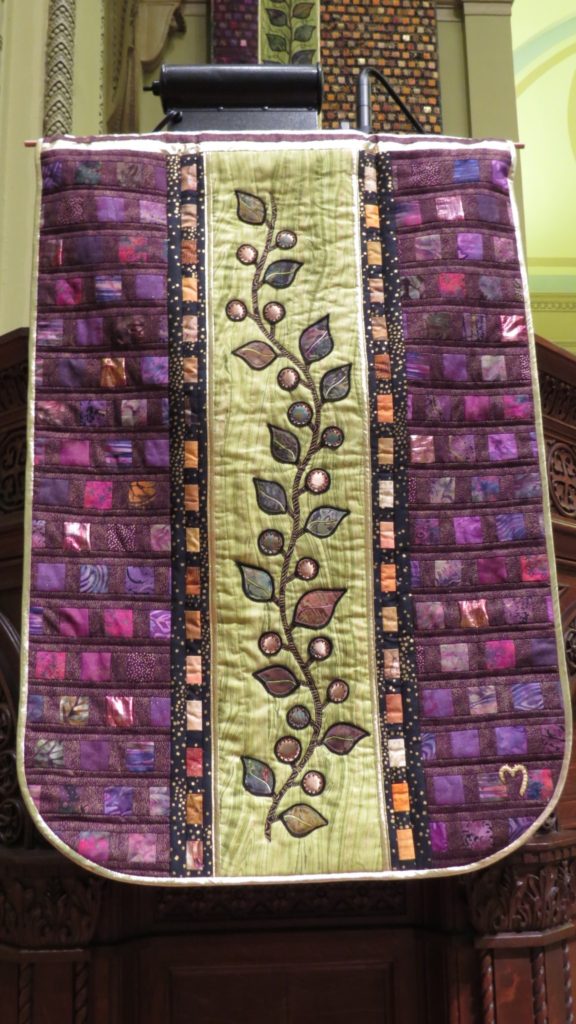 Axboe explained that “the branches with leaves symbolize the daily growing and nurturing of our spirit.” Her signature “m” can be found in the lower right corner of the piece above and in the close-up below. 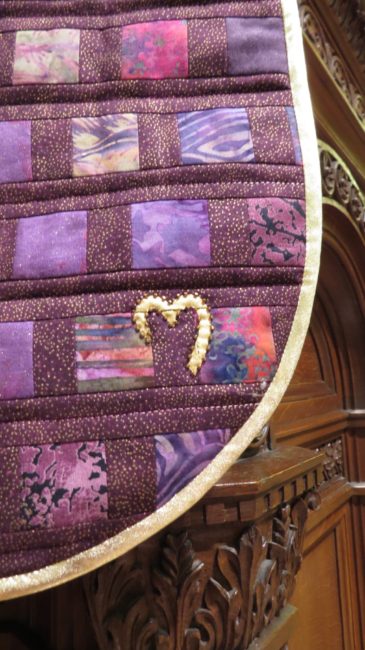 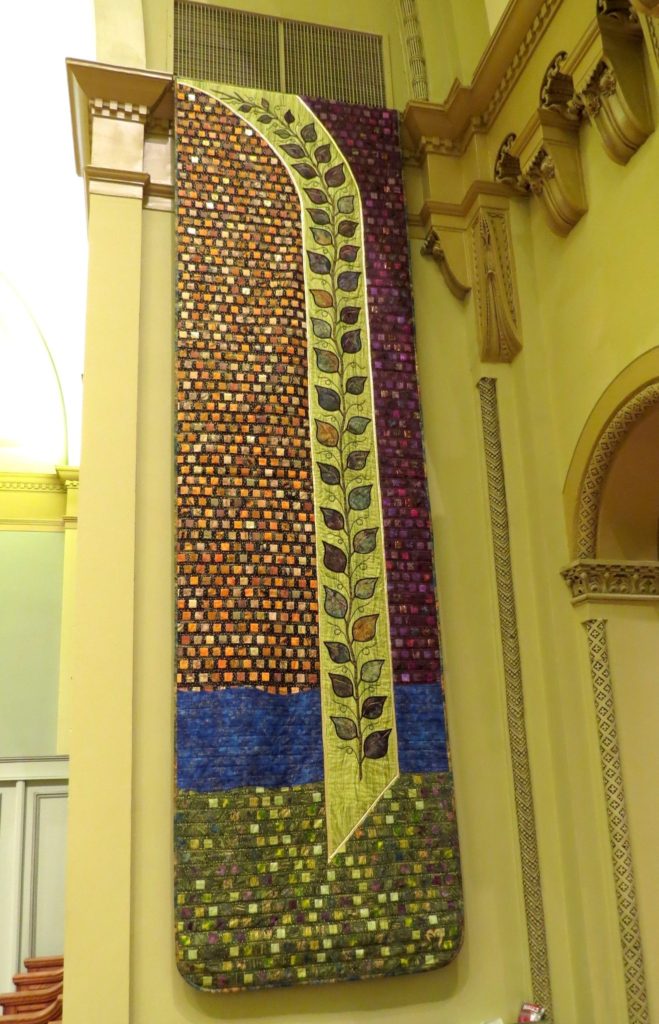 The two banners that form an arch around the sanctuary depict a river running from one to the other, symbolizing baptism (see 2nd photo at top for a better perspective).