2020 was set to be a banner year for Shakespeare Festival St. Louis. To celebrate its 20th anniversary, a name change —St. Louis Shakespeare Festival— was announced early in the year, and planning for this season’s production of Much Ado About Nothing was in full gear. Then COVID 19 appeared on the world stage, and “Much Ado…” became “what to do…”

Producing Artistic Director Tom Ridgely and his staff may have taken a cue from the Bard himself while they struggled to cobble some sort of production together. It was interesting to learn recently that the actor and playwright William Shakespeare learned to work around frequent plagues throughout his lifetime. (You can read more about this in an article in STL Magazine authored by Shakespeare Festival’s Tom Ridgely or Stephen Greenblatt’s piece in The New Yorker: What Shakespeare Actually Wrote About the Plague.)

After 20 years of staging free Shakespeare performances in Forest Park, which drew an average of 2000 per night (some performances saw crowds of 3 to 5,000 people), Shakespeare Festival’s Development Associate Tori Rezek came up with an inventive performance, a walk through the Forest Park titled A Late Summer Night’s Stroll. 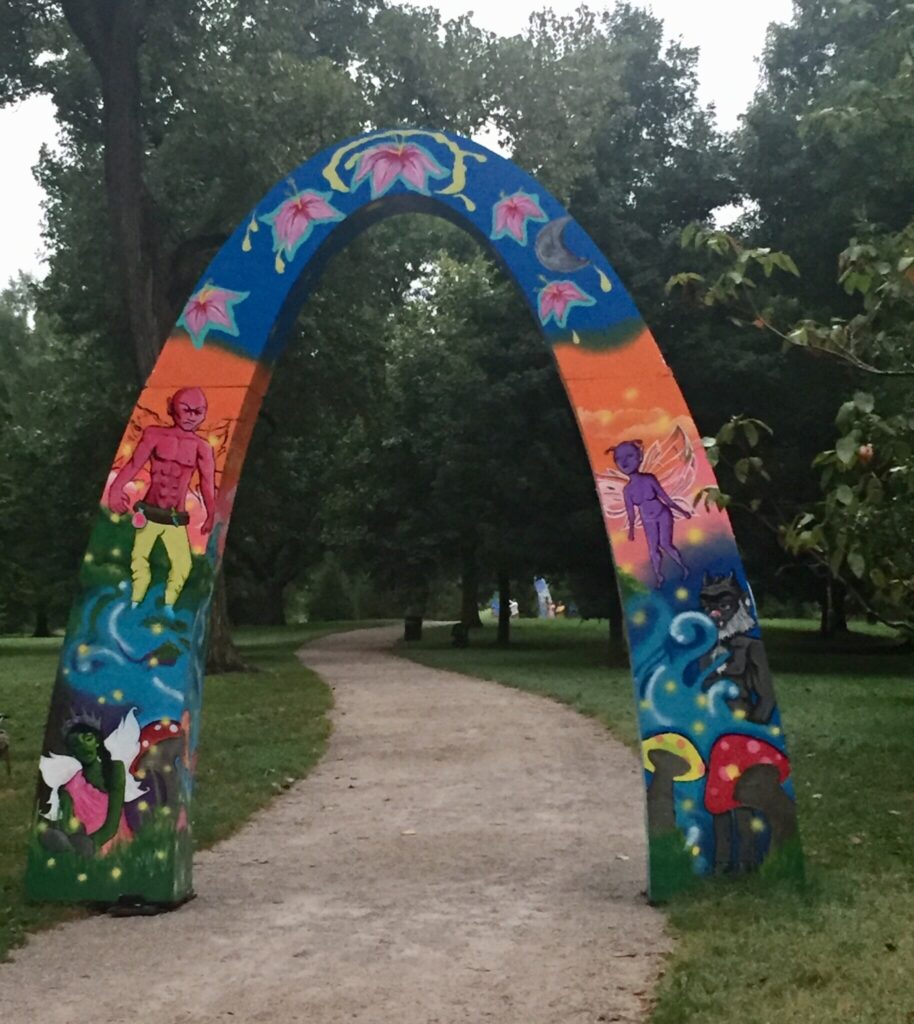 With backing from 14 generous sponsors, the event, which took place August 12 through September 6, featured 14 arches created by 14 local artists that meandered from Shakespeare Glen across from the Saint Louis Art Museum down the hill to Government Drive, around the Boathouse to the foot of the Grand Basin. 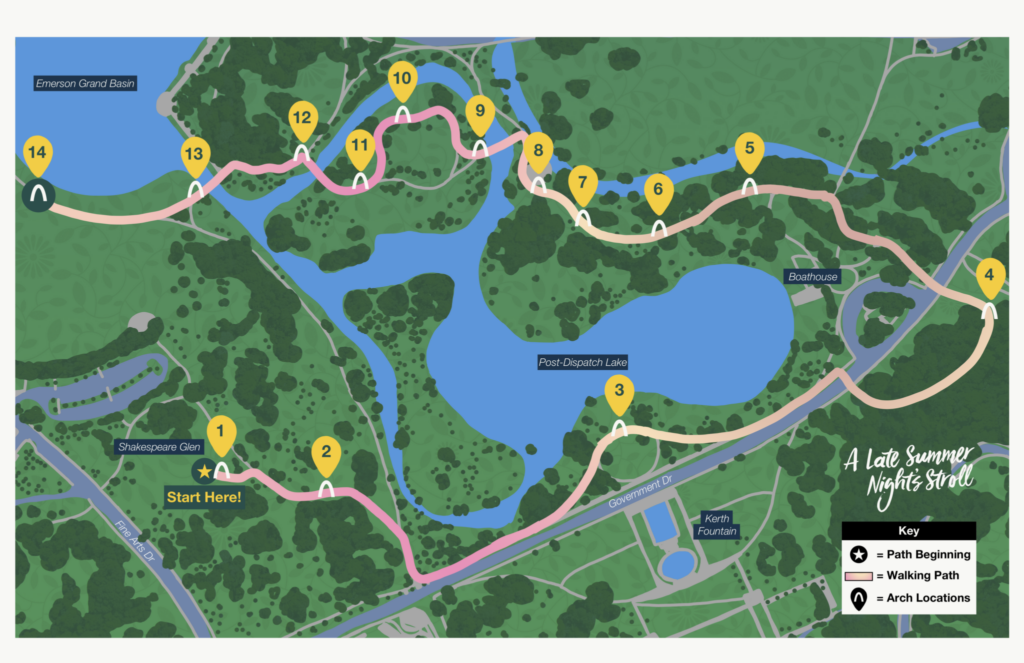 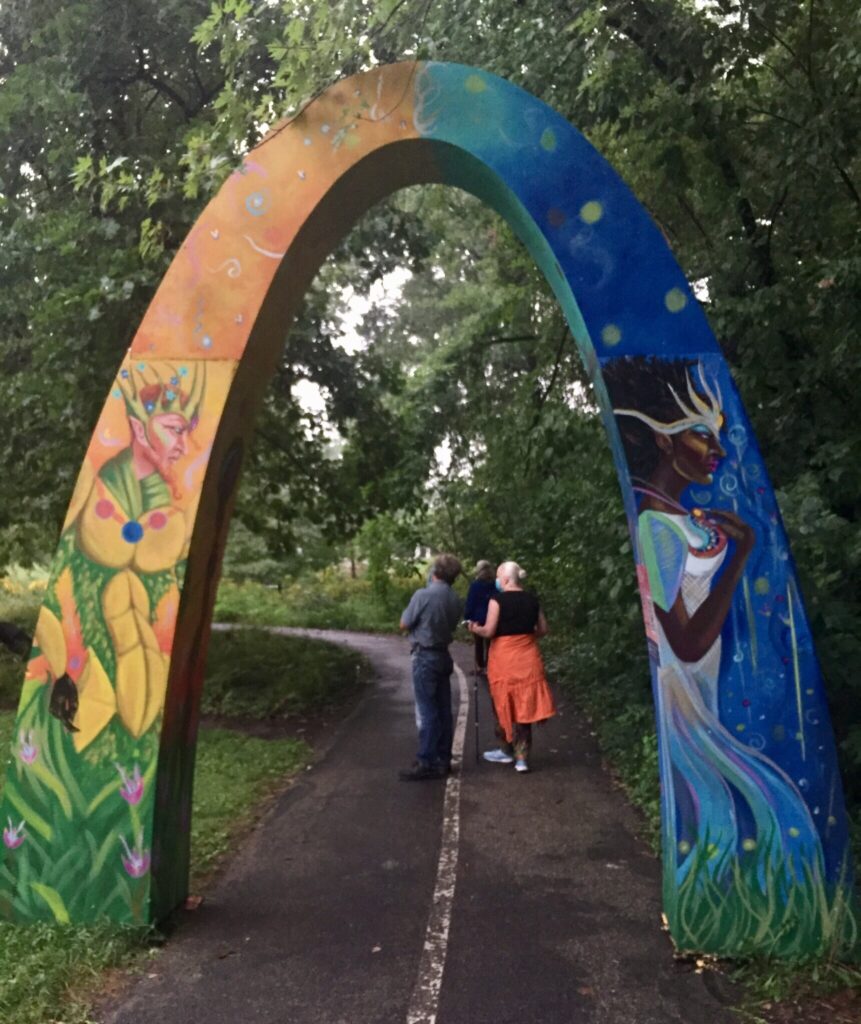 What awaited guests as they followed the path were performances by over 50 actors and musicians from 12 area arts organizations. 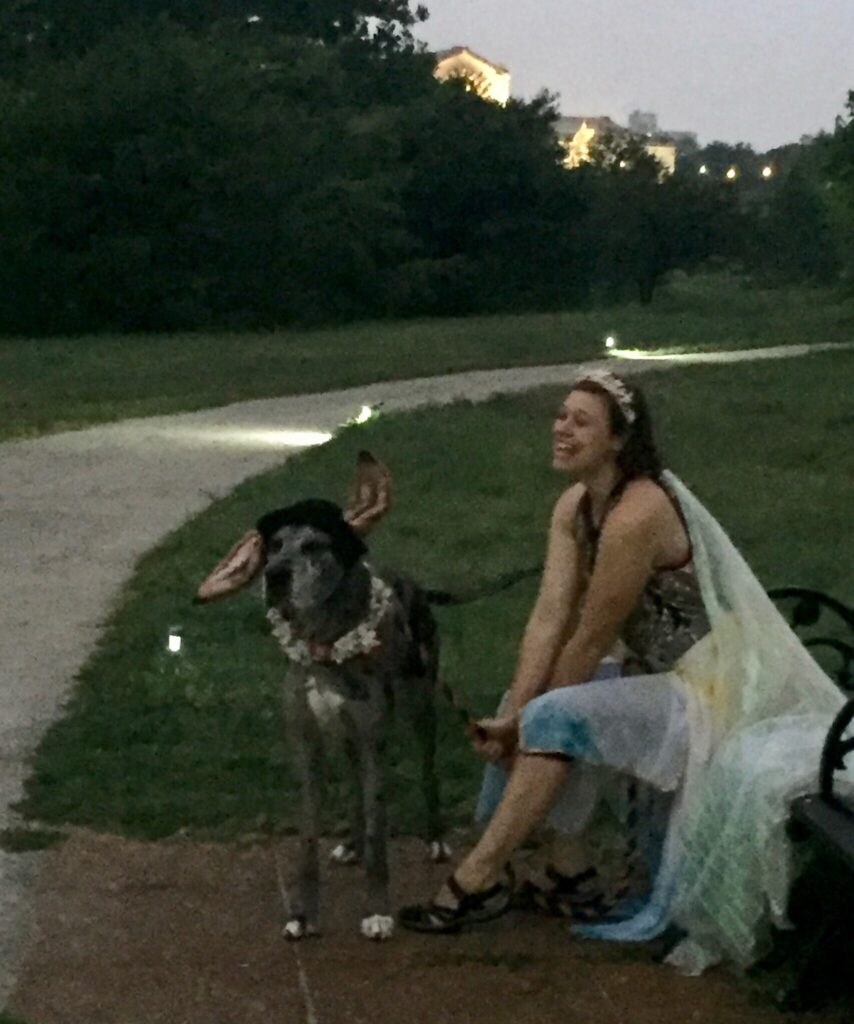 Shakespeare wrote the script for the 1st and 14th stops, while dialogue at the remaining 12 was written or composed by the presenting arts organization with vetting by the Shakespeare staff. 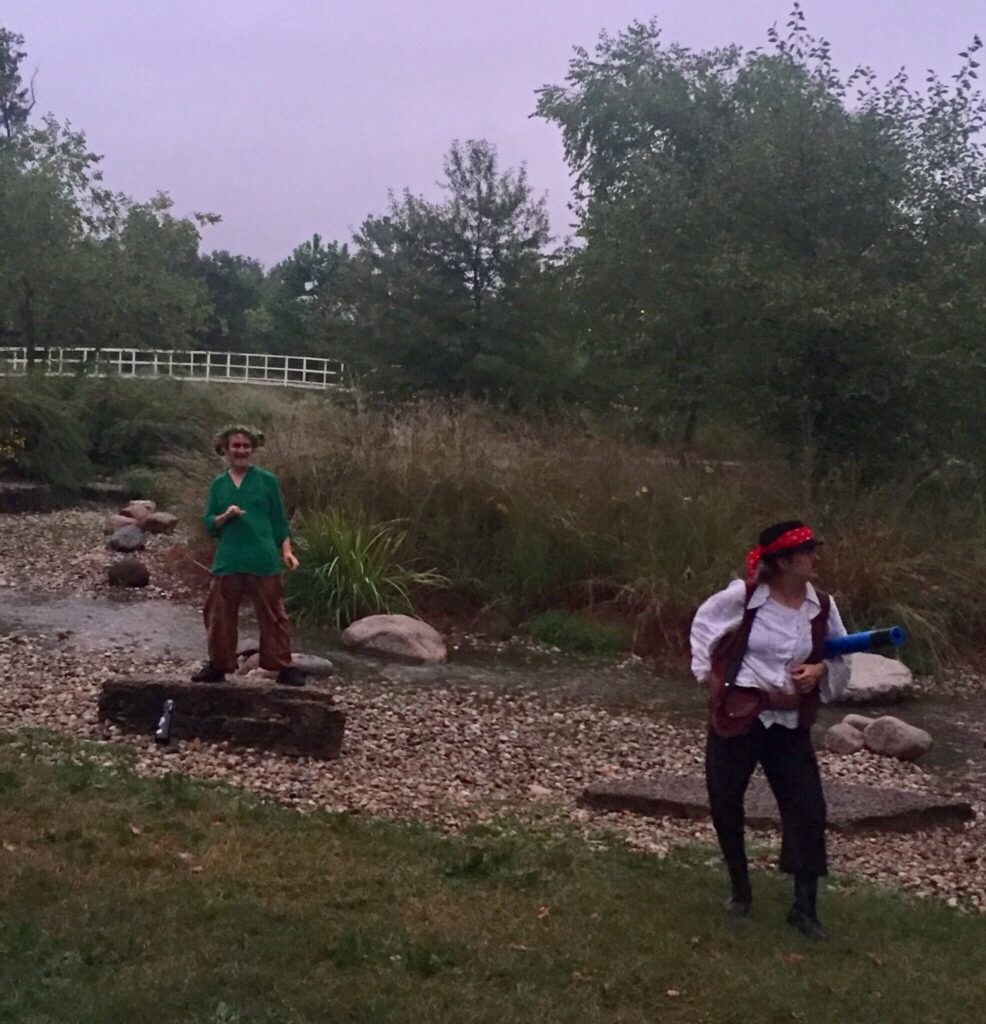 As a nod to current times, masks and measuring tape were incorporated as props. 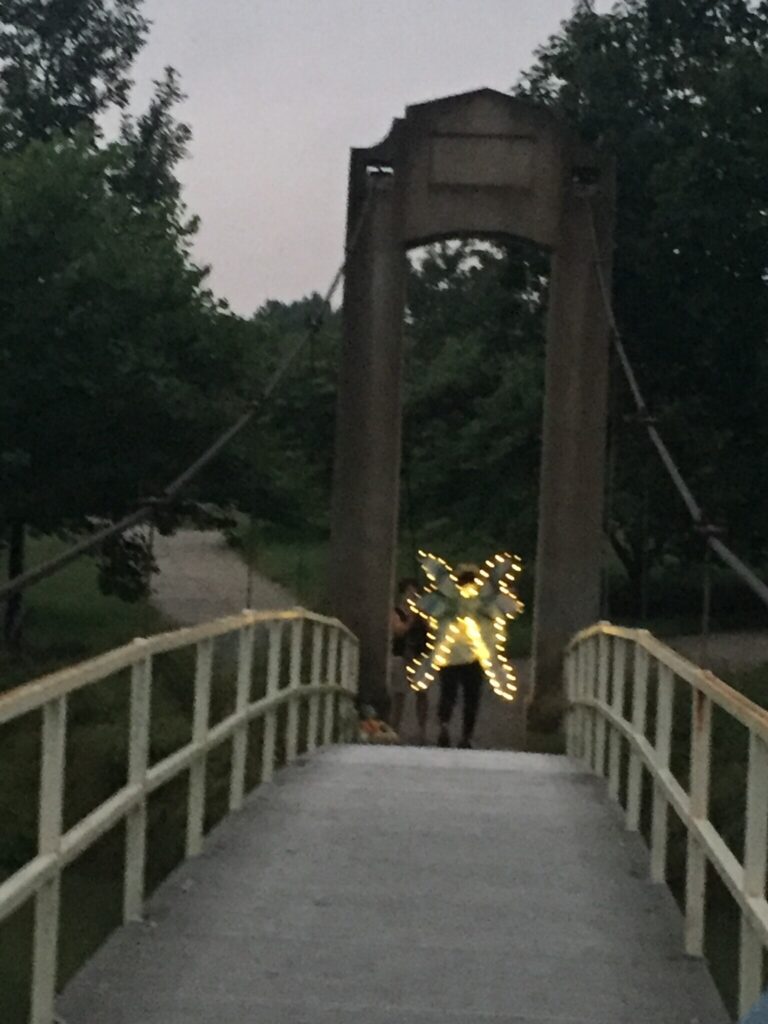 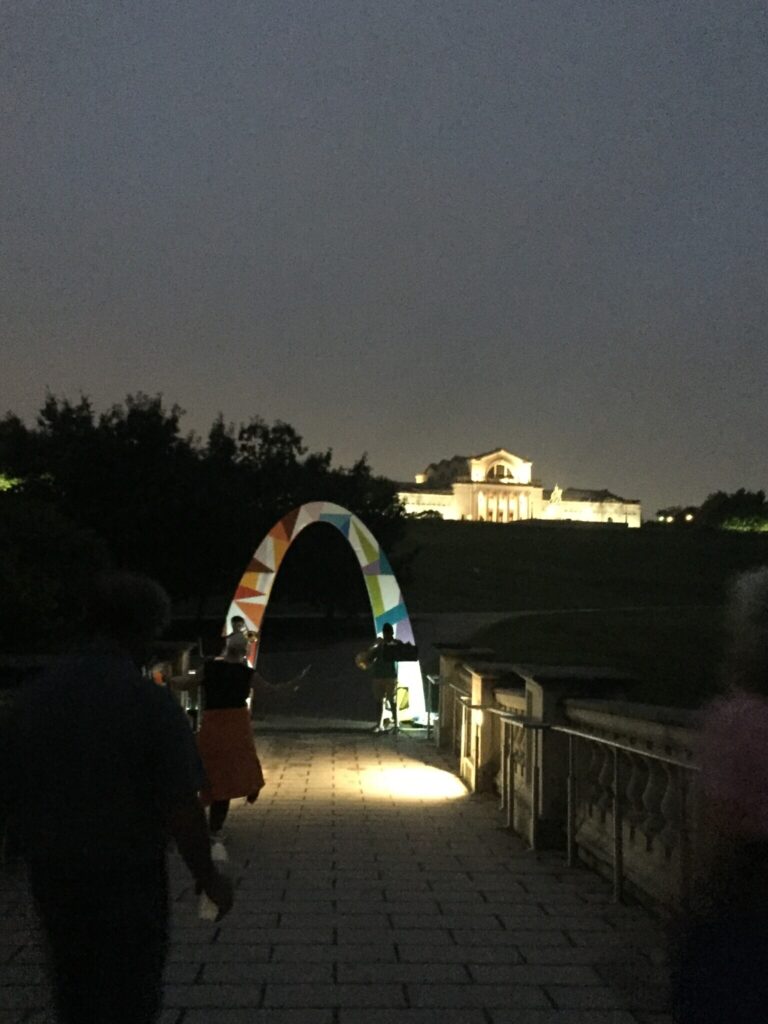 About 1,000 people (scheduled in socially distanced groups of 10) were able to attend A Late Summer Night’s Stroll  over 23 nights. It’s estimated that an additional 2,000 people scanned QR codes and took self-guided tours during the festival. The self-guided tour featured excerpts read by local actors paired with music inspired by or thematically related to the play. 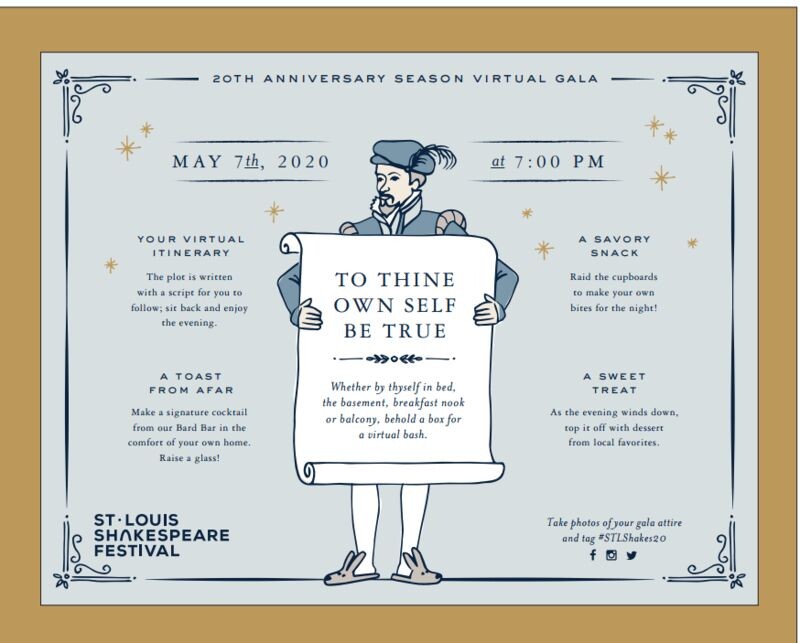 St. Louis Shakespeare Festival’s annual gala, which is vital to the organization’s bottom line, was on the calendar for early spring. Unfortunately, this event collided with the coronavirus shutdown so organizers quickly pivoted to a virtual gala, “To Thy Own Self Be True,” which was hugely successful netting more than was raised in previous years. And 2020’s gala was featured in an entertaining Bloomberg News report about hosting galas around the country during the pandemic titled Tuxedo Tops and Pajama Bottoms.

Thanks to CWEnder and Artistic Producing Director Tom Ridgely for sharing so much helpful information for this post, to CWEnder and Shakespeare Board Member Jessica Holzer for her input, and to CWEnders Beki Marsh and Janice Forsyth for all the great photographs. 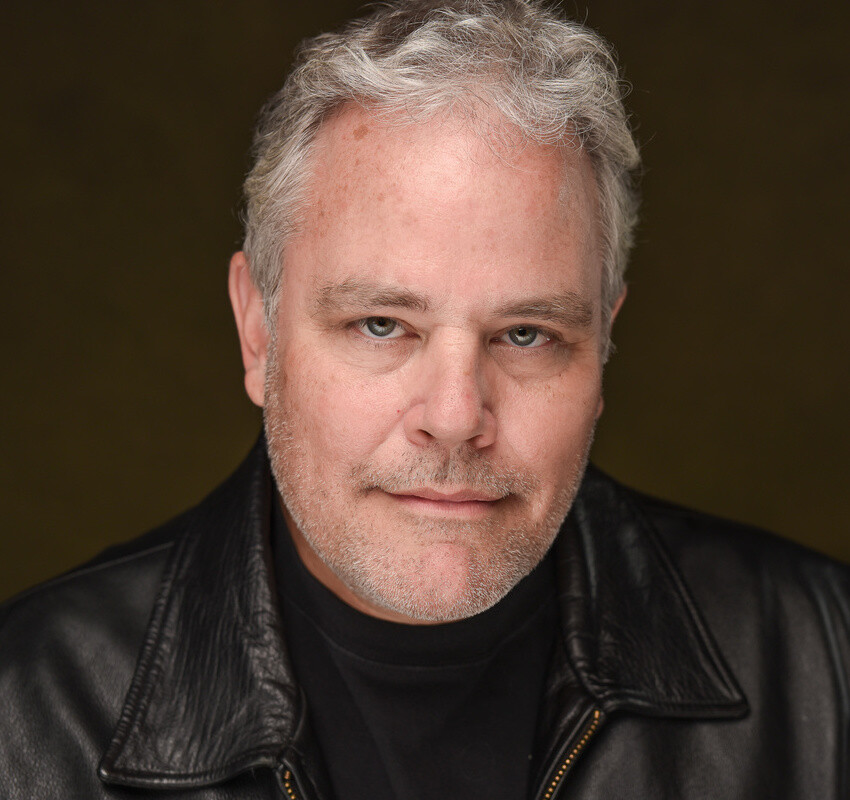 For 48 years CWEnder William Roth, above, has poured his heart and soul into the St. Louis theater-scene, both as an actor and as founder and artistic director of St. Louis Actors’ Studio, a 99-seat theater that opened at 360 N. Boyle in 2006.

To mark the occasion of the theater’s 10th anniversary, I posted an article about what drew Roth to the then derelict building that now houses the theater, West End Grill & Pub (Roth is a partner in that venture), and the recently opened Blue Strawberry.

Along with countless businesses across the nation affected by the pandemic, theaters and everyone associated with them—actors, stagehands, set designers, ushers, etc.—have also taken a huge hit. Looking for a way to keep his theater and other local theaters afloat, Roth dreamed up a novel fundraiser, the Small Professional Theater Sustainment Fund, which he described in an interview with Fox 2’s John Pertzborn in the news clip that follows.

As Roth set it up in the interview: “I’m not doing anything right now, and neither are they,” referring to celebrities with a St. Louis connection.  In the past, their busy schedules made it hard to get any of them to find time to help local theaters.

Here’s how you can get involved and help St. Louis Actors Studio and, if enough funds are raised, other local theaters as well: For a $75 donation you will receive 50 chances to have a 20-minute or so online video chat with one of the participating celebrities. Winners’ names will be drawn out of a hat on September 17. 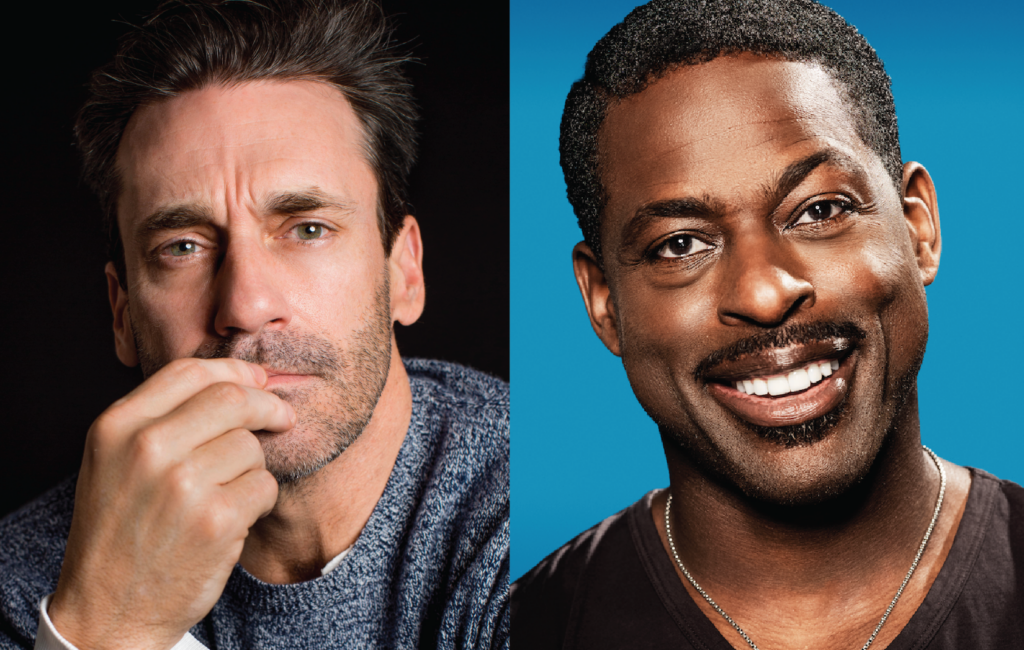 And if you’d like to watch Hamm and Brown again, here is Jon Hamm’s pitch for the fundraiser, and Sterling K. Brown’s is here.

Pitch in if you can. More information about St. Louis Actor’s Studio’s fundraiser can be found on the website.

A visit to Park-Like in Grand Center 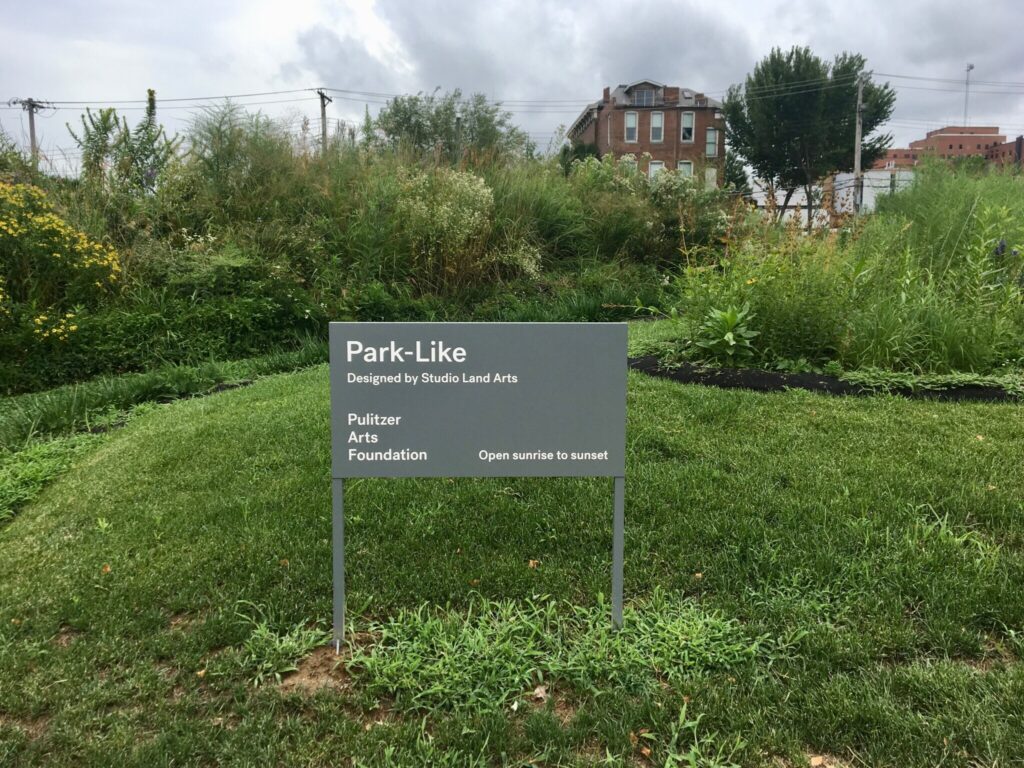 Exploring the Pulitzer-Arts Foundation’s new Park-Like installation for the first time last Saturday afternoon was a delight and yet a bit eerie. I was totally alone as I meandered throughout the park (located on Washington just east of Spring) and the only sound was a concentration of birdsong and humming insects—sounds you’d expect to encounter in rural areas, not bordering a normally bustling street.

Washington Avenue, the home of the Pulitzer, Contemporary Art Museum (CAM), The Sheldon, and the Fox Theater parking lots, would normally be filled to capacity on a Saturday afternoon. Some of the museums on Washington have re-opened but, judging from the absence of street traffic, the public may be unaware. More information about that at the end of the post. If you’re looking for excuses to get out of the house you will be rewarded with a visit to Park-Like soon and often. 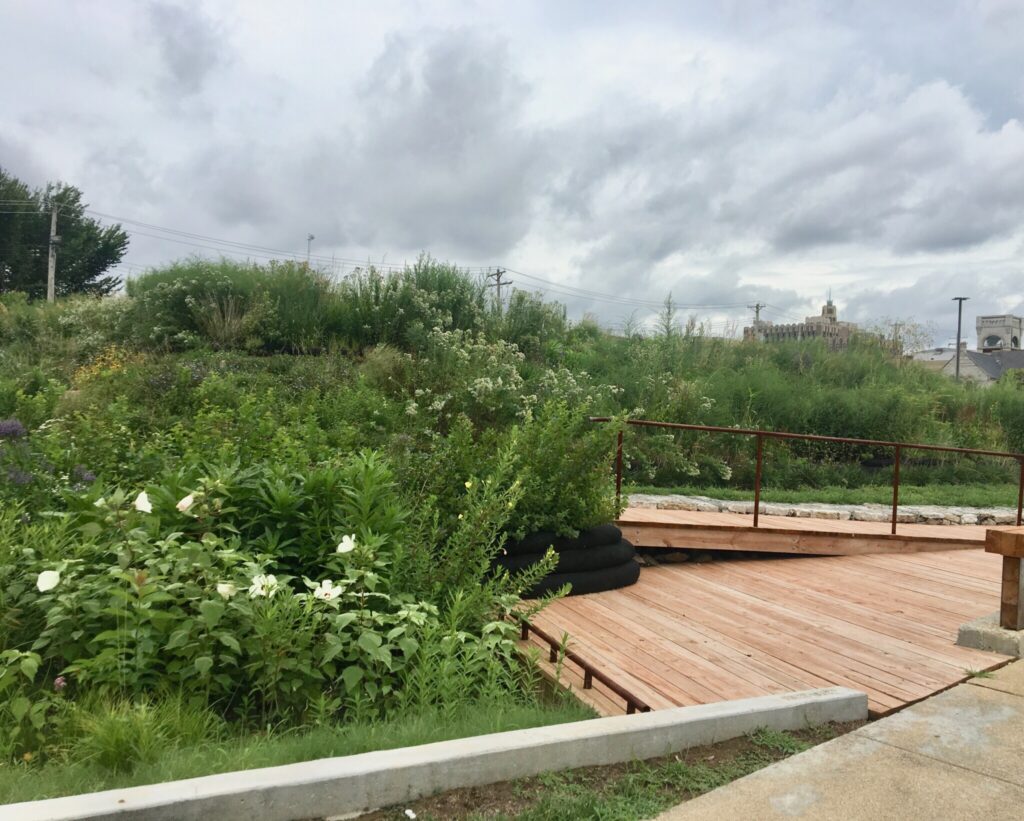 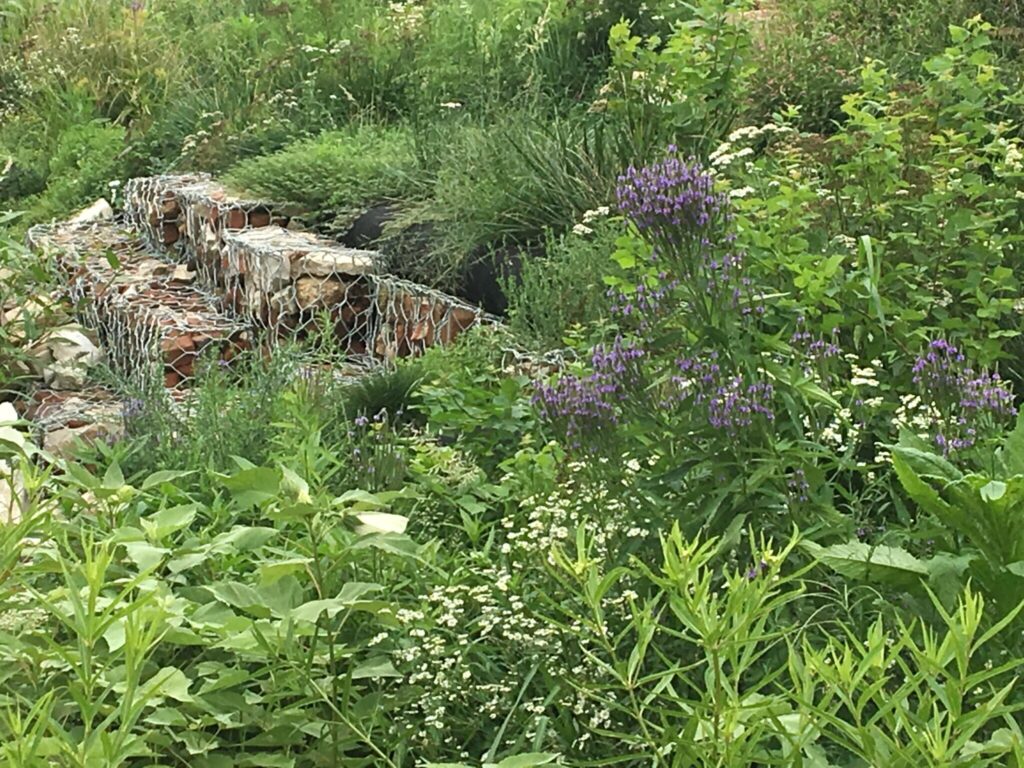 The park is dotted with found building materials and artifacts, above and below, that are now part of water filtration systems “to absorb stormwater runoff and reduce the impact on urban drainage and sewer systems.” 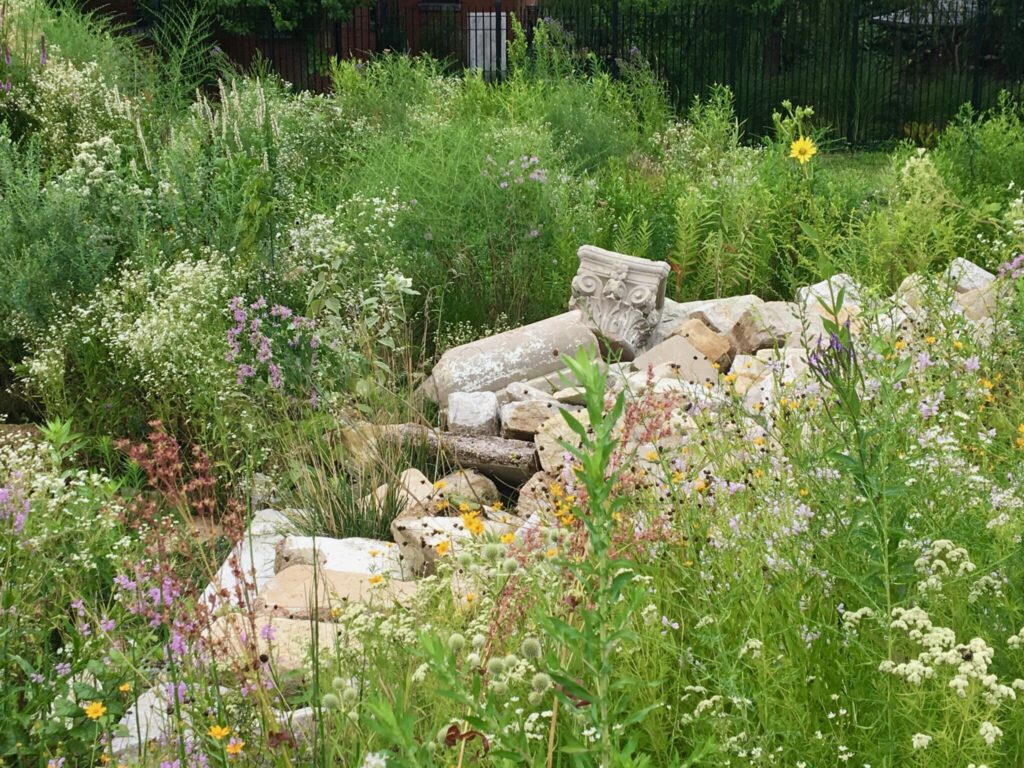 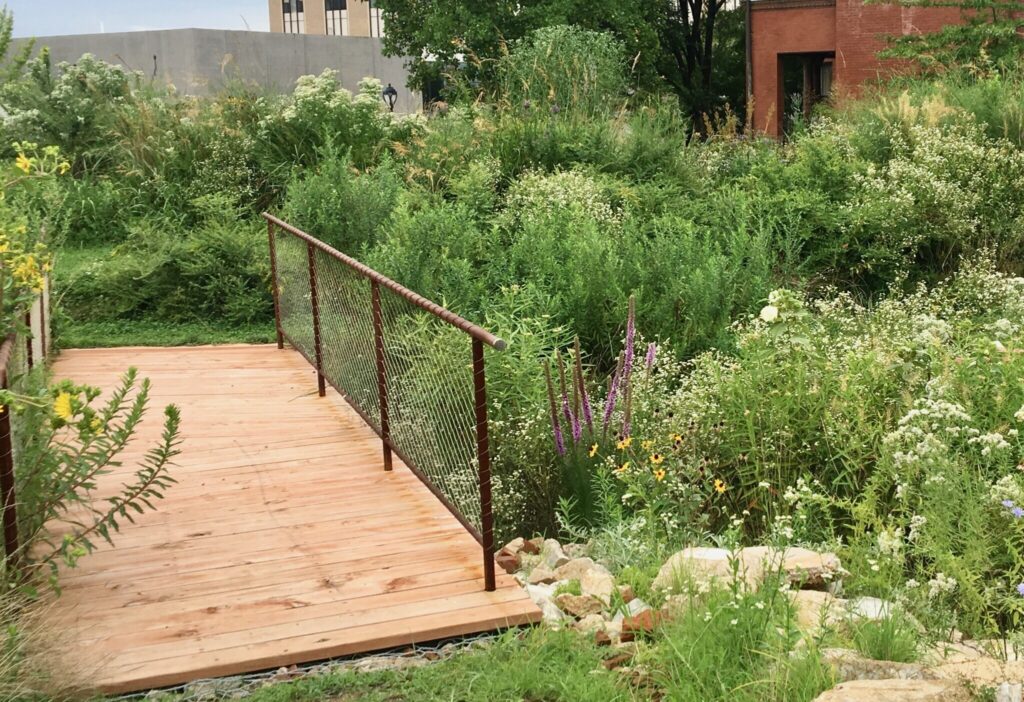 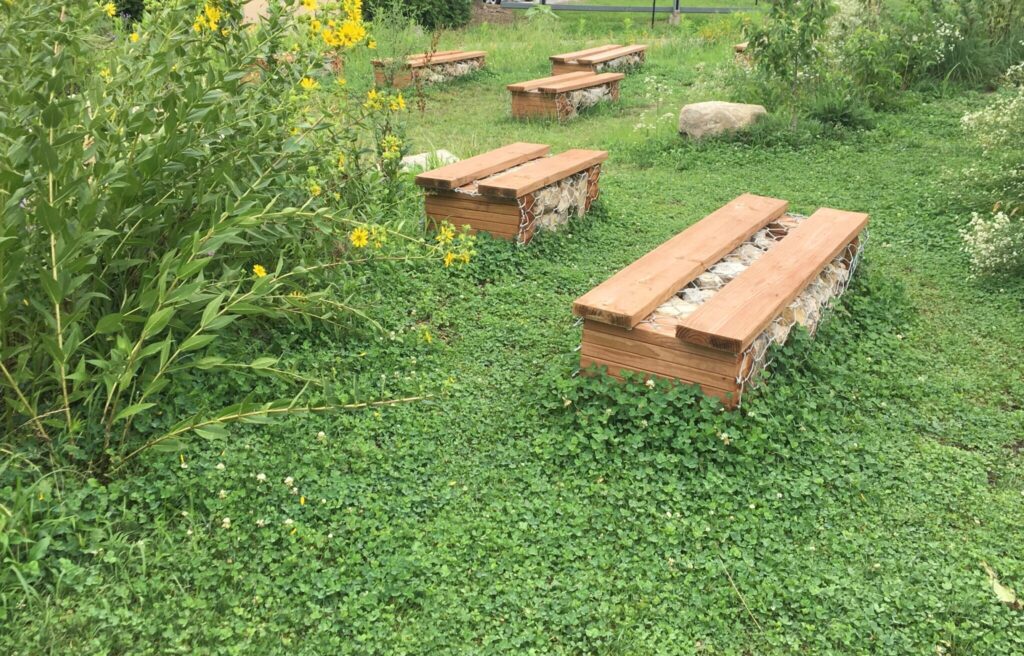 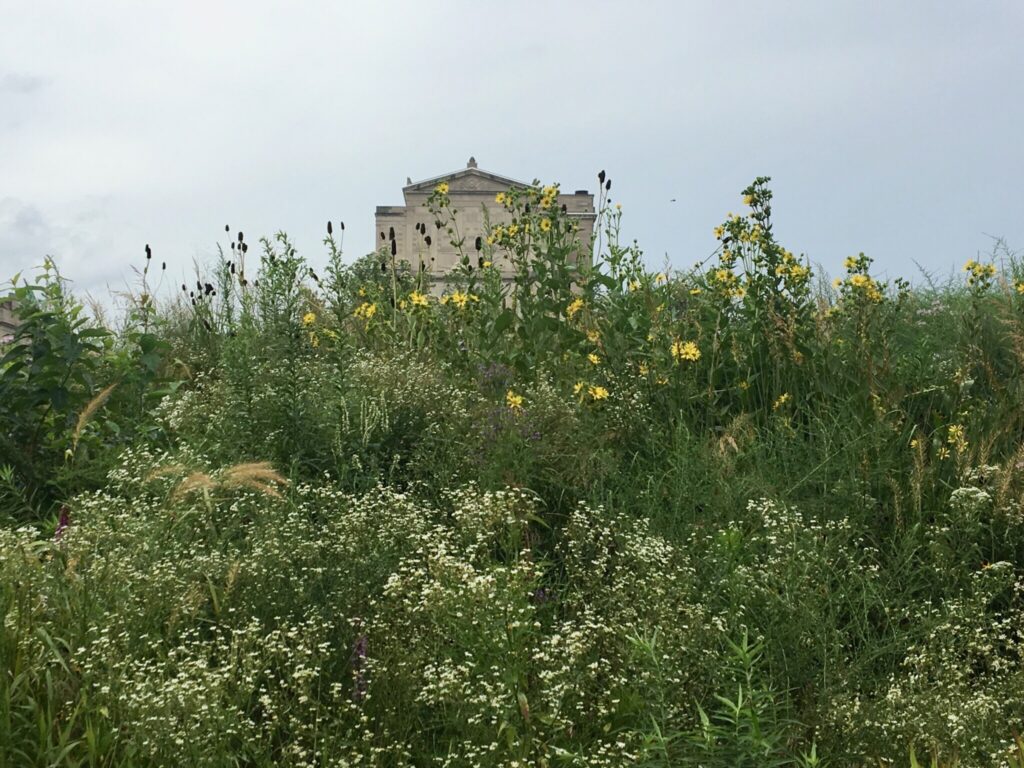 There is a series of small man-made hills, one of which frames a view of the back side of the Scottish Rite Cathedral on Saint Louis University’s campus on Lindell. 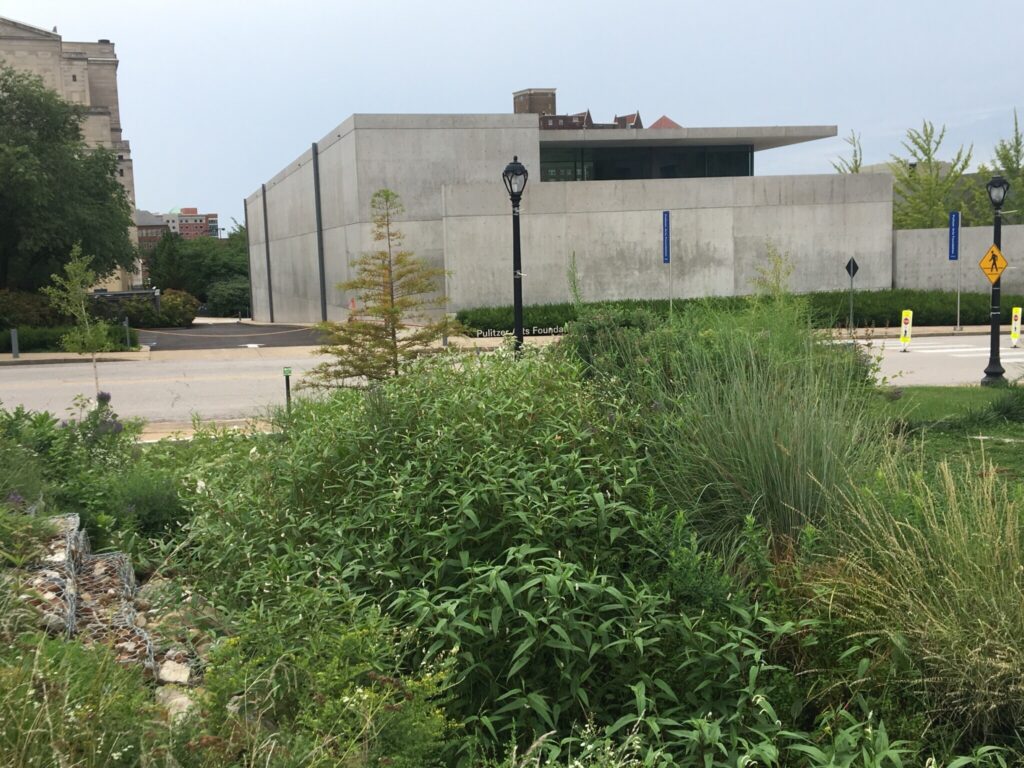 There will likely be more life on the street when the Pulitzer Arts Foundation, above, 3716 Washington, joins the other institutions and opens to the public August 13 through August 30. Book a 45-minute tour here for groups of up to 10 people. Entry to the museum is free. In the meantime, CAM is open. Visit the website to sign up for free timed-entry tickets. The Sheldon is offering timed-entry tickets to “Golf the Galleries,” a playable mini golf course for the whole family, $5 to $10.

Park-Like, 3700 Washington east of North Spring is open daily from sunrise to sunset.