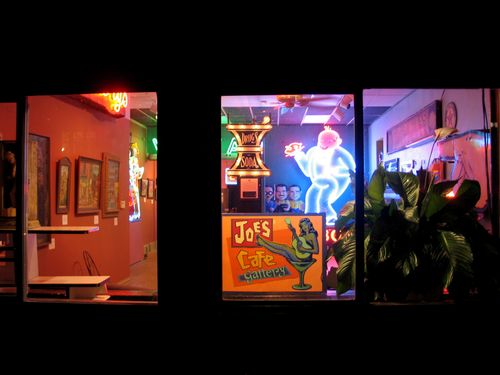 Last year, when artist Bill Christman opened his Ars Populi Gallery in the Skinker/DeBaliviere neighborhood, it turned out that none of his followers could later recall the name of the gallery or “get” why he chose it. So in late September, Ars Populi was renamed the more generic “Joe’s Cafe Gallery” to coincide with the opening of the current exhibition featuring paintings by entertainer Frank Moskus, and the photography of Thelma Market Blumberg. Bill said that he is very proud to have given these two artists their time in the spotlight, as neither had exhibited their work previously.

To say that Bill Christman does nothing by the book would undoubtedly unleash many accounts of his offbeat humor from his many followers, including yours truly. If you’ve been to the City Museum. you’ve probably seen Christman’s “Beatnik Bob’s Museum of Mayhem, Mystery and Mirth.” His passion however is the creation of unique signage which he fashions in a workspace behind the gallery. (A good example of Bill’s artful signage–shown in window above–can be found over the entry to the neighborhood’s Left Bank Books.) 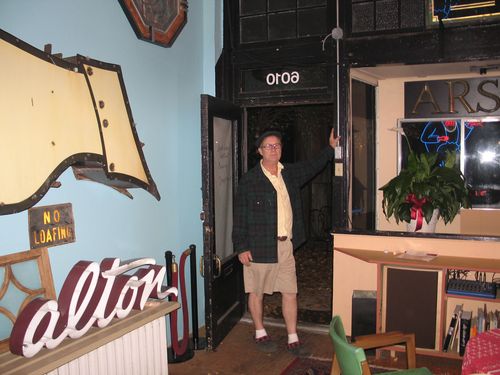 Joe’s Cafe Gallery is an example of Bill Christman’s, above, quirkiness. To start,
the gallery is only open on Thursday evenings from 7 to 10 p.m. This coincides with Bill’s music venue next door—Joe’s Cafe, which is open only on Thursday nights as well. (By now you’ve probably surmised that there is no “Joe.”) The Cafe is a BYOB non-profit club (see ** at end of post) with reasonable dues and few membership requirements, other than age–30 and up.

When I visited the gallery last Thursday evening Bill was on his way over to the Cafe to introduce that evening’s band, Acoustik Element. So I had a great time touring the exhibition by myself while listening to the band’s Latin-inspired music piped over the speakers in the gallery. 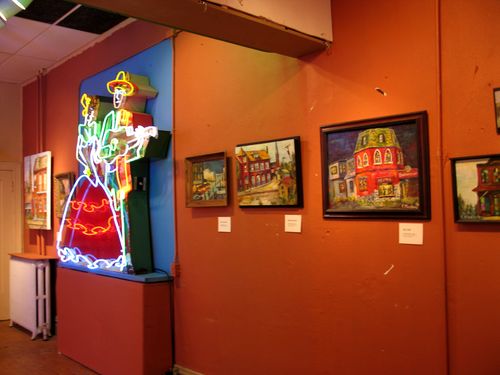 Frank Moskus, whose paintings are shown above and below, is described on Bill’s website as “a big, funny, foul-mouthed Lithuanian-American whom he met when the Gaslight Square tavern keeper and entertainer lived on the riverfront in a packet boat called ‘The Yacht Club.'” Last Thursday, Bill told me that Frank was a true character (look who’s talking…), a natural performer who played music in bars he owned on Gaslight Square. 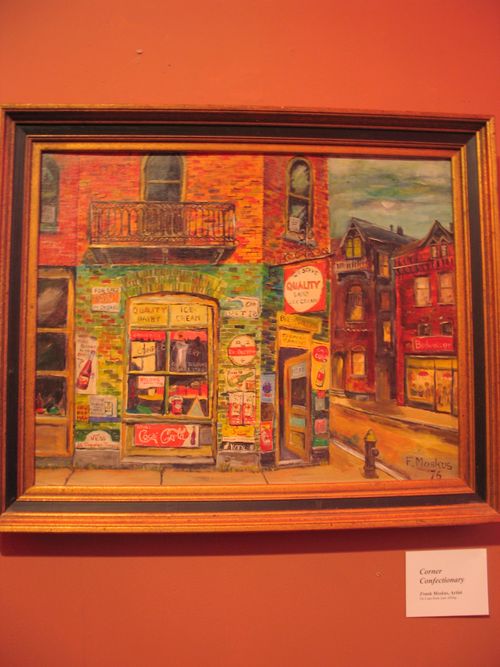 I photographed a couple of Moskus’s paintings including “Corner Confectionary,” and 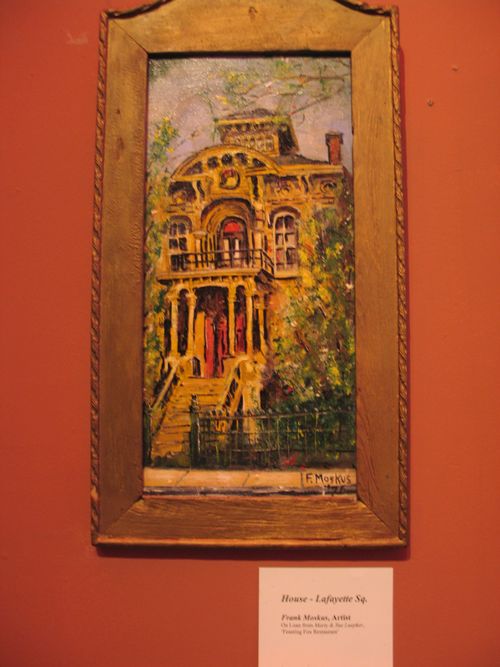 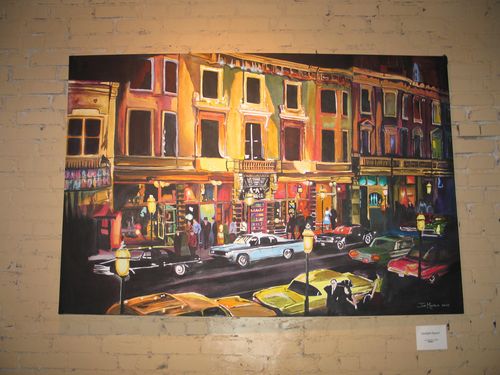 Frank Moskus’s son, Joe, is also a painter. His lively work, above, reminiscent of his father’s, is exhibited in a back room of Joe’s Cafe Gallery. 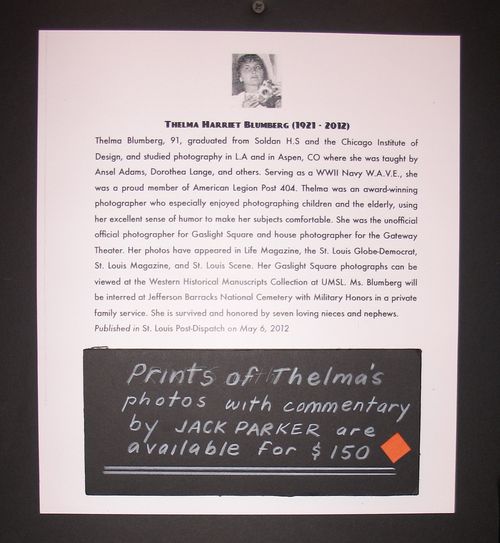 I was especially fascinated by Thelma Blumberg’s photography of Gaslight Square during its heyday from the late 1950s through the ’60s. According to the bio, above, Thelma Blumberg was the entertainment district’s official photographer. 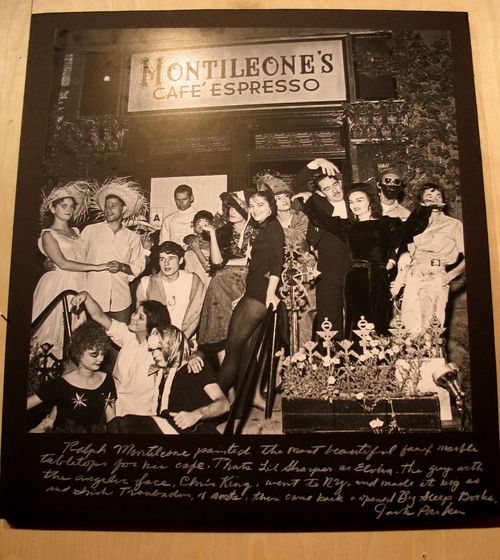 Jack Parker, who wrote the descriptions for each of these wonderful photographs, had a front row seat to the goings on at Gaslight Square from his restaurant, O’Connell’s Pub, which was  relocated to 4652 Shaw at Kingshighway from its original location on Boyle. Jack identifies the “guy with the angelic face” in the photograph above, “as Chris King, who went to N.Y. and made it big as an Irish Troubadour, and then came back to open Big Sleep Books.” Chris’s son, Ed, still runs Big Sleep on Euclid at Maryland along with Helen Simpson, the wife of Chris’s partner, Peter (see earlier post here). 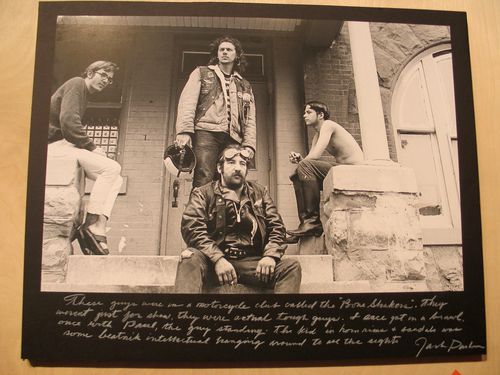 Jack’s description of the motorcycle gang, “The Bone Shakers,” includes a quip about the “beatnik intellectual (left) hanging around to see the sights.” 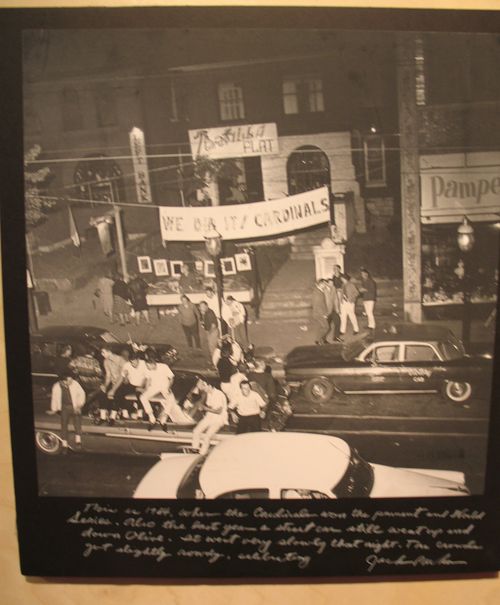 The photograph above shows the celebration in Gaslight Square after the Cardinals won the 1964 World Series (oh, well). 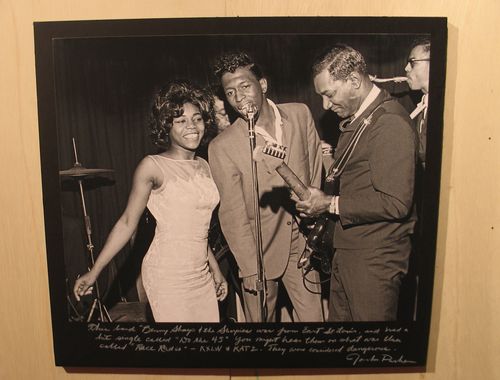 “Bennie Sharp and the Sharpies,” an East St. Louis band, performed in the Square. Their hit single was “Do the 45.” 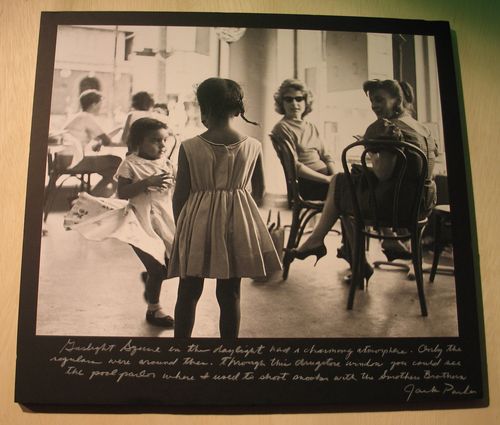 This 1961 photograph shows patrons in a drugstore on the Square. On this photograph Jack writes that he played pool with the Smothers Brothers in the pool parlor visible through the drugstore window. 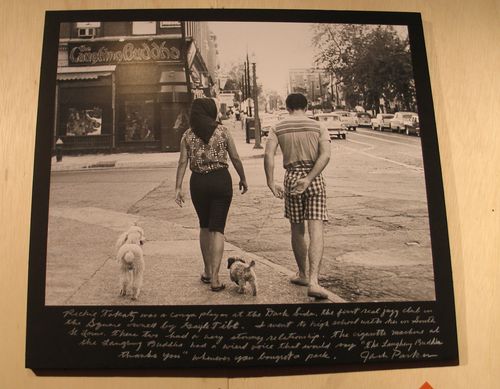 Blumberg’s fascinating photographs are priced at $150 each, which seems like a fabulous price for a window into the neighborhood’s storied past. 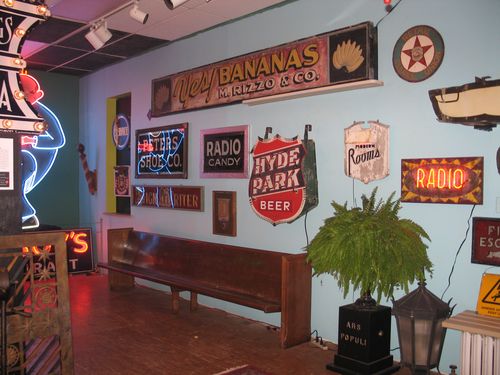 Joe’s Cafe Gallery also features a collection of signs on loan from collectors around the country, above, whom Bill said all know each other.

The current exhibition will be on view until Thanksgiving. Joe’s Cafe Gallery, 7 to 10 p.m. Thursdays only,  6010 Kingsbury Avenue, joescafegallery@gmail.com, (314) 862-2541. You have to live in Skinker/DeBaliviere to figure out how to get around the streets of this neighborhood. Do yourself a favor, park on Des Peres at Kingsbury and walk in.

**You don’t have to be a member to attend a Thursday night performance at Joe’s Cafe. The cost for non-members is $10. Bring your own drink and food, you must be at least 30. See this Thursday’s line-up below.

“A reliable cure for a Cardinals hangover”

Joe’s is a non-profit BYOB club, open on Thursday nights.

Alcohol consumption ends at 10:00
Recycle your own stuff

Smoking outside only
Park on Des Peres Ave.

Rothschild’s Antiques is on the move