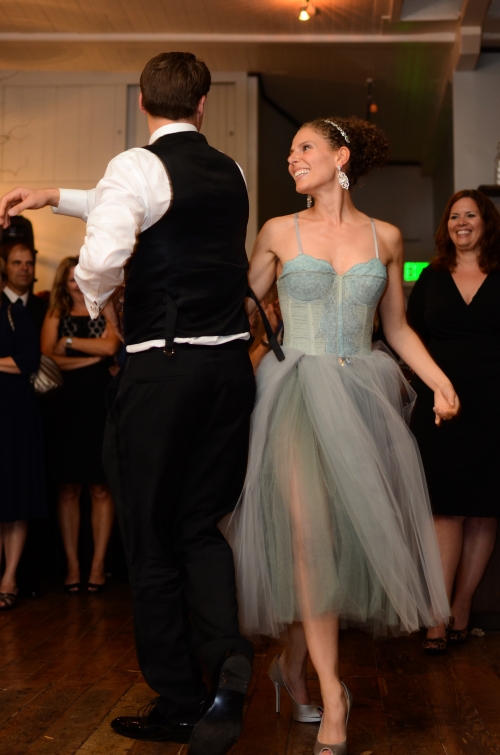 Photo courtesy of Ben Larson
This is a story about a wedding dress that's best told by the email exchanges I have copied below.
Hi Nicki,
After many google searches, I came across your blog and your article about Kelly Reding.  I just want to thank you for that post, because I've been searching high and low for the designer of the Ballerina dress from "Sex and the City."  I can't tell you how many google searches I've done!  So, I just wanted to send you a quick thank you.  If it wasn't for your blog, I would have never learned of Kelly Reding.
I've reached out to Kelly in hopes that she can make a replica of that dress for my wedding.  I hope to hear back from her….
So thank you again for making the connection for me!  I've never been to Central West End, but my fiance's sister lives near St. Louis, so when we visit her, I will be sure to check out your neighborhood, I love quaint historic pockets.Take care, Sharon Cercone
Dear Sharon:
How exciting that you found my blog and thus found Kelly. She is an amazing designer and is going to be opening a shop within a vintage clothing store in the neighborhood in August. I am copying her on this so that we can double-team her and let her know how wonderful she is! Thanks for writing!
Hope you do visit the CWE someday. Thanks again. Nicki
Thank you Nicki!!
I like the double-team effort.  I am so thrilled about this dress, and the ironic thing is, my formal wedding dress for our Catholic Church ceremony is another dress I fell in love with from "Sex and the City" (the Badgley Mischka dress Carrie Bradshaw wore to the Black and White Ball in Season 4).  A lovely, lovely elegant and somewhat royal dress, but I won't be able to wear it all day and night – way too formal, hard to dance in – so the Ballerina dress will be a perfect evening reception dress – very fun, cute and right in line with my style…  fingers crossed Kelly can squeeze me in.  : )
But enough about my wedding (obviously I am very excited!)….THANK YOU for your blog….it is a true gem!  I am going to share your blog with my fiance's sister who lives near St. Louis, and I will also promote Kelly's design to my friends! I have a feeling I will definitely visit CWE and Kelly's new store.  I love supporting talented designers and local businesses that bring warmth and charm to neighborhoods.
I am grateful for your help!  If all goes well, and I end up with this dress (fingers crossed!!), I will be sure to share pictures with you!
All the best, Sharon
Kelly did make the dress for Sharon, though in a different color than the original, and sent it off to San Francisco several weeks ago.
On September 4…
Our wedding was beautiful.  More perfect than I ever imagined. The dress was a hit (see above)!!  Thank you both.  Xoxo, Sharon

Kelly Reding's shop, Dauphine, 447 N. Euclid, Saturdays, 11 to 6 or by appointment, (314) 651-9680.
P.S. – I am thrilled(!) that a google search initiated from 2000 miles away would result in a custom order for a talented designer right here in the neighborhood. To repeat what the bride said, "I love supporting talented designers and local businesses that bring warmth and charm to neighborhoods." So do I, and so should we all…it's part of what makes this a truly vibrant place.

Dauphine and Borough Vintage are hosting a Fall Faire this Saturday, September 10. You are invited to view fall fashions,and enjoy vintage cocktails & appetizers, 6 to 8 p.m., 447 N. Euclid (at Washington).

A Little Bit of Vegas in the CWE

[Today's post is from David Strom, a five-year CWE resident who is an internationally-known IT security and networking expert. The Strominator writes about computer technology for a number of websites, including the New York Times and has published two books on computers.] 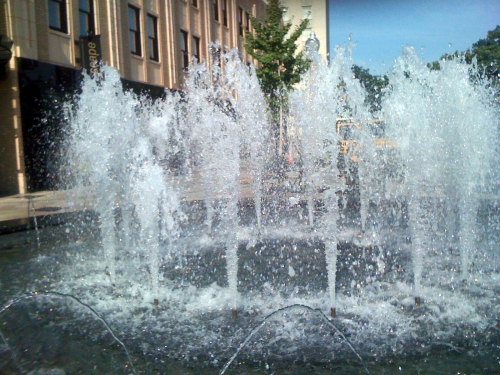 Those St. Louisans looking to find something to remind them of Vegas don't have to venture very far from home, nor gamble their nest egg downtown, especially if they are interested in thrilling water fountain displays. I am talking about our own fountain on Maryland Plaza, which was designed by Wet Design, the Burbank-based team that did many of Sin City's fabulous water displays at the Bellagio and City Center complexes. You can also see several of their fountains around the state, including one inside the Ameristar Casino in St. Charles and an outdoor display at the Branson Landing shopping complex.

Our CWE fountain sits in front of what was Design Within Reach and is now a new home furnishings store called 10Denza. In the basement of the store are the pumpworks and controls that are used to make the magic of the fountain, and we got an exclusive tour by the building's management. (See some photos below of the various machinery involved.) 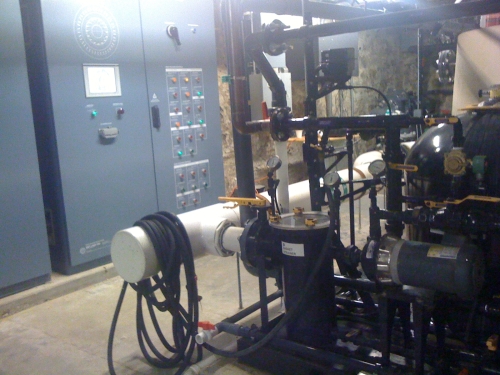 There are a series of three main water pumps, recirculating tanks, computer control systems and lighting electronics. There is a lot of piping to handle all the various sprayers and decorative features, as you can see below. The city water is augmented by a bromide solution to reduce algae growth, as any pool owner can attest. There are also a variety of filters and strainers to prevent various objects from clogging up the waterworks. 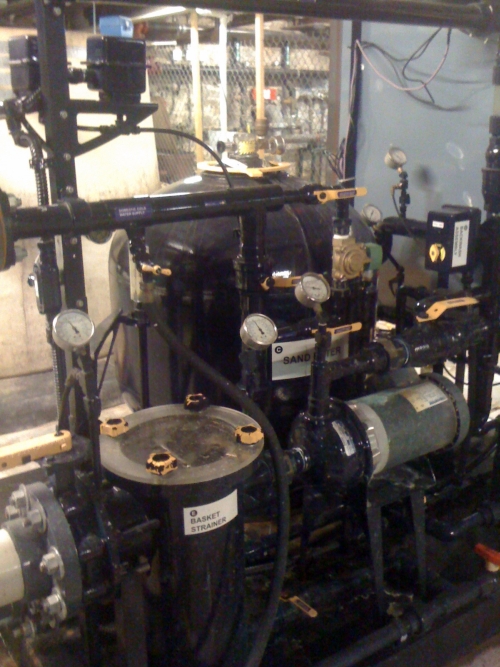 The fountain is composed of a basin with an inner ring of 16 streaming narrow-focused jets complimented by an outer ring of 40 arching streams. The jets can reach 15 feet in the air, close to the top of the Mandarin outdoor lounge directly above. Actually, they can go much higher but have turned down because of safety issues with spraying too many people or cars if were set on their full strength. The sprayers also detect wind conditions and can shut off automatically in high winds. 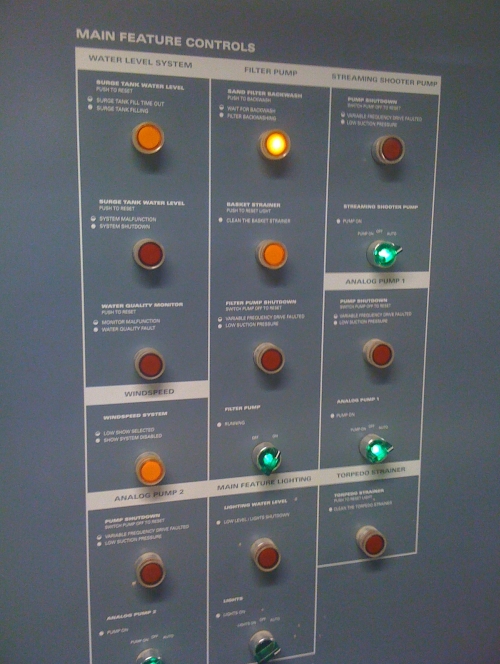 There are four pre-set "programs" of varying lengths that combine both lighting and fanciful water displays. These are set manually by one of the maintenance workers or by Ted Koplar himself, using the control systems pictured above. As one grandparent told us as we were doing our interviews, the fountain is a big destination for their grandkids during the warmer months.

The fountain was paid for by the Koplar organization and replaced an older and much more staid model that was located in the middle of Maryland Plaza street. The current one is of course part of the sidewalk and much more pedestrian-friendly, indeed, too friendly as there have been incidents with broken glasses and other objects tossed into it. More than $100 of coins are also collected by the fountain, which are donated to charity when the fountain is cleaned. It goes through its annual maintenance cycle during the winter months, where the water features are turned off and a sculpture or tree is placed on top of the base.

To learn more about David Strom read his blog, The Strominator, here.

Heartfelt thanks to David for offering to be the first of what I hope will be more guest bloggers; and for getting us behind the scenes of the Maryland Plaza Fountain. If anyone else would like to fill these pages with neighborhood news, views, or a series of photos, just send me an email and we'll discuss it.

And many thanks to the Koplar organization for letting David crawl all over the "nerve center" of the beautiful fountain that has brought so much pleasure to those of us who live here and to the many people who visit the CWE. 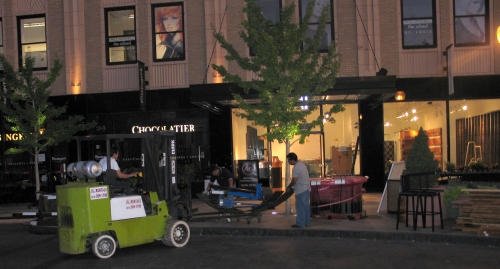 A press release from Frances Thompson, Marketing Director of Maryland Plaza, announced that AG on Maryland Plaza wanted a fresh new look and is undergoing a quick "nip and tuck." The three-day renovation began last evening around 5 p.m.  AG will re-open this Thursday…fast recovery! 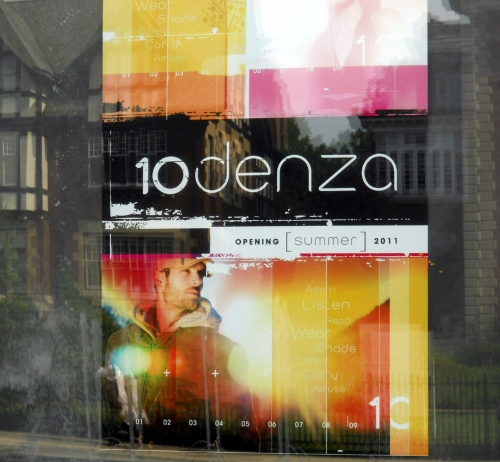 Next door at 44 Maryland Plaza, 10denza, a new retail concept is set to open around August 15 in the space formerly occupied by Design Within Reach. St. Louisan Chris Lanter's exciting new store combines pop culture, modern-city-style music & media coverage. Merchandise will include apparel, personal tech gear, shoes, music, and books. Chris emailed that a formal Grand Opening is slated for September, but I'll be there as soon as 10denza opens to check it out. What a great addition to the neighborhood!