Author Antony John weighs in on the Writer’s Block 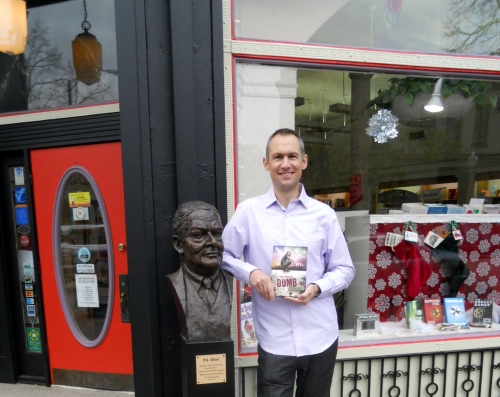 I was more than thrilled when CWE-based author Antony John took me up on an offer to write a guest post for this blog. While I had suggested a couple of topics he might consider, being the clever writer that he is, John wove the ideas together and created the eloquent piece that follows.

If you haven't had the pleasure of meeting this talented and very funny Brit, stop by Left Bank Books Wednesday, September 16 at 7 p.m. for the launch of his latest YA (Young Adult) novel, Imposter.  I've learned that YA novels are favored by many older readers too. In addition, read more about the author on an earlier post here.

“The Writer’s Block” Unblocks This Writer

When my wife, Audrey, was recruited to Washington University Medical Center in early 2008, I honestly hadn’t heard of the so-called Writer’s Block—at least, not the geographical version that refers to a stretch of Westminster Place just east of Euclid. As a soon-to-be-debut novelist, I was already well acquainted with the other, more tedious form of writer’s block, but this was something truly remarkable: a place where both T.S. Eliot (#4446) and Tennessee Williams (#4633) had spent parts of their childhoods. In a stroke of exceptional good fortune, it became the place we call home.
Though it’s true that Tennessee Williams didn’t love St. Louis, the city is nonetheless bound up in his work. His earliest performed plays were premiered at The Wednesday Club (now the Learning Center) at #4504 Westminster in 1936. They were well received, a first step to his greater successes with plays like The Glass Menagerie, which is set in a facsimile of his Westminster Place apartment.
TS Eliot left St. Louis’s “yellow fog” too, of course, but St. Louis didn’t leave him. Settling in England, he simply substituted his fascination with the Mississippi for the Thames. Both are large, powerful, and brown—it must have reminded him of home.
We’re spoiled in the Central West End. The bronze busts at Writers Corner (at the intersection of McPherson and Euclid) commemorate the lives not just of Eliot and Williams, but also Kate Chopin. Soon, William Burroughs's bust will be added too (though one wonders what he would have made of that). And of course, anchoring everything literary, is Left Bank Books, one of the most revered independent bookstores in the country.
I like to think that Tennessee Williams would have a happier time if he were living on Westminster Place today. The street hums with a contentedly low-key kind of energy, and the ti-block committee keeps neighbors interested and invested in the future. It’s perhaps more cosmopolitan than it was in either Eliot’s or Williams’s day too, a delightful mix of born-and-bred St. Louisans and transplants from all parts of the country. And just as England claimed Eliot, so Westminster Place claims several Europeans as residents, with folks from England, France, Spain, Italy, Holland, and elsewhere.
Personally, I love wandering along the street and pausing beside the one-time homes of these famous writers. I’m still waiting for some of their genius to rub off on me, but that’s okay . . . unlike them, I can’t imagine ever wanting to leave.
Many thanks Antony, this is fabulous! See you Wednesday.
0 Comments
Upcoming events
Search archives