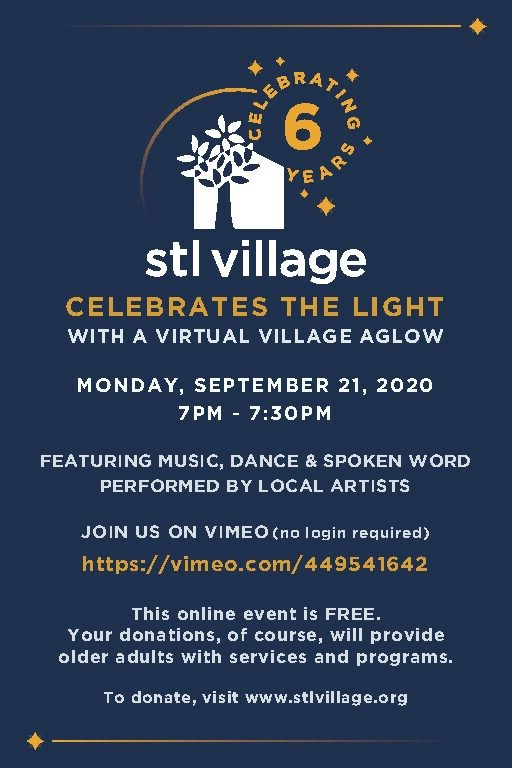 Virtual program will feature a variety of local talent

In 2020, STL Village continues to be a bright light for older adults in our community. During this challenging time, our mission of bringing services and companionship to those who would otherwise be isolated has never been more critical.

To keep this light shining bright, we invite the public to support our community of caring by attending our virtual event:

The sixth annual Village Aglow gala is free to view and will be streamed online at:

While no tickets or reservations are required to view the event, the goal is to raise $25,000 for STL Village operating expenses. This annual fundraiser is a significant source of financial support for the nonprofit’s services to members as well as its community outreach programs.

“We are neighbors helping each other stay connected,” said Madeline Franklin, executive director of STL Village.

“Providing safe transportation to medical appointments and grocery deliveries to members’ homes have always been a part of our mission. And since the pandemic, we have moved all of our social activities and educational events online with Zoom.”

Franklin added that volunteers have also been making more friendly calls to check in with members and ‘just chat’ due to the need for staying home and social distancing during Covid-19.

STL Village is a grassroots community organization founded in 2014 and is one of over 250 independent organizations nationwide that are part of the village movement   supporting older adults who desire to age in place. STL Village is a member of the Village to Village Network, a nonprofit organization providing guidance to villages worldwide.

For more information on Village Aglow or our member services, contact STL Village at 314-240-5020 or visit stlvillage.org.

A visit to the St. Louis College of Pharmacy 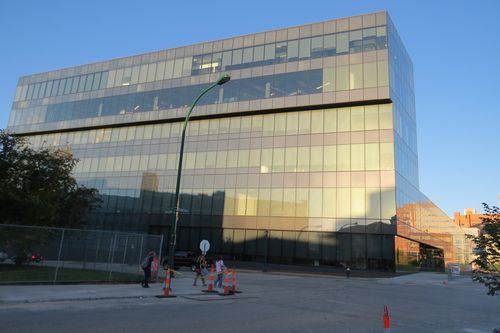 St. Louis College of Pharmacy was established in 1864 as the Civil War was winding down. The first botany class was held at Shaw's Garden (Missouri Botanical Garden), and after moving to six different locations, in 1927 the college opened at Parkview Place and Euclid Avenue in what was then an emerging medical center.

Last month, more than 150 years after its founding, St. Louis College of Pharmacy opened a brand new 6-story 213,000 s.f. building at Taylor Avenue and Parkview Place. Whereas earlier phases in the evolution of the St. Louis College of Pharmacy campus were internally focused around a courtyard, it was the mission of current President John A. Pieper to orient the building outward and embrace the healthcare community that surrounds it.

Following that directive CWEnder George Nikolajevich and his team at Cannon Design designed a building with a gleaming glass facade that embraces the neighborhood with gusto, see above. 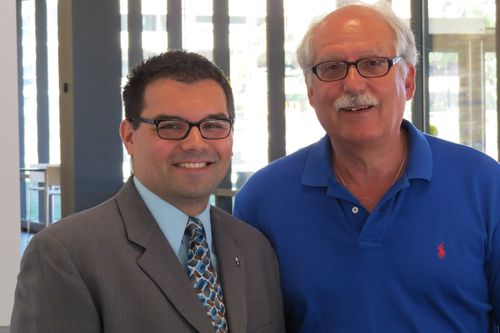 CWE Urban Farmer and STL Village co-founder Arthur Culbert, right, has been a St. Louis College of Pharmacy board member for the past 4 years and was responsible for arranging my tour of the new facility. Michael A. Sass, Special Assistant to President Pieper, left, led the tour as workmen were hurriedly putting finishing touches on the building just hours away from the first day of class. 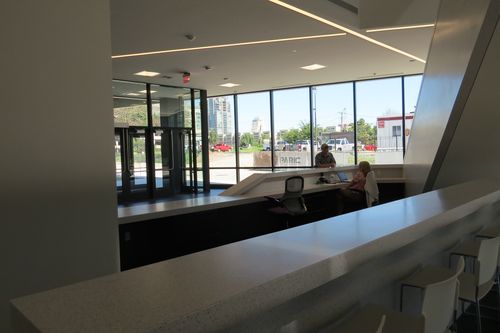 An airy reception area is located on the north side of the building. A new welcome center for prospective students and their families, forum and gathering spaces, and administrative offices occupy the 1st and 2nd floors. 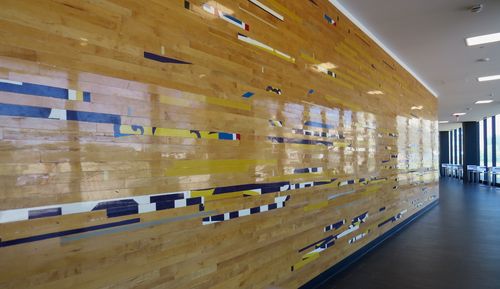 Wood salvaged from the old gymnasium floor was repurposed as abstract art evidenced in a handsome wall, above. Repurposing materials is a necessary part of qualifying for LEED certification for the project. 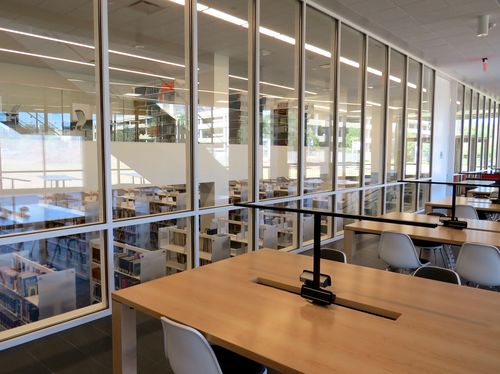 The 2-story 33,000 s.f. library is triple the size of the original. The stacks, left, keep STLCOP's valuable collection of books secure while still being accessible to students.The library also contains study carrels which create intimate research areas, and 10 state-of-the-art study rooms that can be used for small lectures or study groups. 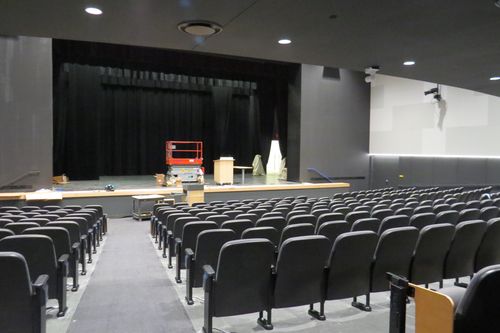 A beautiful 400-seat auditorium will be used for theater performances, convocations, examinations, and large classes. 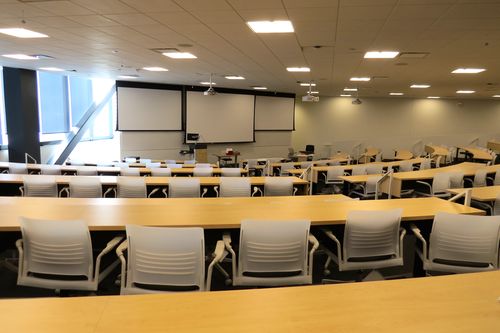 The classroom shown above is one of two that accommodate 250 students. The lecture hall is arranged so professors can move freely between the wide rows and students can configure their chairs for team-based learning activities. Each desk has connection points so students can hook computers to the 3 screens shown in front. 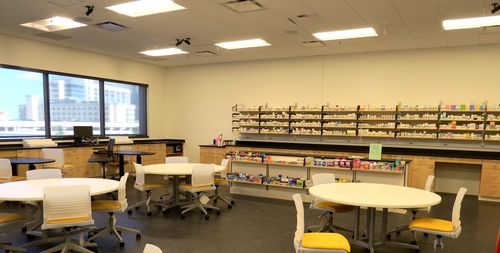 The new building contains 16,500 s.f. of research labs for students and faculty. A clinical skills lab, above, gives students exposure working in a real-community pharmacy. Here they also learn how to counsel patients. A camera records how students interact with "patients" so professors can offer feedback. 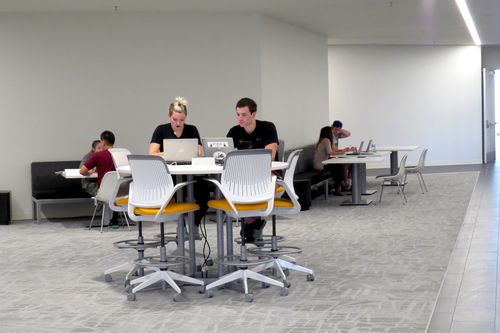 Students are shown above in one of many informal study areas located throughout the building.

St. Louis College of Pharmacy is the 3rd oldest continually operating college of its type in the country and the oldest west of the Mississippi River. It also has one of the lowest tuitions out of 65 private colleges of pharmacy in the U.S. 45% of the 1389 student body comes from Missouri; the rest come from 31 other states, and 10 countries. 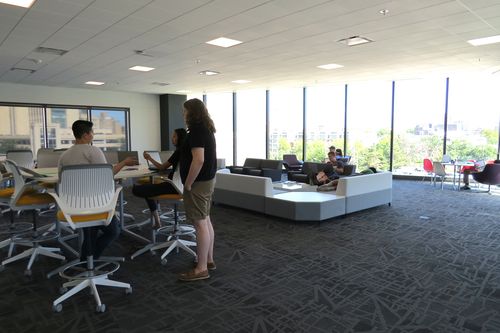 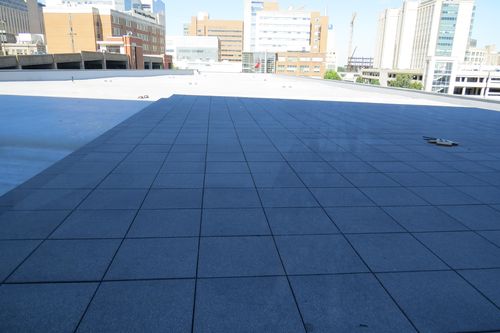 Landscaping around an enormous outdoor patio space on the 3rd floor, with beautiful views of the surrounding biomedical complex and north to the CWE skyline, will be completed later this fall. 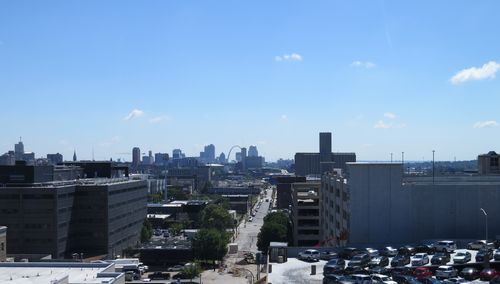 This is the spectacular view from the 6th floor which houses research labs for more than 140 faculty to research new pharmaceuticals, and where the brand-new Center for Clinical Pharmacology, established in collaboration with W. U. School of Medicine's Department of Anesthesiology, will be located. This project will be the School of Medicine's first shared research center with another higher education institution. The Center will recruit 5 world-class scientists from STLCOP faculty or STLCOP/WU will collaborate on appointments. 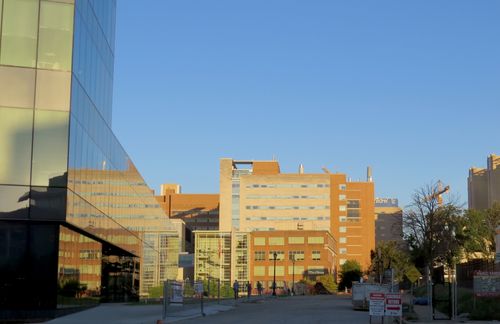 The new building is not the final chapter for St. Louis College of Pharmacy. Phase II of the building program is a 7-story 193,000 s.f. facility located just north of the new building, above and to the right. (A better view of the site can be seen through the windows in the photograph of the reception area at beginning of post.) The new facility will be student-focused with a dining hall, kitchen, and gymnasium on the first floor, a 3-lane indoor track on the 3rd floor, and residences on the top three floors. Construction will begin later this year, with completion slated for December, 2016.

For more information about St. Louis College of Pharmacy, contact Brad Brown, director of public relations at (314) 691-3130 or brad.brown@stlcop.edu.

Of note: Dr. John Pieper and his wife Patty are members of STL Village, as are architect George Nikolajevich and his wife Sally, who is co-chair of the organization. A fundraiser for STL Village is planned at St. Louis College of Pharmacy on Thursday, October 15 from 5 to 8 p.m. Tours of the building will be available as well as plenty of food and drinks. Tickets for Village Aglow are $75 for STL Village members, $100 for non-members, and can be purchased here. 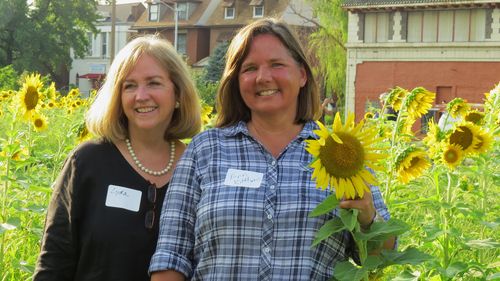 28th Ward Alderman Lyda Krewson, left, is shown with CWEnder Ann Kittlaus at Sunday's get-together at the Delmar Sunflower + Project in the 51xx block of Delmar. This is the second year Lyda has rallied the troops to turn what had been neglected plots of ground into fields of gold.

About thirty people – most of whom had volunteered to help plant 15,000 sunflower seeds at the end of May – stopped by to enjoy the fruits of their labor, and cut a few sunflowers to take home. 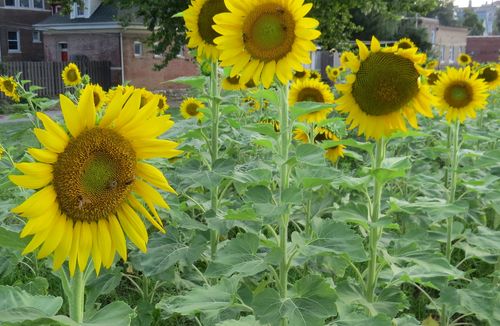 After the sunflower seeds sprouted in June, volunteers returned to thin the seedlings to approximately 10,000 plants. When you stop by, and you should, you'll be enthralled by how a simple sunflower planted en masse, can transform a neglected site into an oasis of beauty and tranquility. 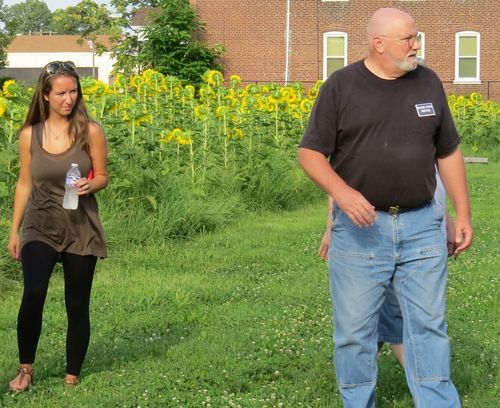 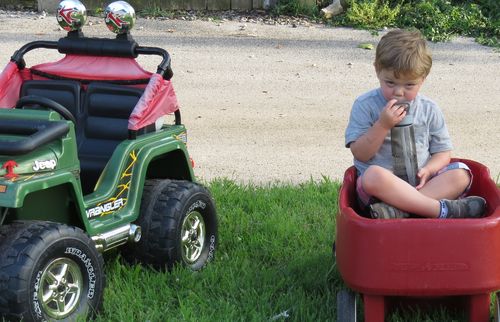 One young guest brought two vehicles across the alley from Washington Place, above. 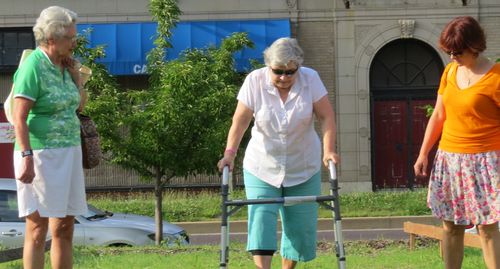 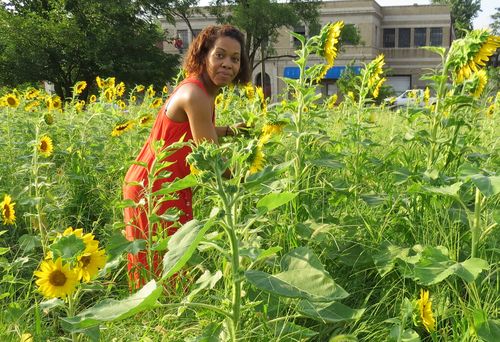 28th Ward Committeewoman Gail Farwell (not pictured) was there with her niece, Cari, shown above. 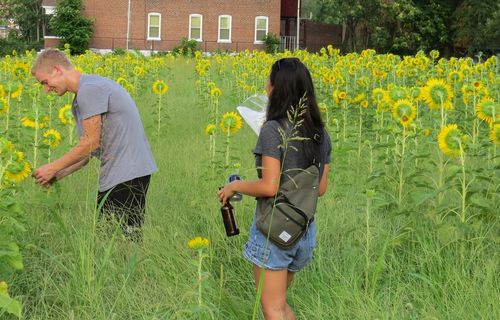 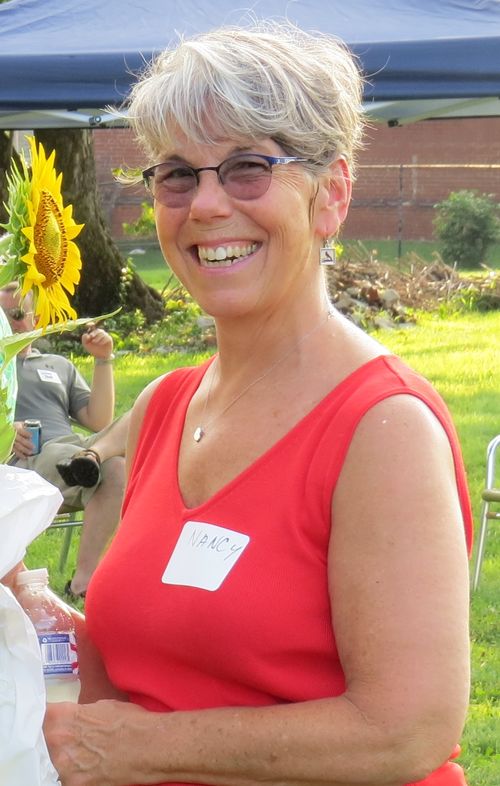 CWEnder Nancy Culbert is pictured above. 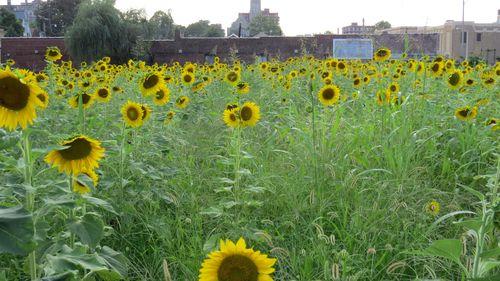 When Lyda sent out the email invitation to Sunday's gathering, she asked for donations for the project. Almost immediately, she raised an additional $1,100 for expenses related to the maintenance of the garden, including site preparation, planting, and lawn cutting. If you'd like to help, here is the link.

Thanks to Lyda Krewson and her team of advisors for providing an opportunity for volunteers and donors to make a difference on a street that has been the subject of controversy over the years. The Third Degree Glass Factory more than started the ball rolling, and now, something as simple as planting sunflowers demonstrate that with leadership and a good cause, the neighborhood is more than willing to pitch in.