A visit to Cortex’s AB Mauri, where they’re passionate about baking 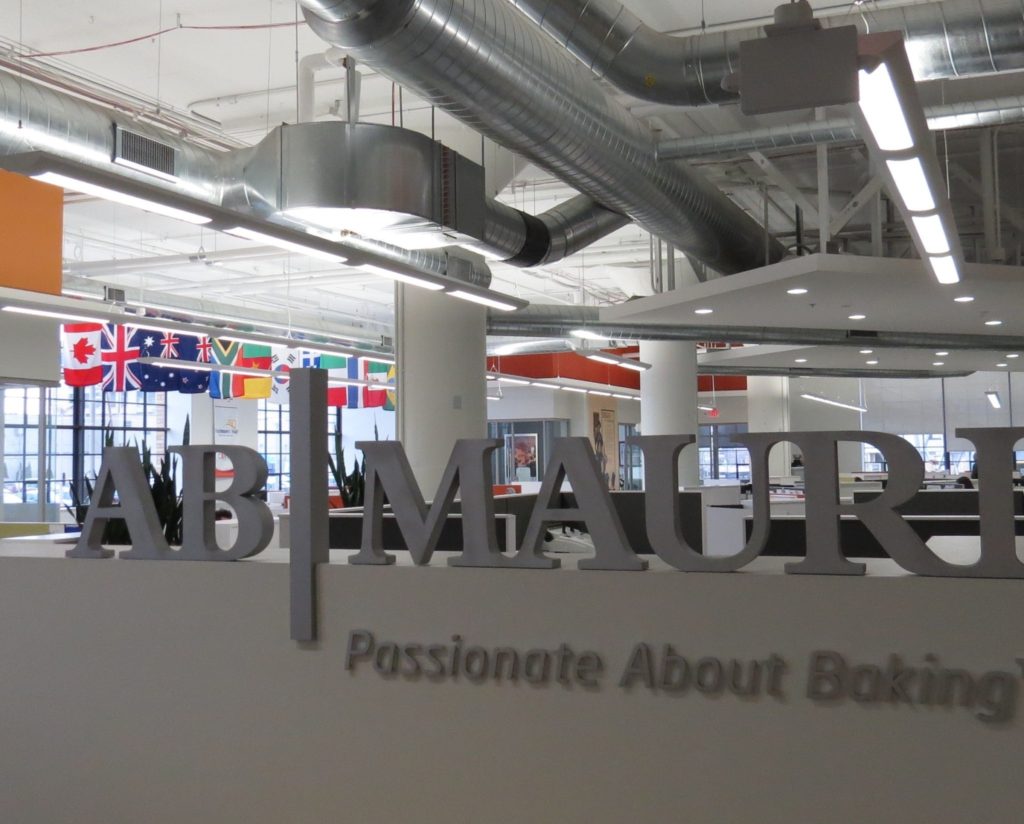 After CWEnder Meredith Ramm won tickets to a Savor Saint Louis Food Tour offered on this blog, I noticed on her winning email that she works for AB Mauri, located in the @4240 building in the Cortex Innovation Community. As many times as I’ve been to that building I had never noticed the company’s entry, which is located on the first floor. What really caught my eye in her response was the company’s tagline, “Passionate about Baking,” because I too am passionate about baking.

More than curious about what the company does and why a business that’s associated with baking would be located at Cortex, I set up a meeting with AB Mauri’s Vice President of Marketing Rick Oleshak, to learn more. The first thing Oleshak asked, when I mentioned that I loved to bake bread, was what brand of yeast I used. Luckily my response, Fleischmann’s, was the correct answer as that brand is AB Mauri’s largest consumer product. I also learned that 2018 is a banner year for the company, as Fleischmann’s Yeast is celebrating its 150th anniversary.

AB Mauri moved from West County to Cortex a little over 3 years ago after Australian Mark Prendergast became president. Prendergast, a biking enthusiast, lived at The Chase Park Plaza for a while and would bike around the Central West End after work. When he discovered Cortex, he decided to move AB Mauri’s North American headquarters to a 23,000 s.f. space (which includes 8,000 s.f. of lab space called the bakingHUB) at @4240, Duncan and Boyle. 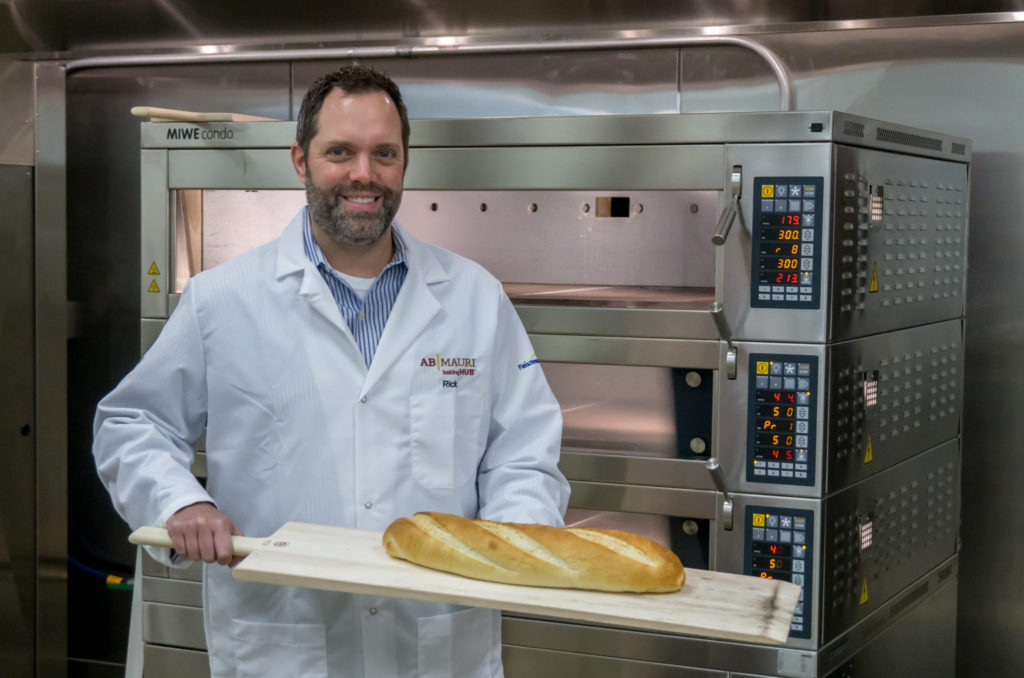 Rick Oleshak, photographed in the bakingHUB above, said the change in location has also changed the attitude of the company’s 80 employees. The West County location didn’t have the personality Cortex has, and employees now enjoy interaction with other tech company innovators @4240.

AB Mauri is a baking technology company that delivers service, yeast and bakery ingredient solutions to large industrialized bakeries, local grocery chains and many restaurants as well.  The company also has artisanal partners around the country including several in the St. Louis  area. 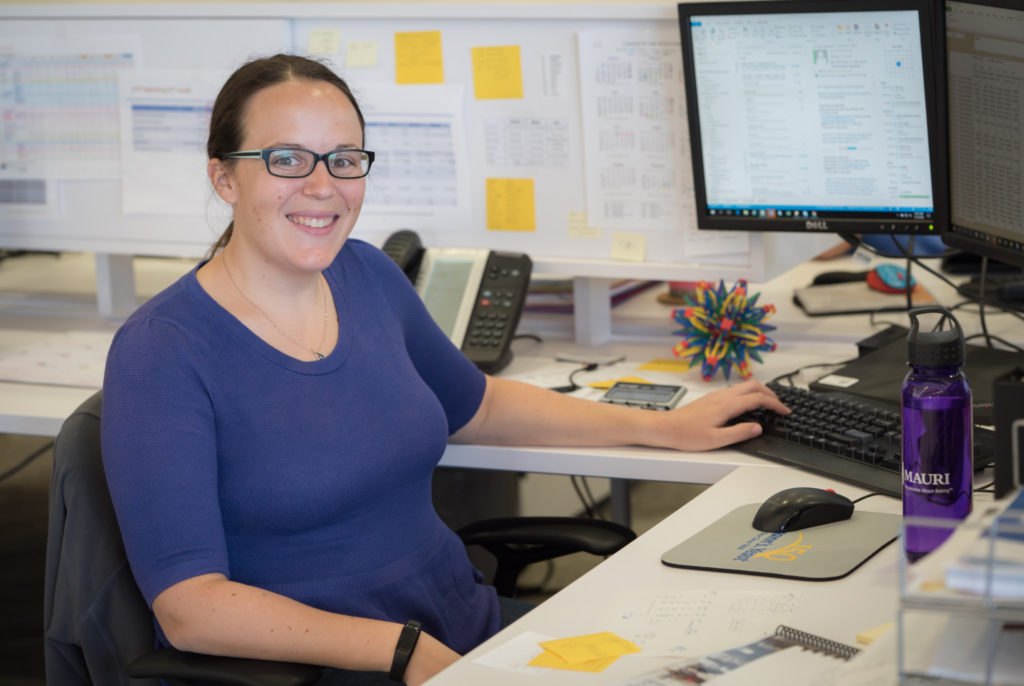 CWEnder Meredith Ramm, above, became AB Mauri’s Financial Planning & Analysis Manager in March of 2017. “I own forecasting, budgeting, etc. on the financial side,” she said.  “My husband and I love living in the Central West End and I couldn’t imagine turning down a job offer in the neighborhood too.” Ramm added that the work environment is fabulous. It’s easy to appreciate, once you step inside the handsome space, why AB Mauri was named one of the coolest working spaces by the St. Louis Business Journal and one of the top workplaces in a 2017 St. Louis Post-Dispatch poll. 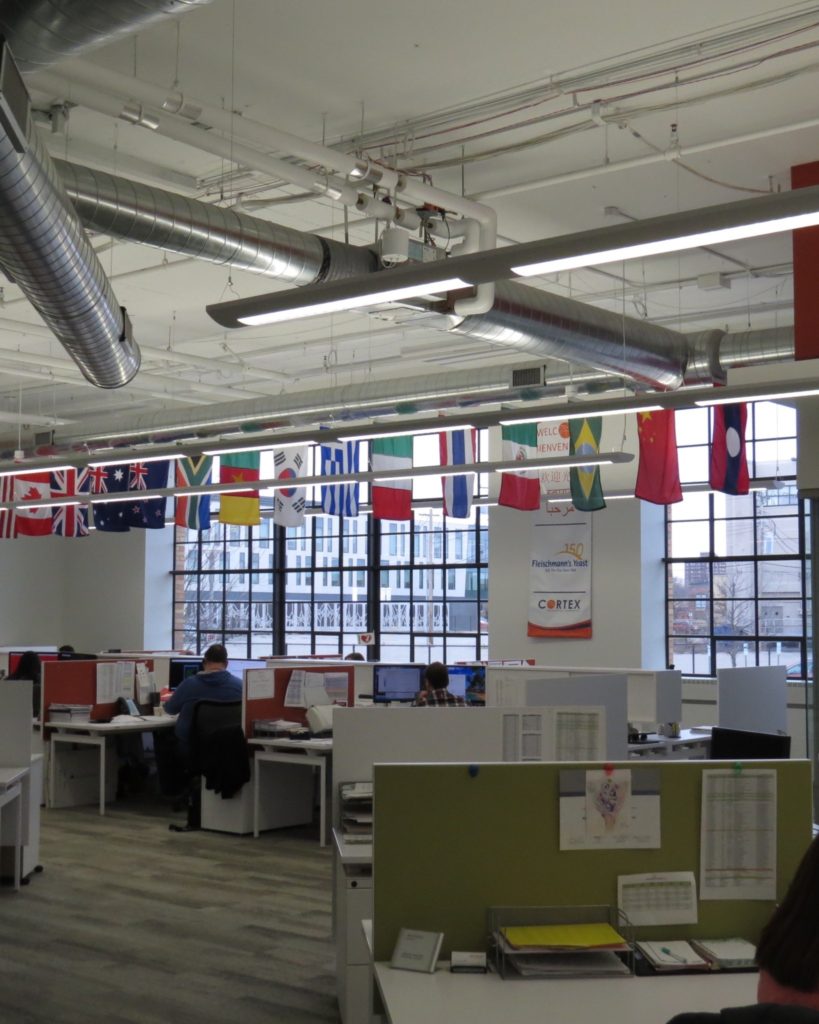 A row of flags along a north wall represents 15 countries of origin for the 80 employees at AB Mauri North America. 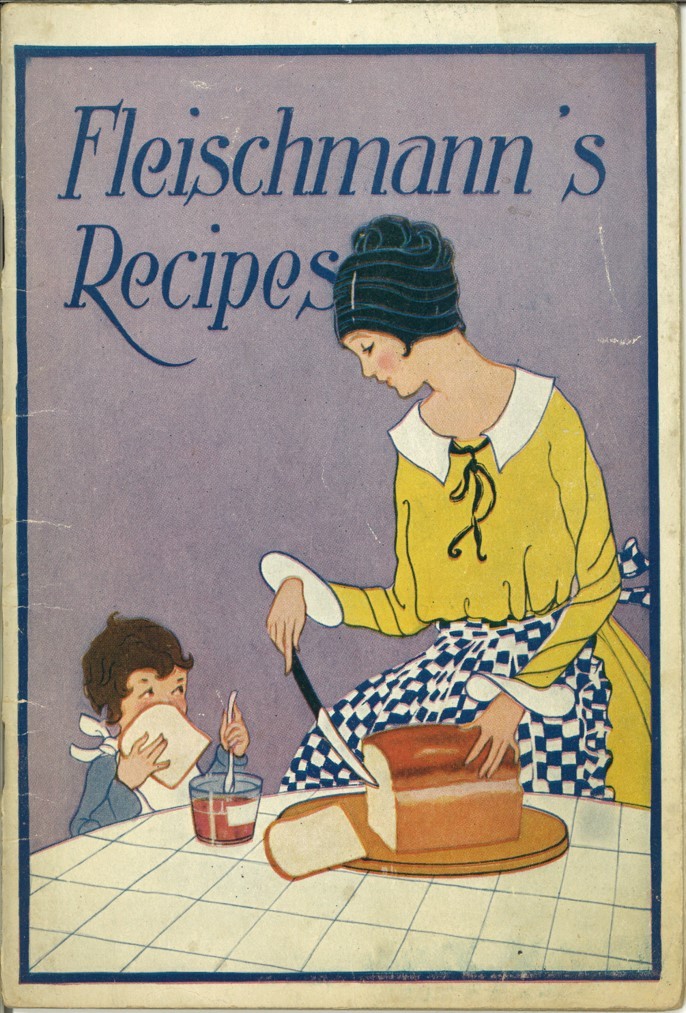 Fleischmann’s Yeast was founded in 1868 by two brothers in Cincinnati, and quickly became a staple in American pantries. Note the charming cover of a 1917 cookbook above, which hangs on a wall in the company’s dining area. When Fleischmann’s was acquired by Associated British Foods (ABF) in 2004, AB Mauri was formed as an operating division. From the website: “Around the world, AB Mauri operates in more than 50 locations in 32 countries (and employs 7,000 people) with global headquarters located in Peterborough, United Kingdom.”

With 1700+ strains of yeast in its fermentation lab, AB Mauri North America makes yeast for the production of many products including bread, beer, wine, spirits and nutrition. The company recently expanded its yeast production to include biofuel. 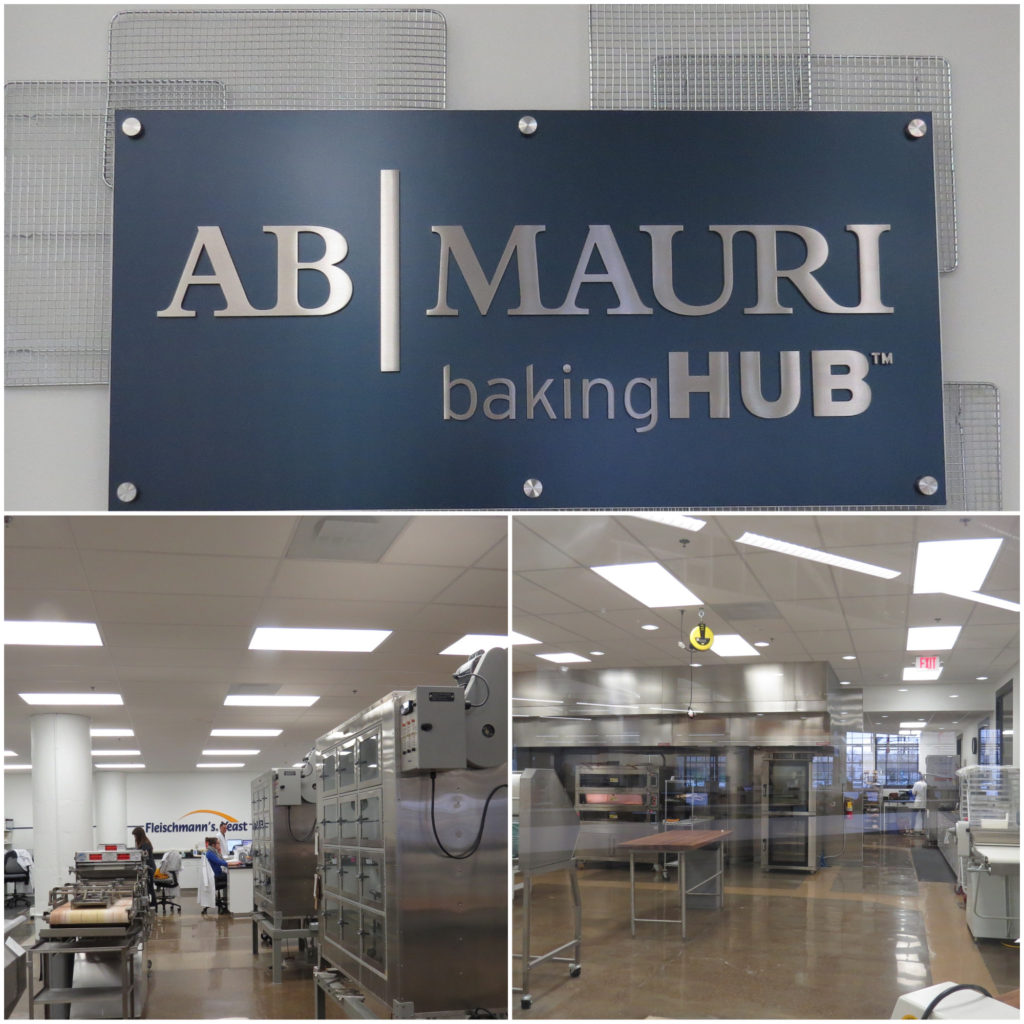 The 8,000 s.f. bakingHUB is the largest lab in the area. Technicians have 500 ingredients available in the AB Mauri system to assist clients in creating a unique bakery mix so their product will stand out from the competition. 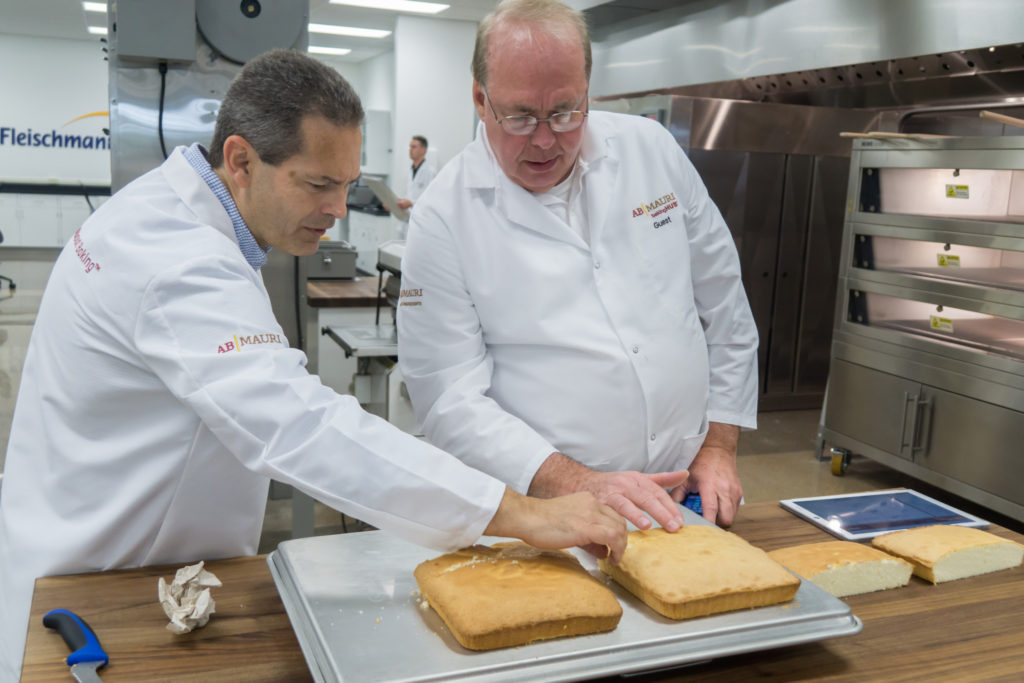 The bakingHUB is also used to help bakeries find solutions to problems. Technicians at AB Mauri can program the HUB’s equipment to mimic conditions at a bakery’s factory and figure out what’s wrong. It could be as simple as a conveyor belt being out of whack. 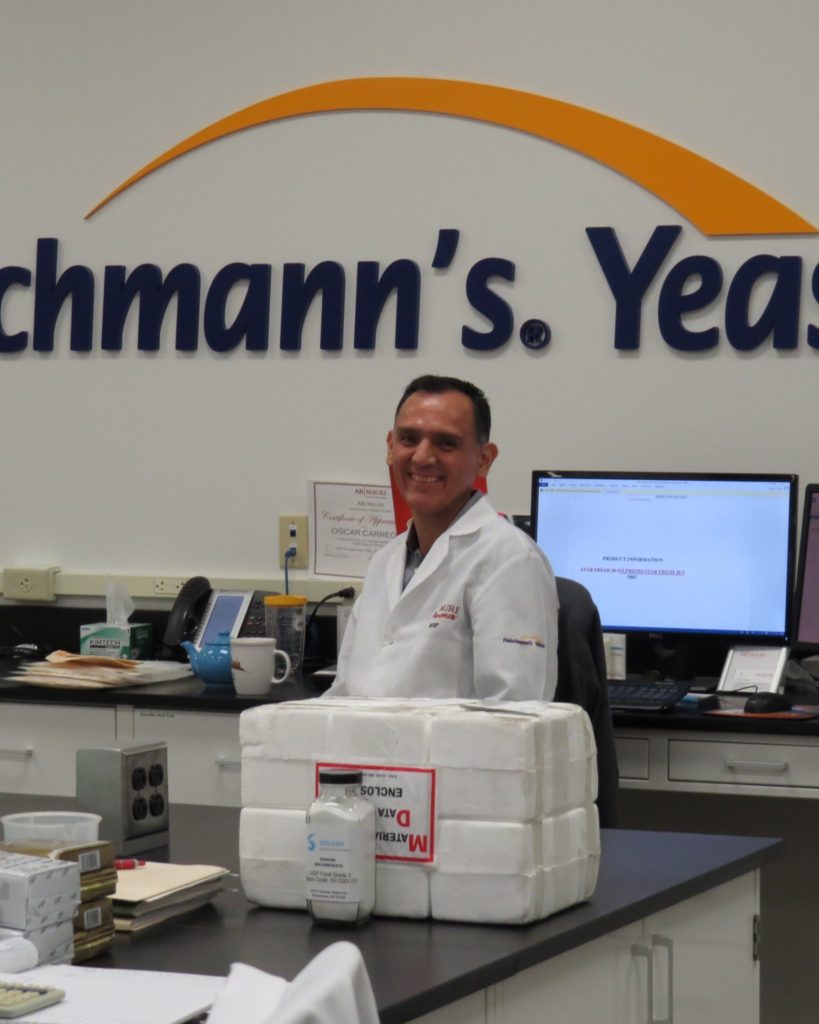 Americans’ tastes have broadened with exposure to foods from different cultures. With that in mind, meet Oscar Carreon, above, technical service manager for AB Mauri North America. Carreon moved to St. Louis from AB Mauri Mexico to work expressly on the tortilla segment for North America.  In Rick Oleshak’s opinion, “Carreon is outstanding and is regarded as one of the top technical bakers for tortillas in the industry.” 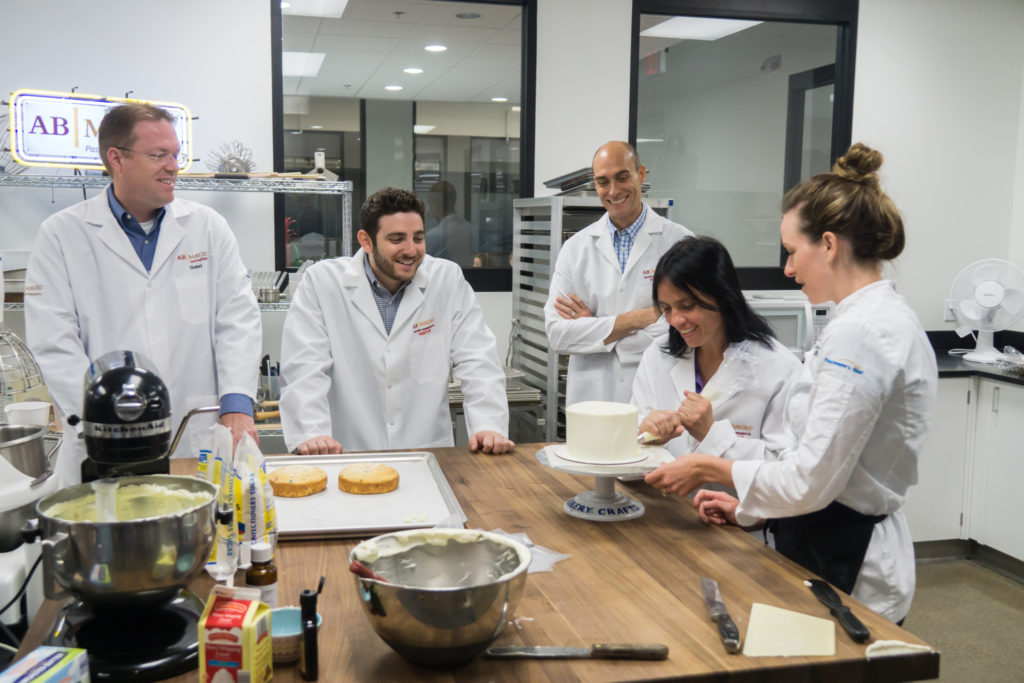 The photo above shows another example of the variety of activity going on in the bakingHUB.  AB Mauri technicians are shown practicing cake decorating skills led by Lia Weber Holter, far right, who uses the facility for her wedding cake business, Made. by Lia (found on The Knot). Lia, who travels to trade shows as an AB Mauri representative, was the winner of TLC’s Next Great Baker.

Thank you to Rick Oleshak for the wonderful visit—and for his patient responses as I tried to make sense of my copious notes—and to Meredith Ramm for acting as the catalyst for letting us explore a company I never expected was headquartered in the neighborhood.  It all started with a Savor Saint Louis Food Tour.

Eavesdropping while on a food tour 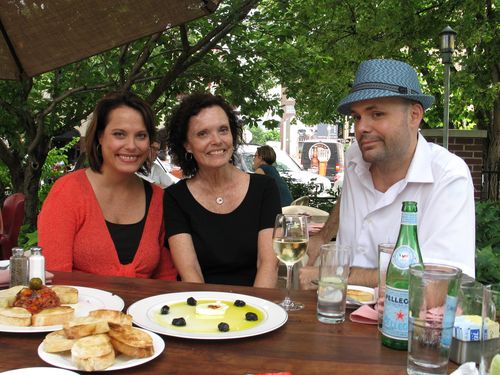 Though I traverse the neighborhood several times each day, it's like anyone or anything you see regularly, you begin to take it all for granted. When mother/daughter entrepreneurs Susie Smith and Jennifer Smith Schmid, (shown with consultant Steve Smith), founders of Savor Saint Louis Food Tours, invited me to tag along on the tour I had publicized on these pages (read post here), I dragged my feet a bit, wondering if I had the time to visit restaurants I've frequented in a neighborhood I know so well. I thought better however, and was totally surprised by the experience. First of all, it was a forced vacation—if only for a few hours. But what pleased me the most was seeing the neighborhood through the eyes of tourists who had never been in the CWE before.

There were seven participants and four tour guides (Jennifer, Susie, and two "in training," CWEnder Anna Cardot and Margaret Kelly, formerly of Duff's). Five of the out-of-towners were in St. Louis for a weekend of Cardinal games, and while searching online for daytime activities found Savor Saint Louis. A couple from Fort Smith, Arkansas (pictured several photographs below), had been on many culinary tours in other parts of the country and in Europe; the trio from Tulsa had also been on several tours in different cities as well—it's more fun than a tour bus, they said.

Savor Saint Louis is a walking tour that includes visits to five CWE restaurants. The tour on Saturdays (Fridays are an option) begins at 11 a.m., lasts approximately 2 1/2 hours, costs $44 and includes all gratuities (drinks are extra). The experience is not all about the food however. Jennifer & Susie have done extensive research on what makes a tour fun and have included lots of information about the neighborhood's architecture, its history, and stories about some of the interesting people who have lived here.

Our first stop was Dressel's Public House where we were served slider-size portions of the restaurant's popular Porchetta Louie (not pictured). Lines form out the door each time the Food Network rebroadcasts the Diners, Drive-Ins, and Dives segment that put Dressel's porchetta on the map. Our group raved about how good it was too! 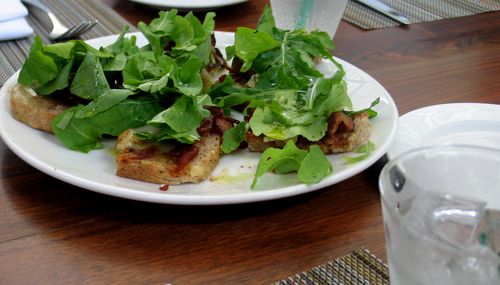 The tour group spends about 20 minutes in each restaurant before heading to the next stop. From Dressel's we walked down Westminster Place to Cafe Osage at Bowood Farms. The tourists were stunned by the vegetable gardens, beautiful nursery, and gift shop in the heart of the city.  At Cafe Osage we enjoyed bite-sized portions of the restaurant's popular Brie L.T., photo above. We were also served a refreshing thyme-infused sparkling water. 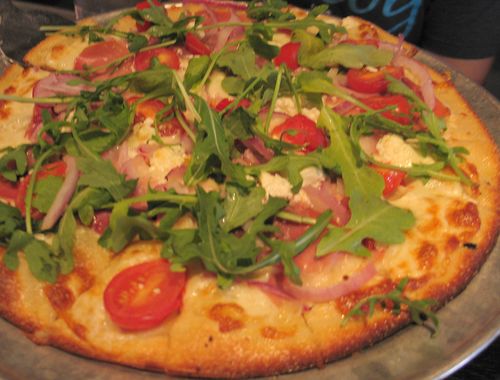 At Pi we sampled slices of both a deep-dish and the CWE pizza with prosciutto, arugula, and goat cheese above. The guides shared stories of how CWEnder Chris Sommers and his partner Frank Ubile started the business, and how it has expanded from Pi's first location in UCity, to Washington D.C. The guest from Chicago wondered about opening there! Obviously, the pizza was a real hit!

As we meandered along Euclid to Maryland we peered into the private streets. They too are an example of what is so special and unexpected about this neighborhood. The visitors were stunned by the size of the houses–"are they really single family?"—and how beautifully maintained they are. As we headed for a visit to the storied Chase Hotel the guides pointed out the many shops, Chess Club, each restaurant and more.

Normally, if the Chase isn't booked for a wedding or other event, the fourth tasting occurs there. However it was booked that day, so we headed to Bar Italia and sat at a long table on the patio for a dish of the restaurant's signature tortellini. That was delightful too. 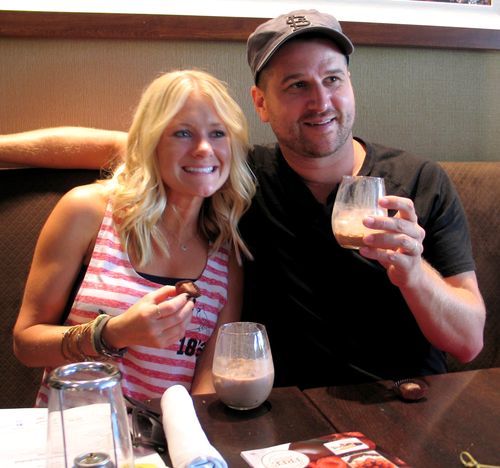 At this point in the tour the group was so pleased with the experience and so complimentary about the neighborhood that the final stop in Bissinger's was the icing on the cake, so to speak. We were served a delicious iced chocolate topped with a homemade marshmallow, a summertime version of the confectioner's popular hot chocolate. The drink is not on the menu, but is offered only for the Savor Saint Louis Food Tour. Samples of Bissinger's caramels and dark chocolates were also passed around by manager Tambora Mills, below. 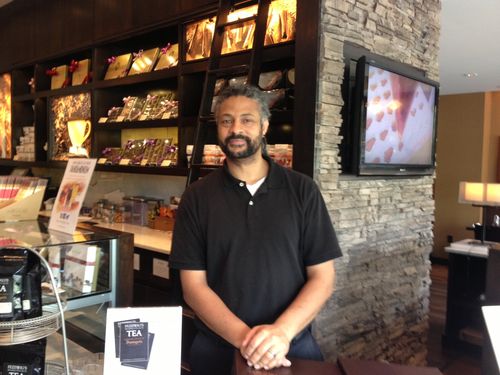 Tambora, who is quite the affable ambassador for the company, entertained the group with stories of the Bissinger family history and the copper pot that was used to make caramel for Napoleon that is still in use to this day.

There is so much more to be said about the tour that I think you should just experience it yourself—or give it as a gift. You too will be appreciating the neighborhood in a new way. Jennifer and Susie have generously donated a Gift Certificate to offer to the first person to email me (address at top of page, left) with a favorite dish in a CWE restaurant, and why you love it. I'll post the winner here.

The winner is: CWEnder Josie Poulton emailed that she loves the fish tacos at Tortillaria because they are light and refreshing but still fill you up…especially if you add a margarita! Thanks for your entry Josie and enjoy the tour!