Two weeks ago organizers of BookFest STL— Left Bank Books, Left Bank Books Foundation and the CWE North Community Improvement District —brought a stellar roster of authors to town for this year’s event, the second in what is sure to become a CWE tradition. Some were familiar names from best seller lists or recent reviews in national publications, and one, actress and now author Sally Field, has such name recognition that all 200 VIP tickets to her Friday night talk sold out quickly. 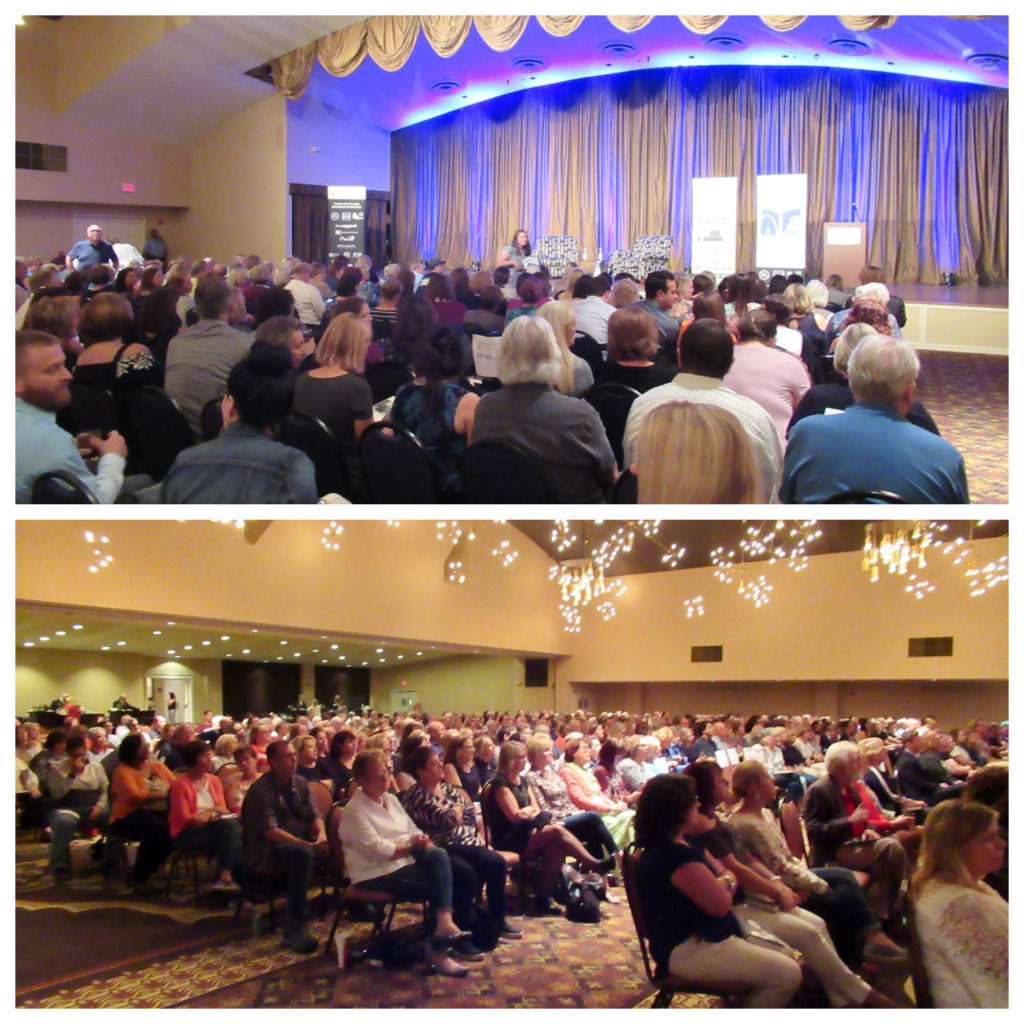 Sally Field chose BookFest STL as the 2nd stop on her tour for her just published memoir In Pieces. The event drew approximately 800 people to The Chase Hotel’s Khorassan Room Friday evening. 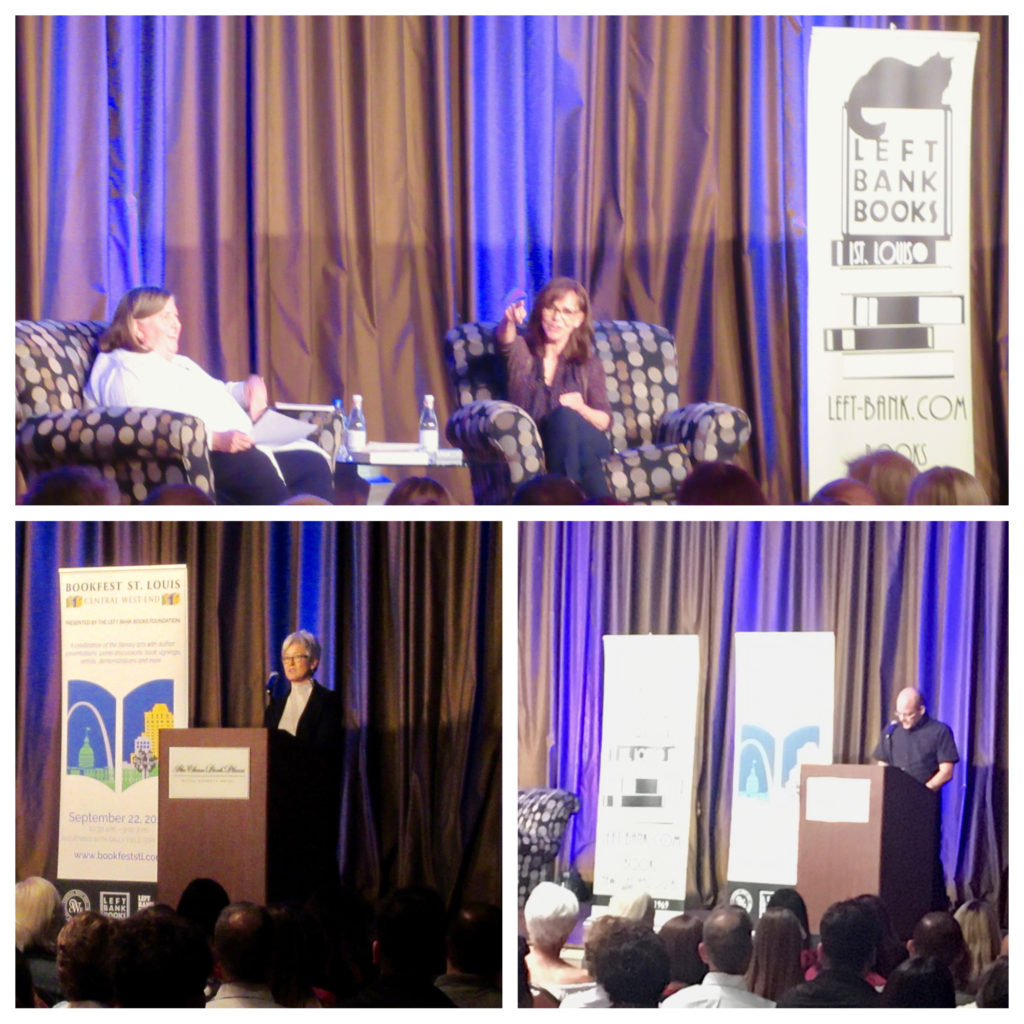 The energy was palpable as people found their seats  (VIP ticket holders were front and center) for “A conversation with Sally Field” led by local author Kathleen Finneran. When the actress read from her memoir she connected with the audience so intimately, it was as if she was speaking to each one of us individually. Finneran also relayed questions submitted in advance from the audience. 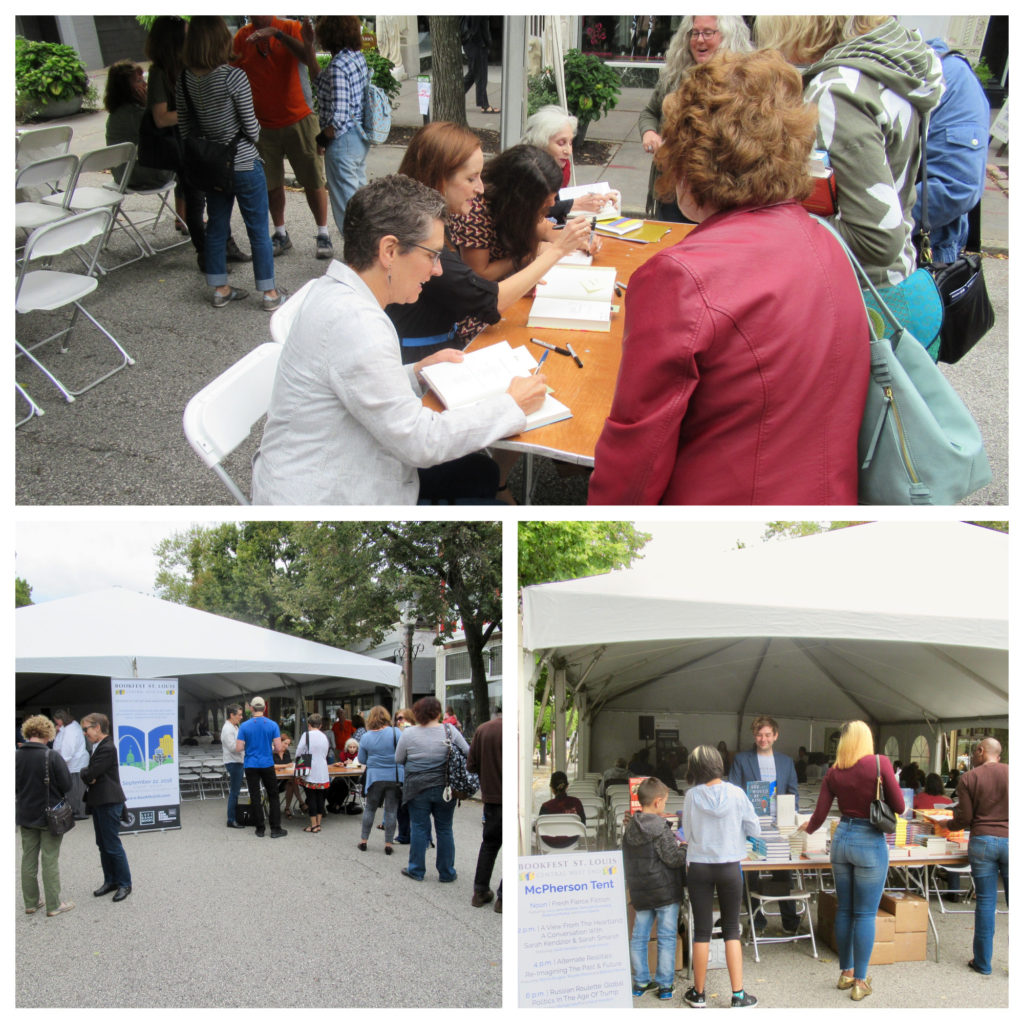 Several CWE venues were used for author events, including Schlafly Library for children’s, middle-grade and YA authors. Bar Italia hosted a sold-out Wit & Wine with Gary Shteyngart event. And 510 N. Euclid was the site for Memorists with Mettle and Suspense in the City panels. A large tent on McPherson, above, and Dressel’s Pub were also sites for author appearances. 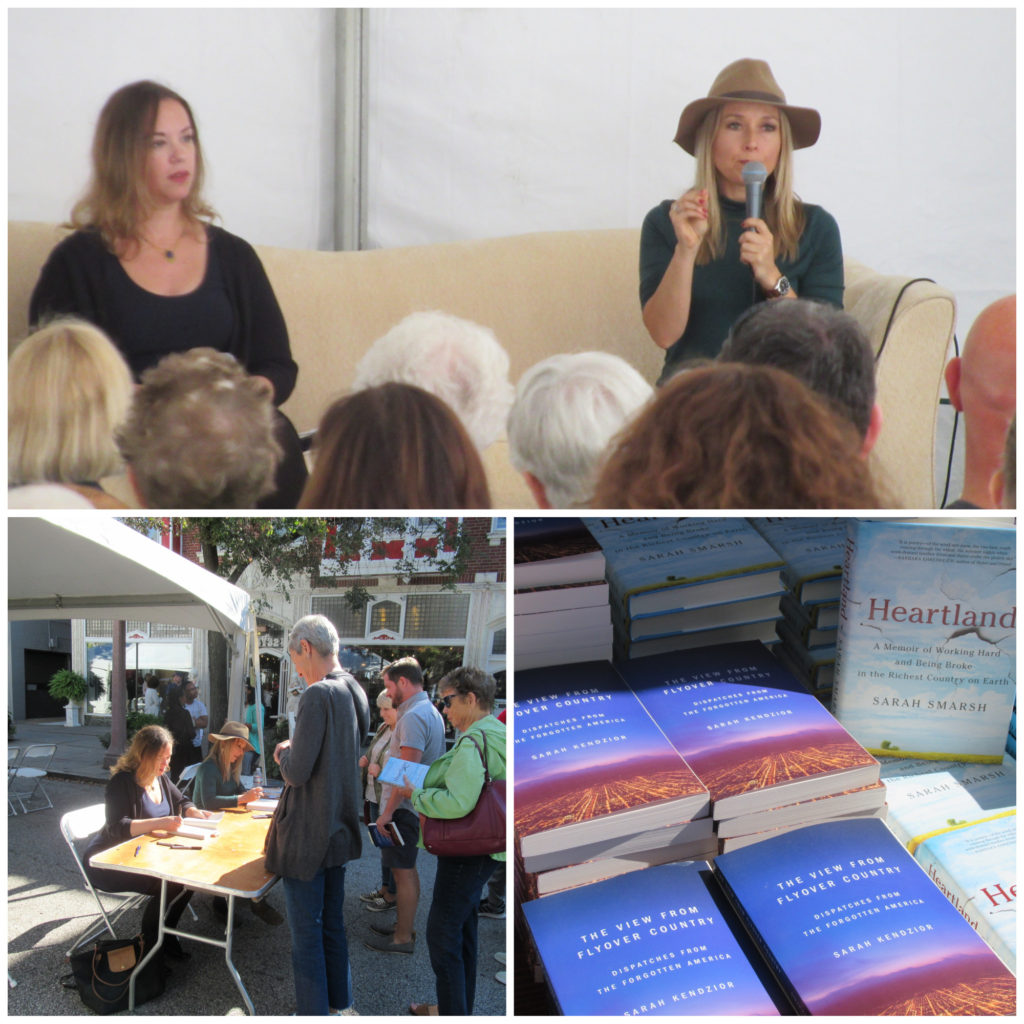 A View from the Heartland, a conversation between best-selling authors Sarah Kendzior and Sarah Smarsh, top photo, drew a large crowd to the McPherson Tent. 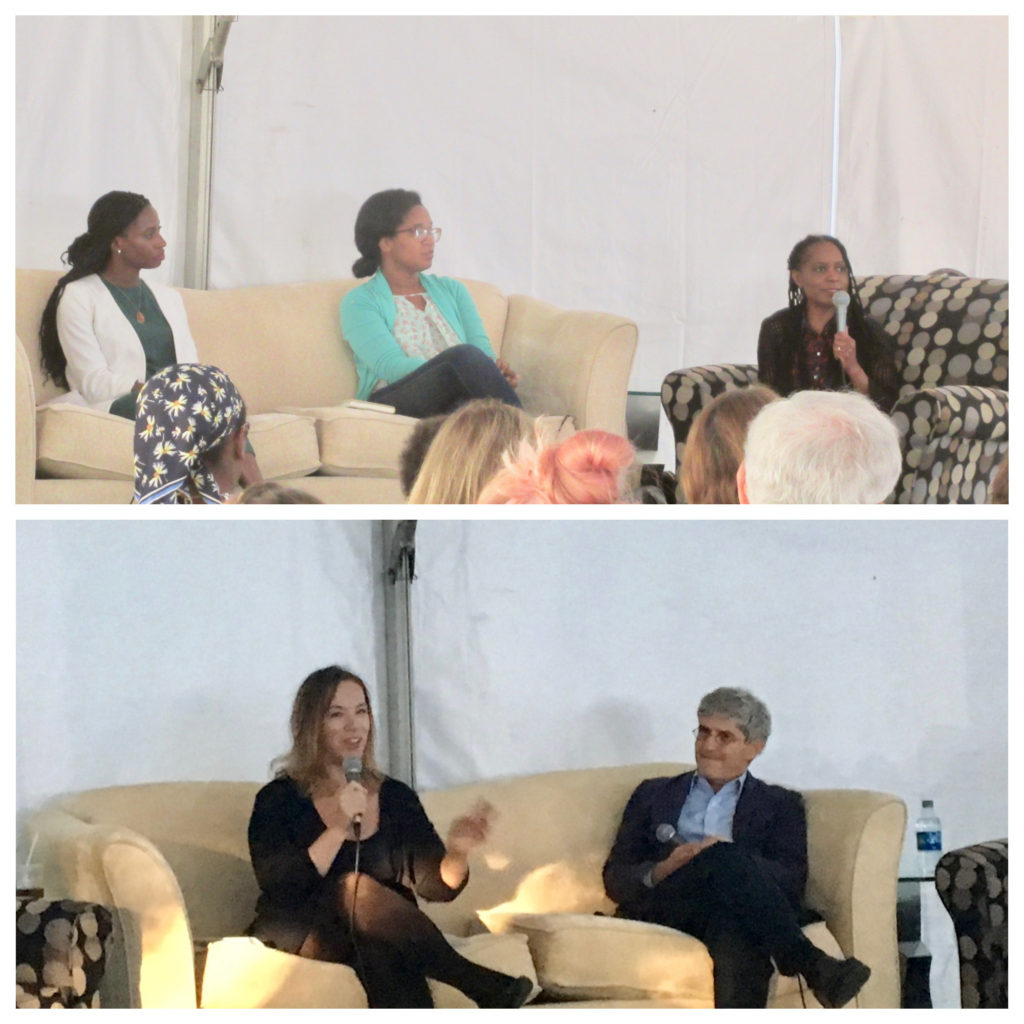 Top photo: Alternate Realities: Re-Imagining the Past and the Future featured author Wayétu Moore, left, whose novel She Would be King was favorably reviewed in the New York Times just after Bookfest ended. She’s photographed with authors Bethany Moore and Marcia Douglas.

Bottom photo: Author Sarah Kendzior made a second appearance in a conversation with W. U. grad and best-selling author Michael Isikoff, who co-authored Russian Roulette with journalist David Corn. 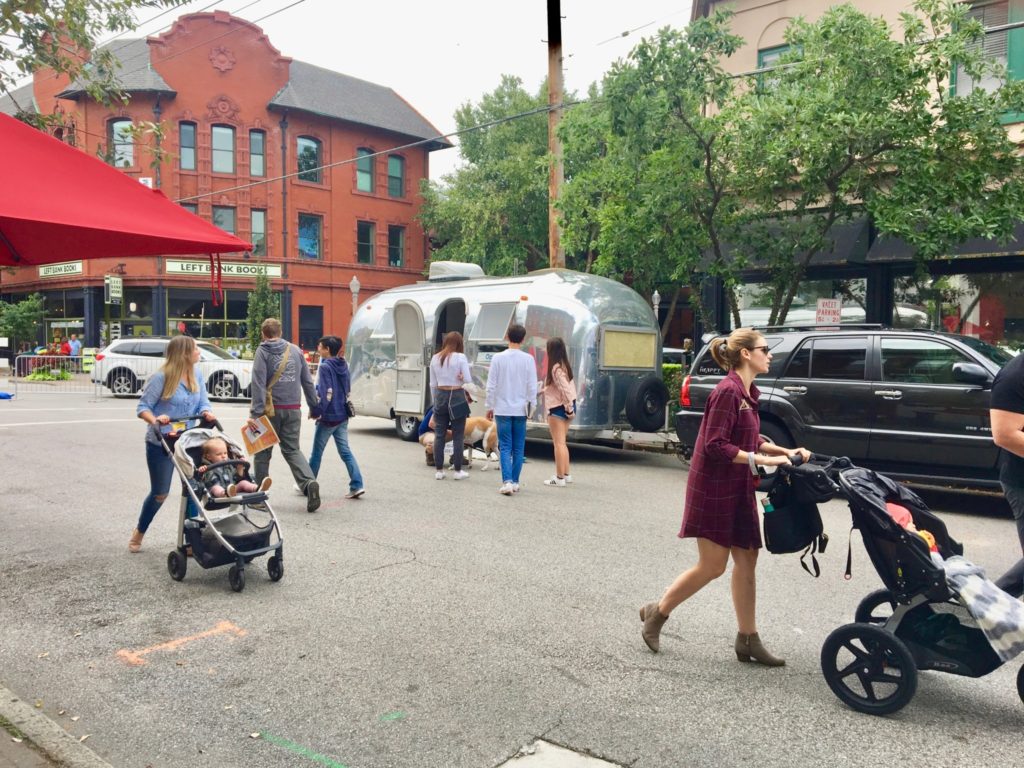 When we ran into 28th Ward Alderman Heather Navarro at the corner of Euclid and McPherson Saturday afternoon she jokingly asked: “What city is this?”  That’s how energetic, engaged, and enthused those who were gathered around author venues or congregated in Left Bank Books appeared to be. 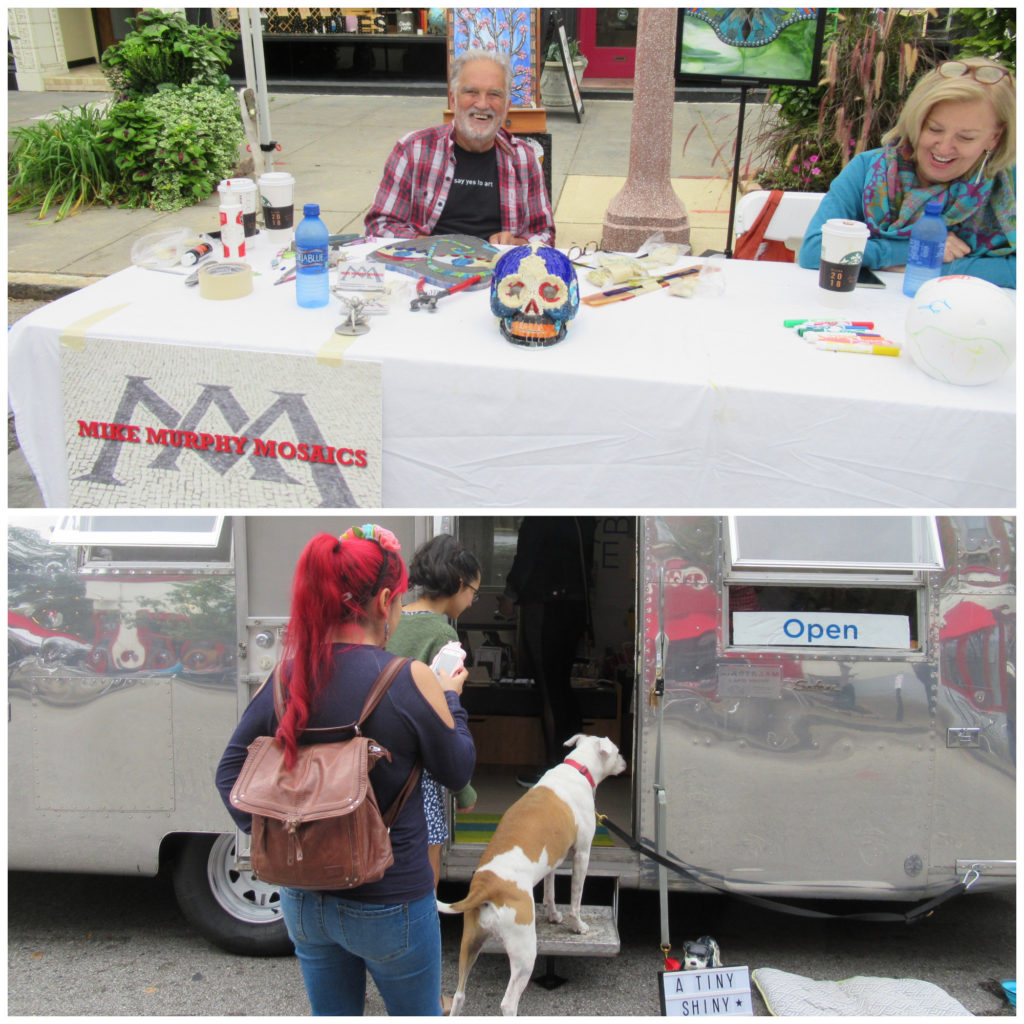 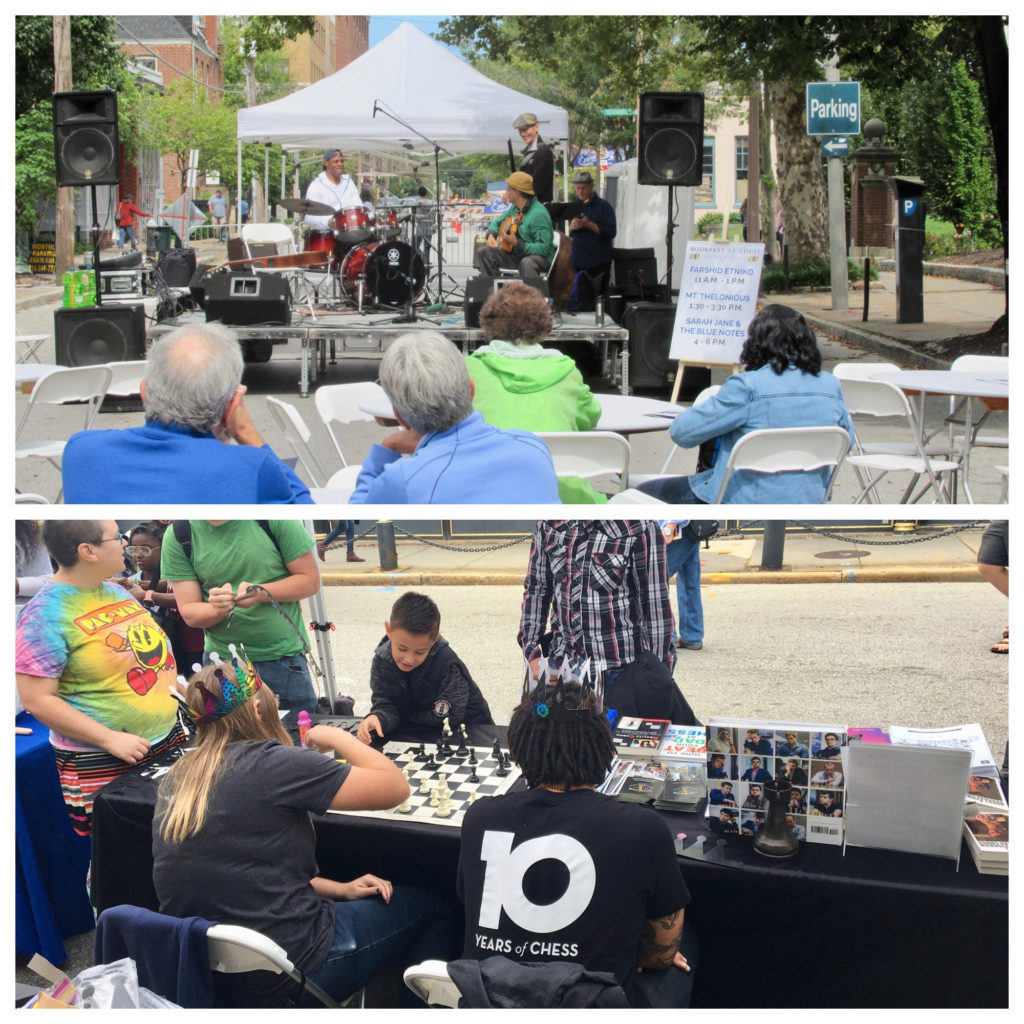 The Festival Zone also included a musical stage where Farshid Soltanshahi and his band, above, were among the performers.

Bottom photo: World Chess Hall of Fame staffers entertained with an ongoing chess game and other activities for children. 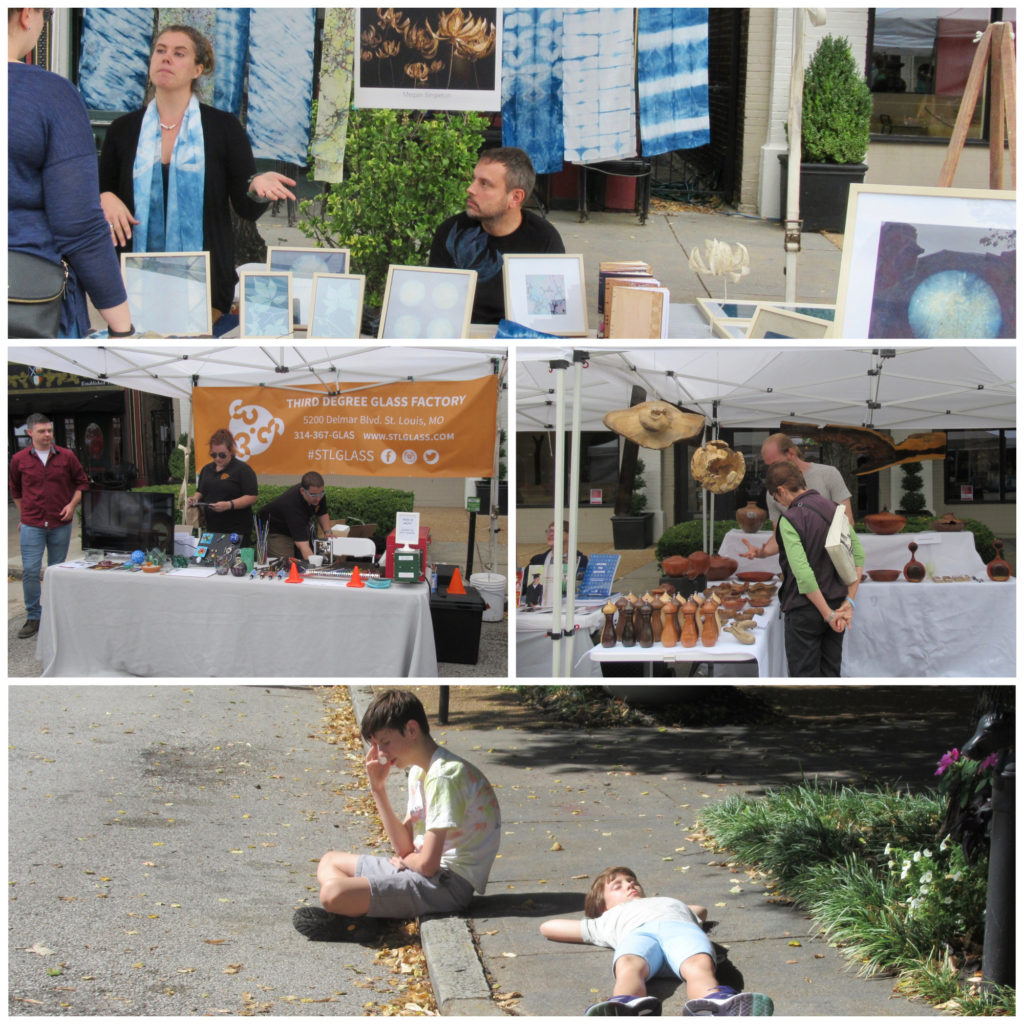 Photos above: A complete list of artists, shops, and organizations that had booths in the Festival Zone can be found here. 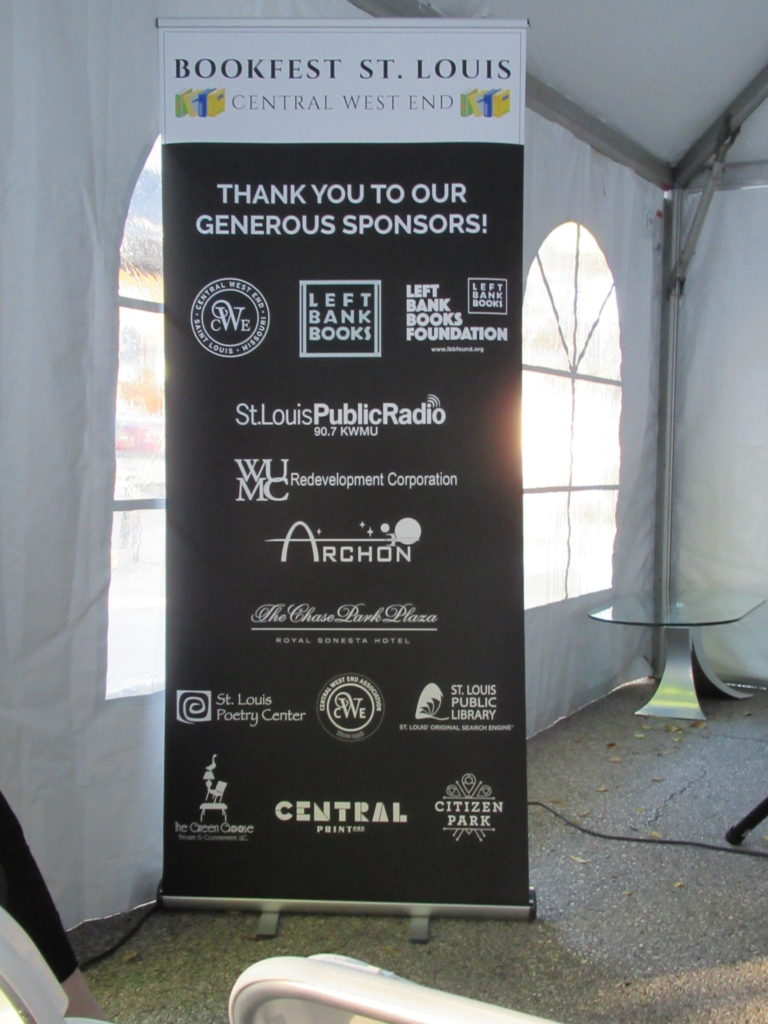 Many thanks to Left Bank Books, Left Bank Books Foundation and the CWE North Community Improvement District, for the months of planning and hard work, and to the many sponsors shown on the banner above whose support helped make the event possible.

The 2nd BookFest STL was so successful that organizers started planning 2019’s event just as They Said: Cross-Genre Collaborations, the final event of the day, concluded at Dressel’s Pub. The word is out now among authors and their agents that St. Louis is not flyover country and BookFest STL should definitely be on their schedules.

Starting at 6 a.m. Saturday, Sept. 22, McPherson Avenue, between Euclid and Walton and Euclid north of McPherson to the parking lot just north of Dressel’s, will be closed to through traffic. Vehicles will be able to access the parking lot on Euclid, by heading south on Euclid from Washington. 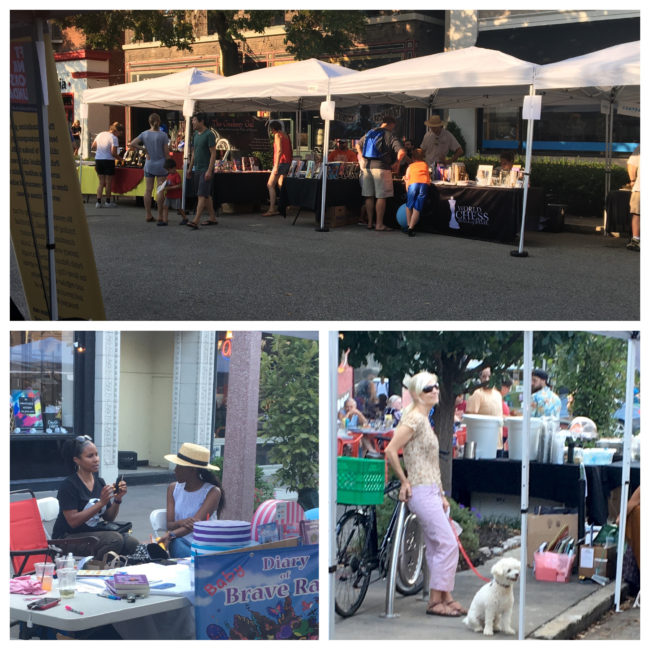 Festival-goers will enjoy music from Farshid Etniko, Mt. Thelonious and Sarah Jane & The Blue Notes while they color Central West End scenes (adult and kid-friendly coloring pages available!), craft poetry on a giant magnetic board and stroll through more than two dozen booths featuring book-themed crafts available for purchase and a variety of family-friendly activities.

If you work up an appetite during BookFest St. Louis, be sure to check out the dine-in and grab-and-go options available at one of the Central West End’s numerous restaurants. Dressel’s Pub, Mission Taco Joint and Pi Pizzeria are all located inside the festival zone, while other great options — full list available here — are all within walking distance.

The BookFest St. Louis festival zone is free and open to the public.

It is a real coup for the Central West End and St. Louis that following the success of the 1st BookFest event last September, word has traveled among the literary community that this is a top-notch festival, and one authors shouldn’t miss. Neither should you.

Thanks to Left Bank Books, the Left Bank Books Foundation and the CWE North Community Improvement District for all the effort and care they have put into 2018’s BookFest STL.

The last authors to appear at 2017’s BookFest St. Louis in the Central West End had just packed their bags and headed for the airport when organizers, thrilled with the success of the inaugural event, started planning for 2018’s BookFest. The organizing team, including staff from Left Bank Books, the Left Bank Books Foundation and the Central West End Community Improvement District,  the event producer, have been hard at work ever since.

Now, in what seems like the mere turning of a page, 2018’s BookFest St. Louis is less than a month away. This year’s line-up features an exciting mix of 40-plus locally and internationally renowned authors highlighting the best of contemporary literary fiction, poetry, memoir, science fiction, young adult fiction, mystery and history.  A variety of events will be held at venues throughout the neighborhood,   and there will be book-related vendors under tents in the festival zone on McPherson at Euclid. There will be live music throughout the day.

I’ve singled out several author events to bring to your attention, including the appearance of headliner actor Sally Field at The Chase Park-Plaza on Friday evening, September 21.

The entire schedule is here, and while you’re on the website be sure to check out “News & Updates.”

The prolific actor will discuss her new book, In Pieces, a deeply searing memoir about being a woman – a famous woman – in the last half of the 20th century.

Please note: Gary Shteyngart WILL personalize your copies of Lake Success and take photos with attendees. Bar Italia will offer a cash bar at this event. 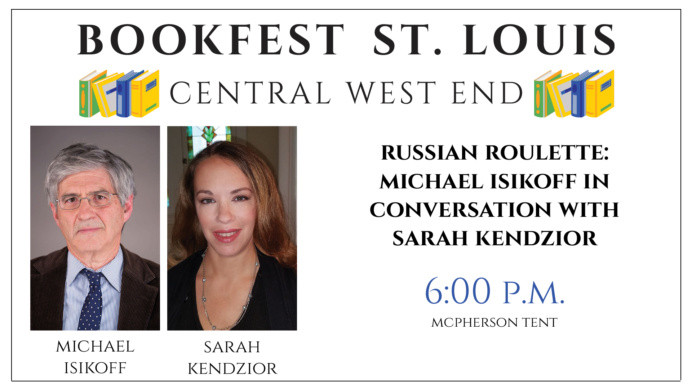 Have a question for the panel? Submit it here and we may ask it during the book festival!

Volunteers are needed, click here to find out what’s involved. You’ll receive a BookFest St. Louis t-shirt and have a great time too.

We’re incredibly fortunate to have BookFest St. Louis in the neighborhood, so be sure to save the dates and take part. There is something for everyone, including kids’ events at Schlafly Library.