The following post describes an opportunity for community involvement that I thought readers should know about. Next Saturday, August 10, from 9 to noon, volunteers are needed to help “Clean up and Green Up the Hodiamont Tracks.”

The purpose of the event is to stimulate interest in the development of the abandoned Metro (Bi-State) right-of-way as part of Great Rivers Greenway’s network of trails throughout the region.

“The Hodiamont Tracks are an inactive space that have the potential to become a greenway where people could walk, jog, ride a bicycle, push a stroller, use a wheelchair or have a picnic.”

Next Saturday’s community-wide effort is spearheaded by Judith Arnold, a resident of the Vandeventer neighborhood, who initially gathered a group of about 20 women from the 7 neighborhoods that border the Tracks to get the effort going. Since that first meeting in early July, the group has expanded to include an additional 20 or so organizers.

So far, about 160 volunteers have signed up for the project. Arnold is hoping for a total of 200 people to volunteer and register. See more information at end of the post on how to participate. 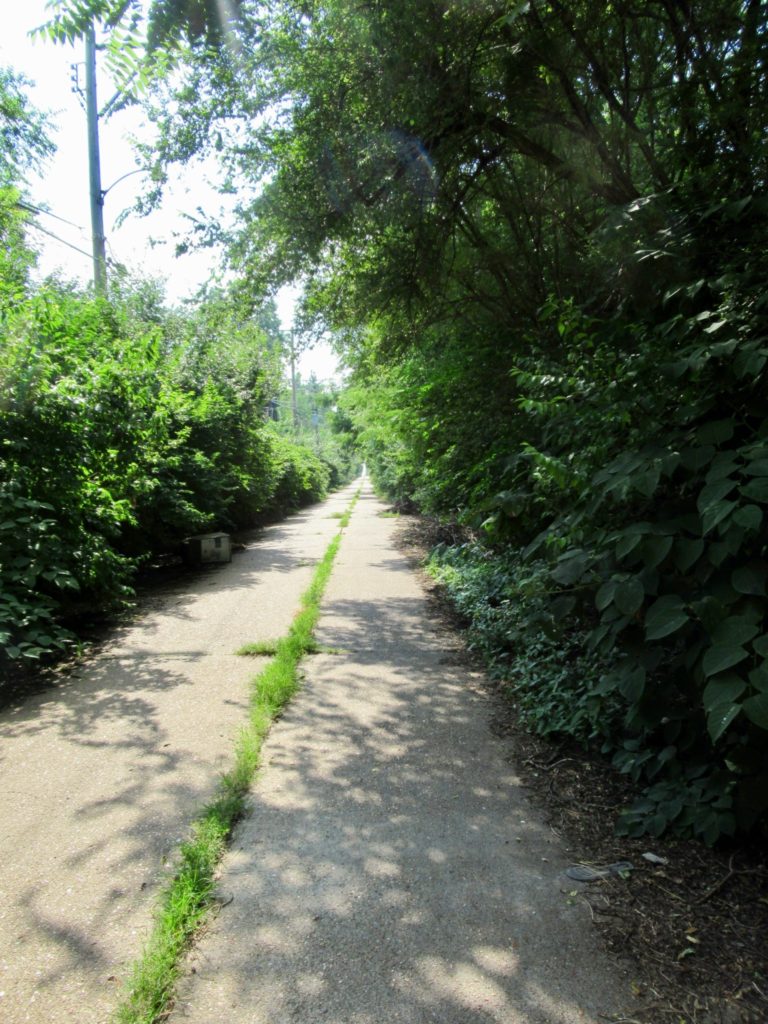 I am on the organizing committee and have driven the length of the 3.5 mile Tracks, which were originally a trolley line and later a bus route, and taken pictures to give you an idea of what current conditions look like. It’s a mixed bag, ranging from surprisingly green and quiet sections to littered/overgrown dumping grounds. 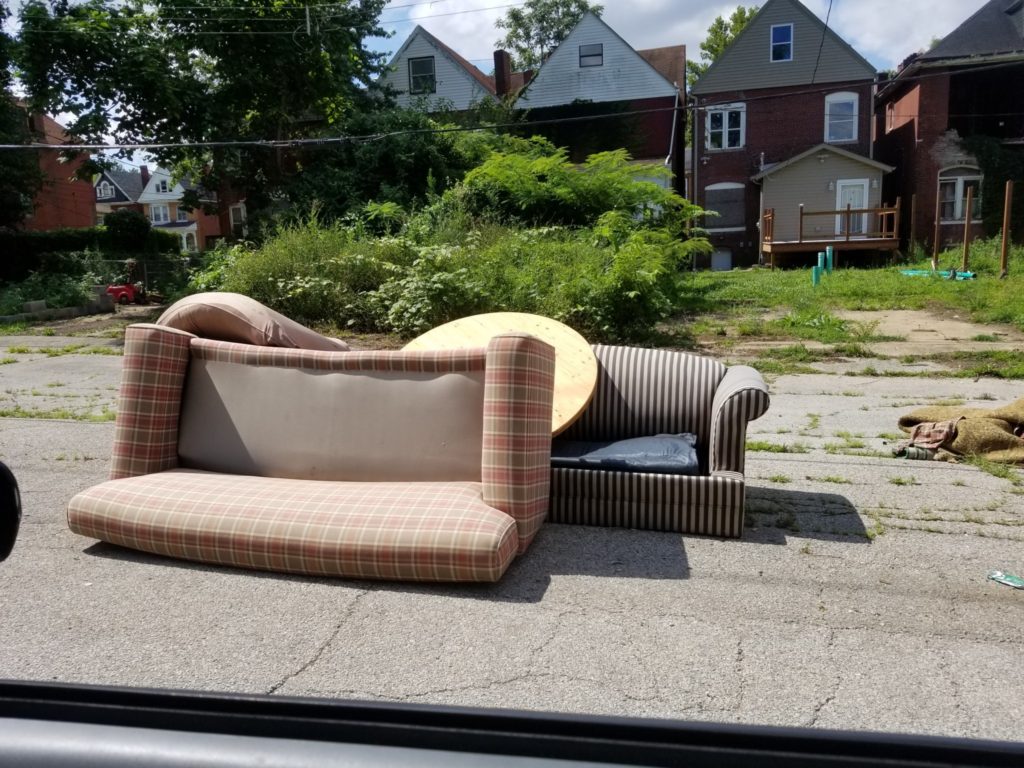 Committee members who live adjacent to the Tracks lament that illegal dumping of trash in their backyards is a common occurrence. 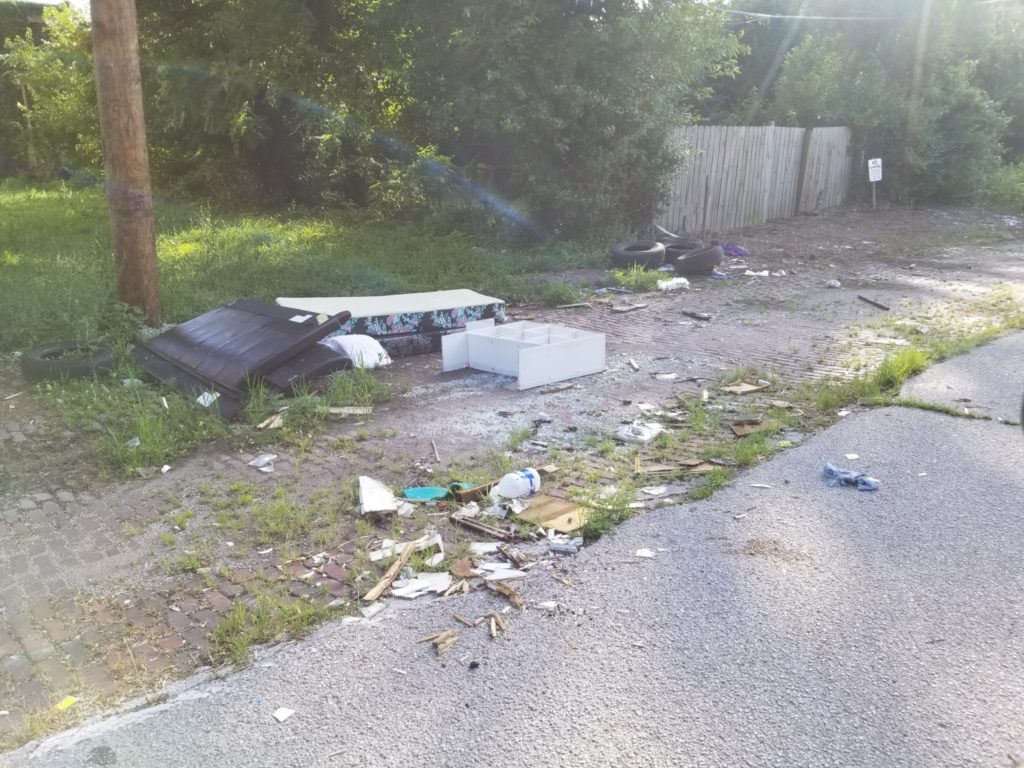 The City of St. Louis Forestry and Refuse Divisions have been providing preliminary services in advance of the cleanup day, and will be out in force to assist on August 10. The task that day will be to put the finishing touches on the cleanup effort and to demonstrate that there is broad community support for the development of a new greenway along the abandoned route.

“One of the major concerns is ongoing maintenance,” said Judith Arnold. “We’re beginning to tackle this issue with a cleanup day in hopes that residents living near the Tracks will continue to maintain what will become a greenway.” 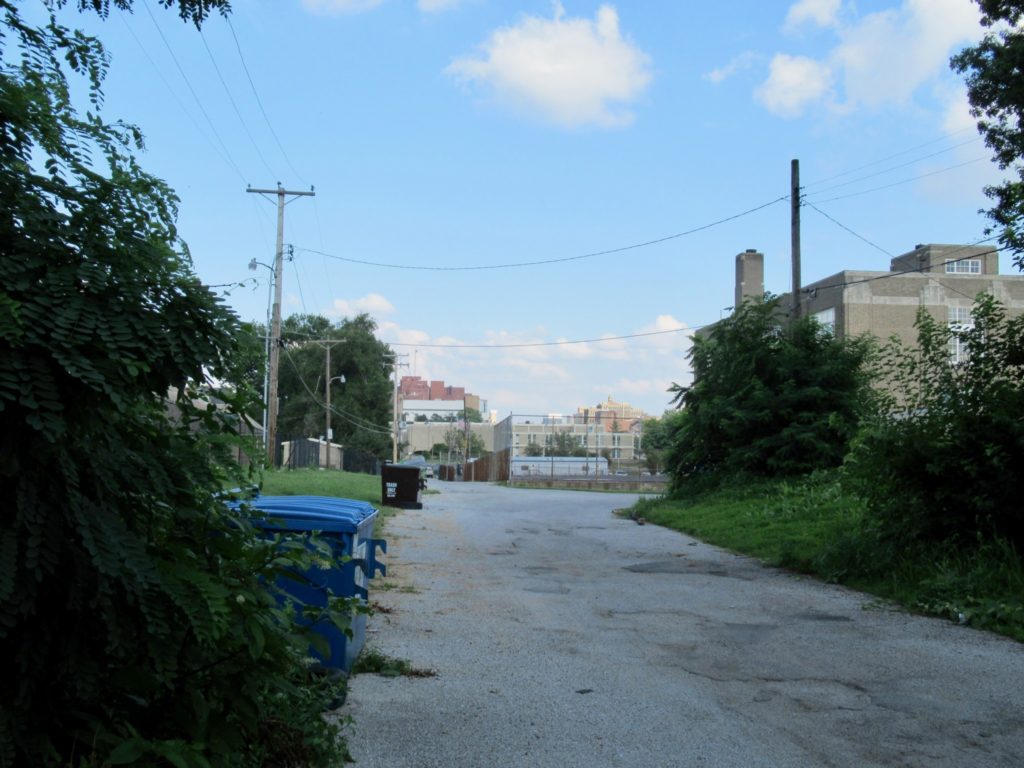 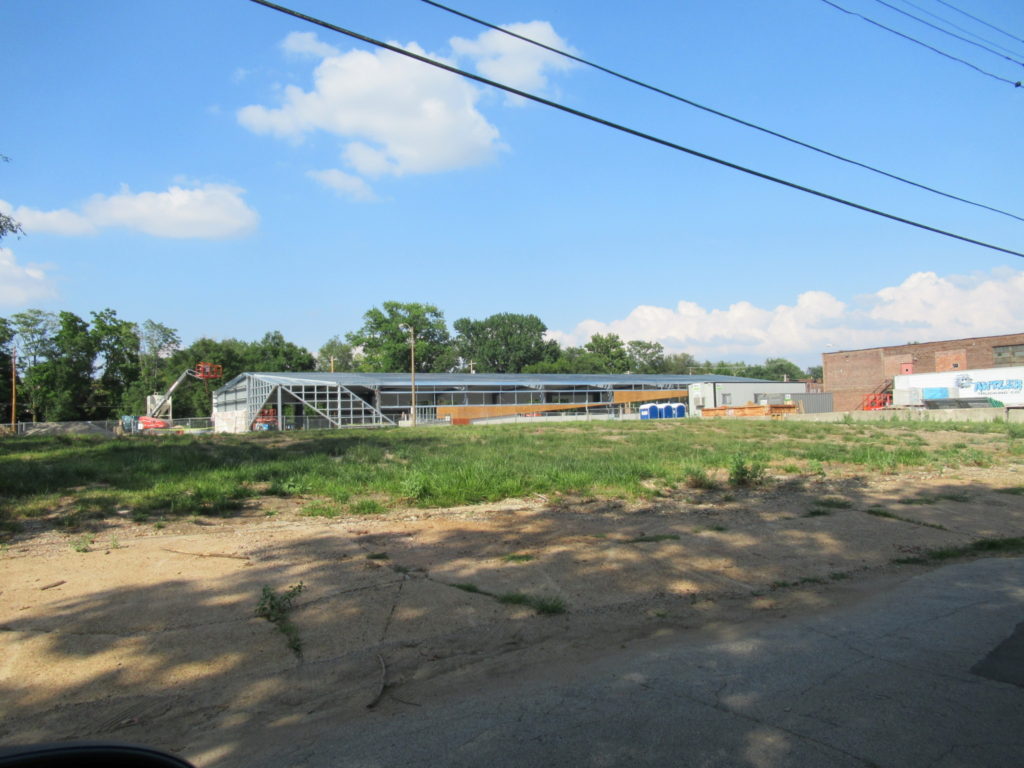 The photo above shows new buildings under construction on the Ranken Technical College campus, which also borders the Hodiamont Tracks. 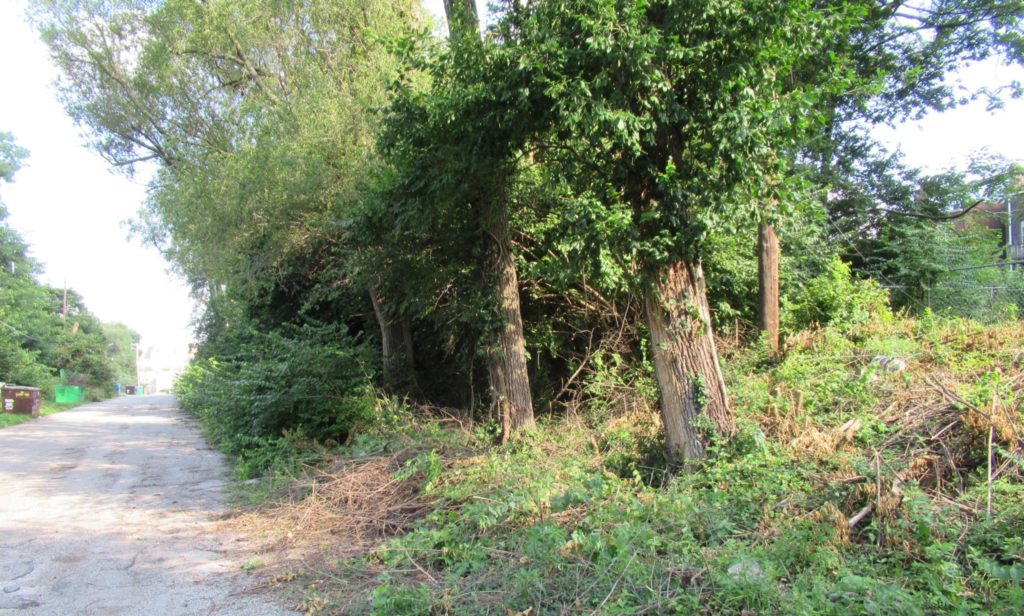 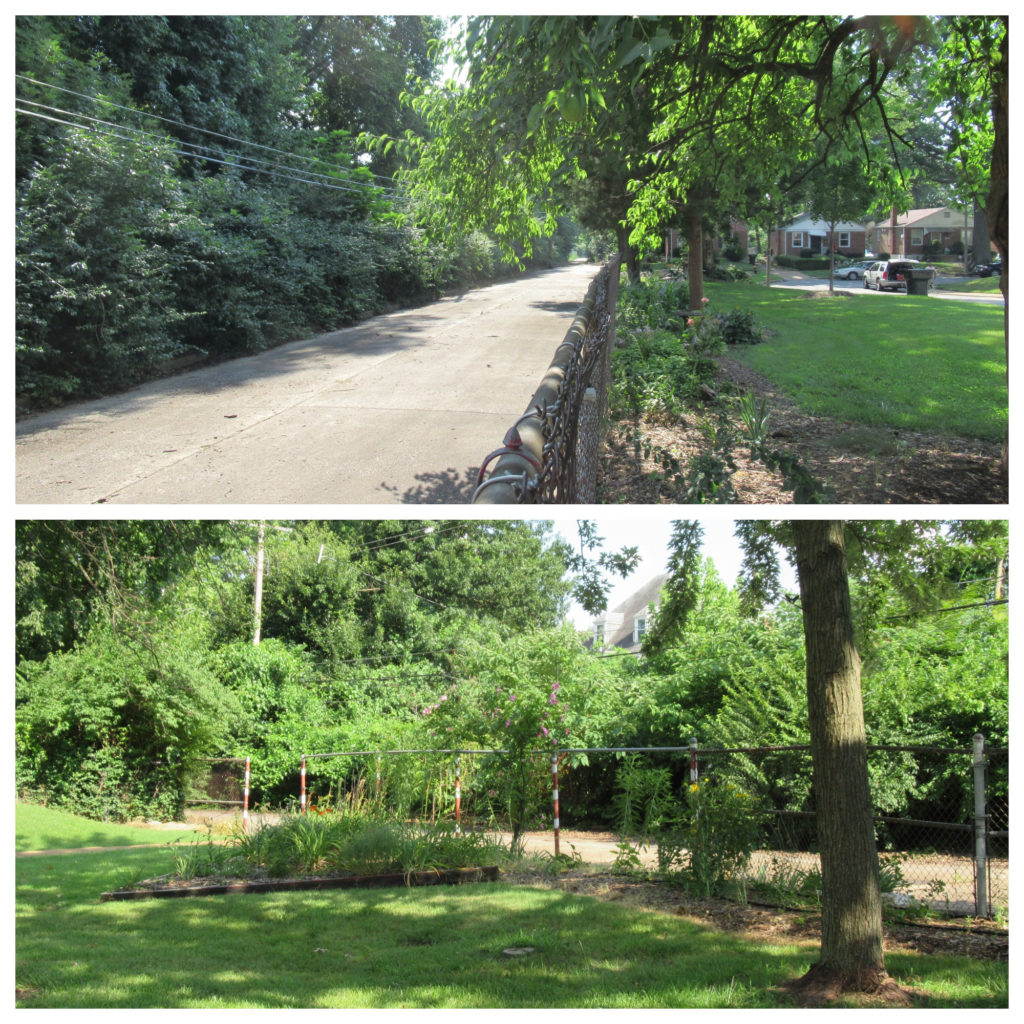 Close to Skinker Blvd., near the western terminus of the Tracks, there’s a charming neighborhood in the City’s 26th Ward that was a total surprise to me. Gardens and manicured lawns occupy common areas adjacent to the tracks, and many of the houses and surrounding yards look like they could be on a country lane. 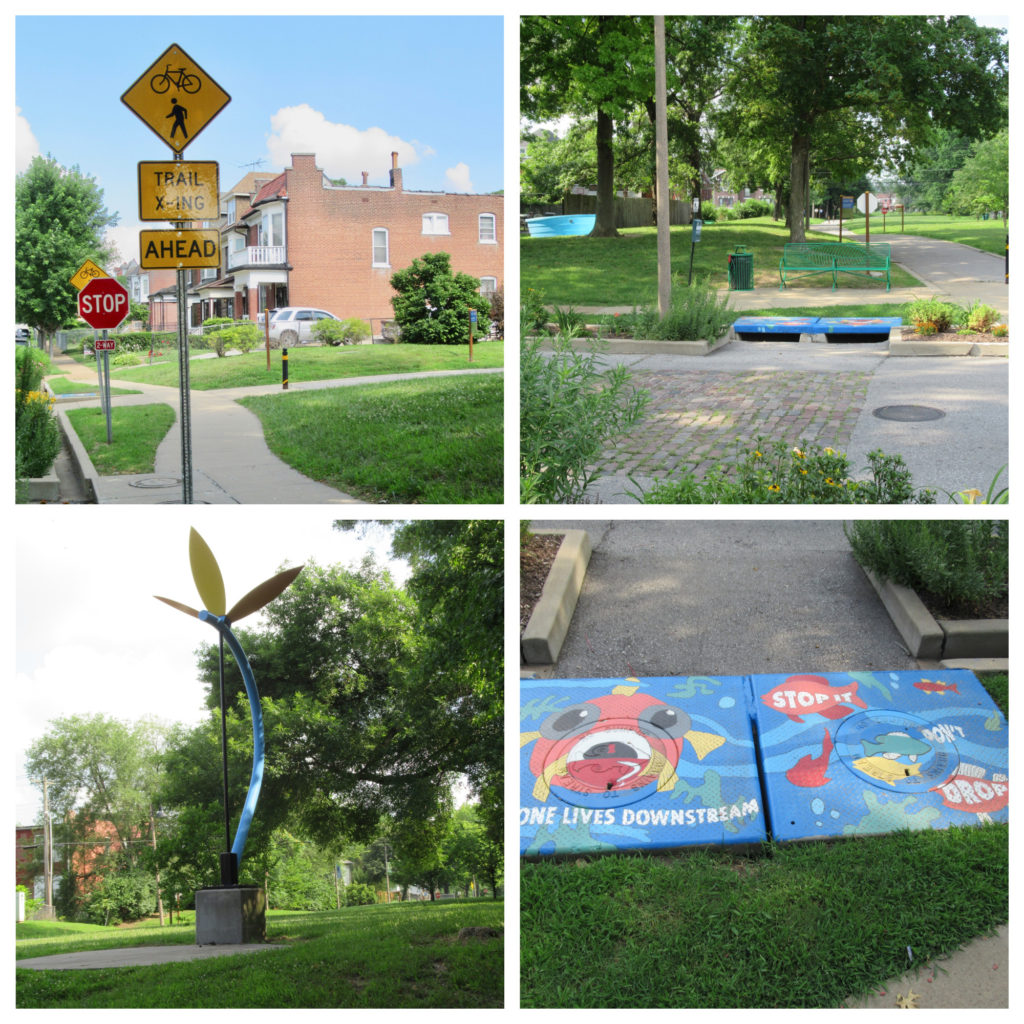 The Ruth Porter Mall, which starts at DeBaliviere and Delmar, intersects the Hodiamont Tracks several blocks north and offers an example of what the Tracks could become.

Though 95% of residents who participated in an engagement study conducted by Great Rivers Greenway say they want a greenway along the Hodiamont Tracks, the decision to include the 3.5 mile stretch as part of the Greenway system is not a done deal. If the decision is made to proceed, residents see the potential for increased property values, enhanced safety, and beautification.

Volunteers are scheduled to meet at Lane Tabernacle CME Church, 910 N. Newstead, Saturday, August 10 at 9 a.m. to get their assignments. Gloves, rakes, shovels etc. will be provided by Operation Brightside. All participants are invited to return to the church at noon for a picnic lunch and celebration of a job well done.

To volunteer, or for more information and to register, visit Clean Up & Green Up on Facebook, or an eventbrite page (here).