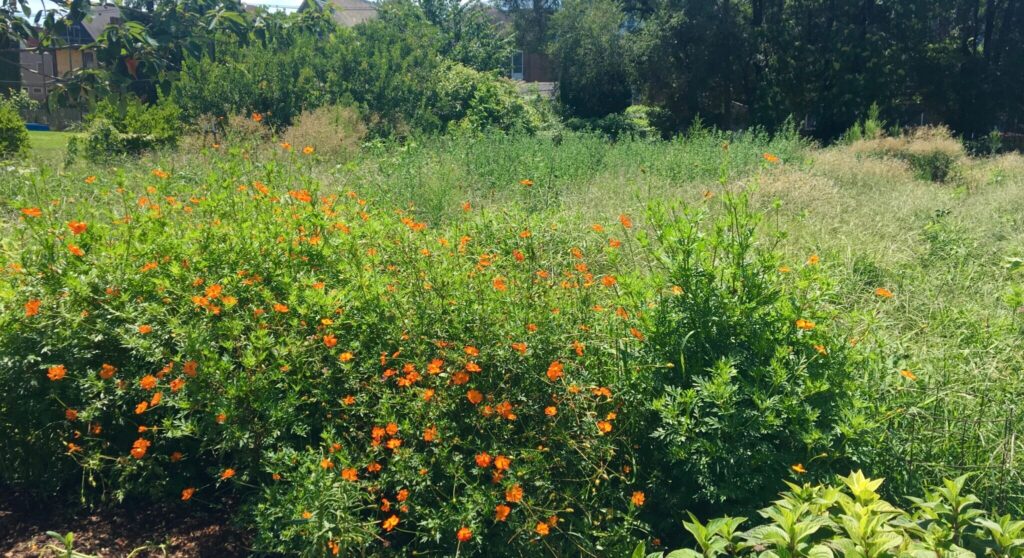 There has been so much confusion and noise hitting us from every corner of our lives this year that, like everyone, I have sought to find peaceful moments whenever and wherever I can.

A special example is Bowood Farms’ overgrown vegetable garden, which in this year of the pandemic has been allowed to return to a natural state. The sight of tall sunflowers and groups of birds swooping over the brush into the dense trees, while insects hum (loudly!) in the background, is truly calming. 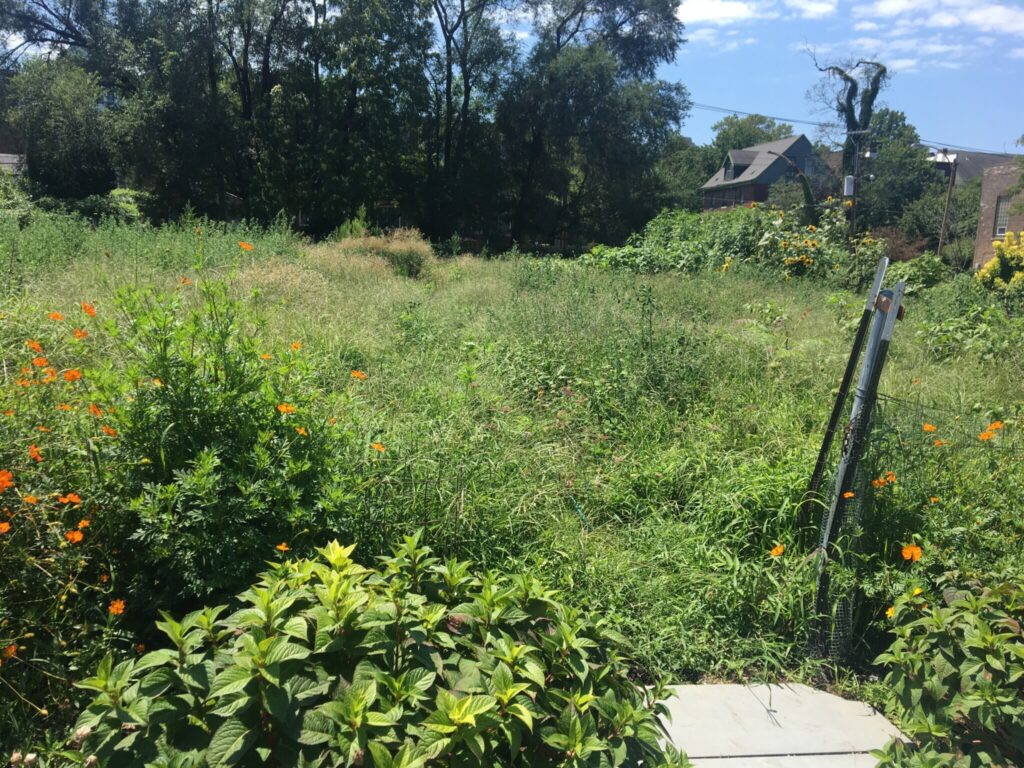 In years past the garden has been filled with neat rows of vegetables waiting to be harvested for Bowood’s Cafe Osage, but not this year when the cafe was closed during planting season, and no one knew if and when restaurants would reopen.

For now, I welcome the change and the peace the garden affords. It seems even more appropriate with the passing of Bowood Farms’ founder John McPheeters in early June. John was a true visionary in creating the beautiful, imaginative garden shop and cafe on the northern edge of the CWE, guiding its evolution into a treasured destination over the ensuing years.

John was also a staunch supporter of both the Missouri Chapter of The Nature Conservancy and Magnificent Missouri, In a serendipitous way, it seems fitting that the garden was left untended and allowed to return to nature this summer. 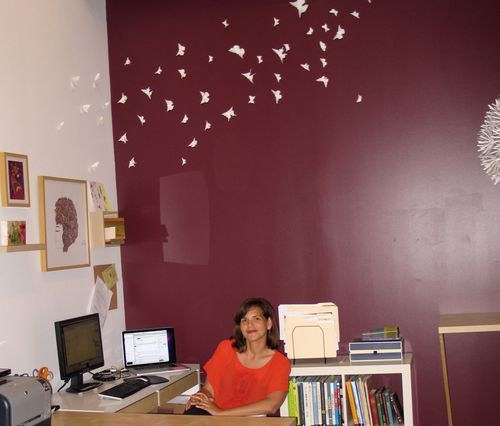 I hope you will find the following post about Diann Cage, "the divine Ms. D.," as much fun to read as it has been putting it together. It has taken me forever and a day to get this written, and for that I apologize to Diann. As she said to me yesterday, "you are putting way too much thought into it!"

Hand-in-hand with plotting a new focus for her graphic design business based in the CWE, Diann Cage, above, has given her 350 s.f. studio at the Pierce Arrow Building a makeover too. Diann started her own business, Diann Cage Design Co., three years ago, and has worked with a variety of clients including the
St. Louis Beacon, Central West End Association, and Magnificent Missouri, the organization formed to support Missouri's conservation groups. She also worked on a rebranding project for Stevens Institute of Business & Arts (formerly known as Patricia Stevens College), and has designed websites for small businesses and authors (William Adler & CWEnder Nick Reding).

While she will continue to work on these types of projects, she has also started connecting with companies in the home and leisure markets (sports, garden, recreation). Diann has recently completed a website and branding project for The Refined Room, a vintage and used furniture store located in Brentwood.

To me, one of the most exciting projects this talented graphic designer has picked up is an assignment from a Chicago publisher who is relaunching December, a literary magazine that flourished in the 60s & 70s. Diann is designing the new magazine from cover to cover. The first issue of the revamped December will be released in (you guessed it!) December, 2013. Diann forwarded covers from past issues of the magazine, which I've added to the post shown below. 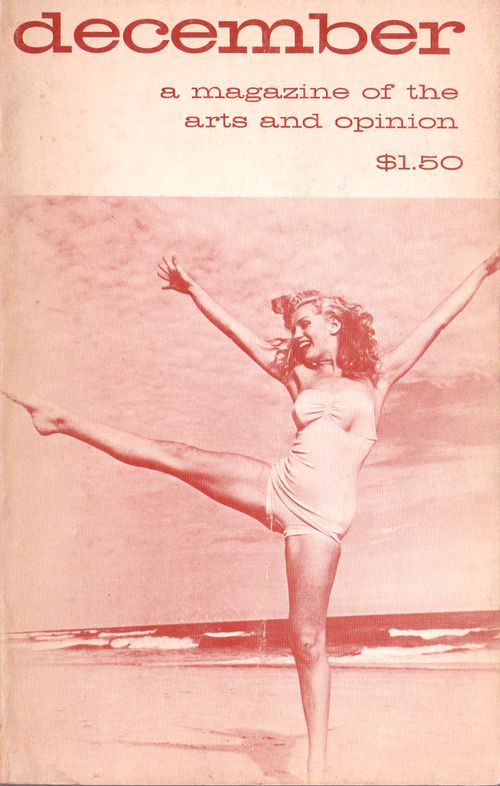 A 1966 issue of December featured Marilyn Monroe on the cover, and contributors to a later issue included cartoonist R Crumb, below. 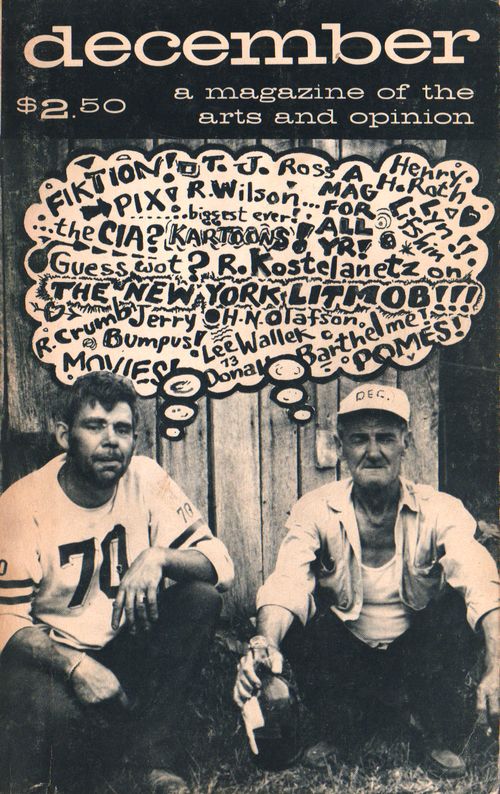 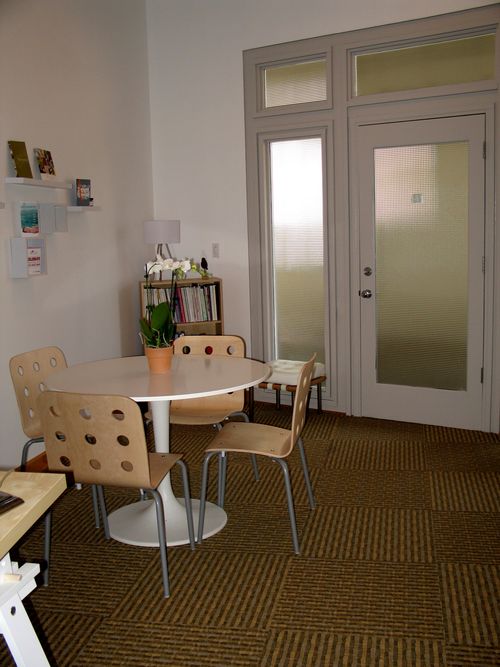 Diann shares space with another CWEnder, Suzanne Miller, founder of Magellan Communications, a company that focuses on business communications strategy, particularly in international, cross-border communications and multi-market campaigns. Diann said she hasn't the foggiest idea what Suzanne is talking about when she is on the phone with her clients from around the world. I plan to figure it out and do a post about Suzanne sometime soon.

At some point Diann and Suzanne decided they wanted to redecorate the space, as creatively and inexpensively as possible. The pair picked furnishings from IKEA in Chicago and Target online. Carpet squares came from overstock.com. 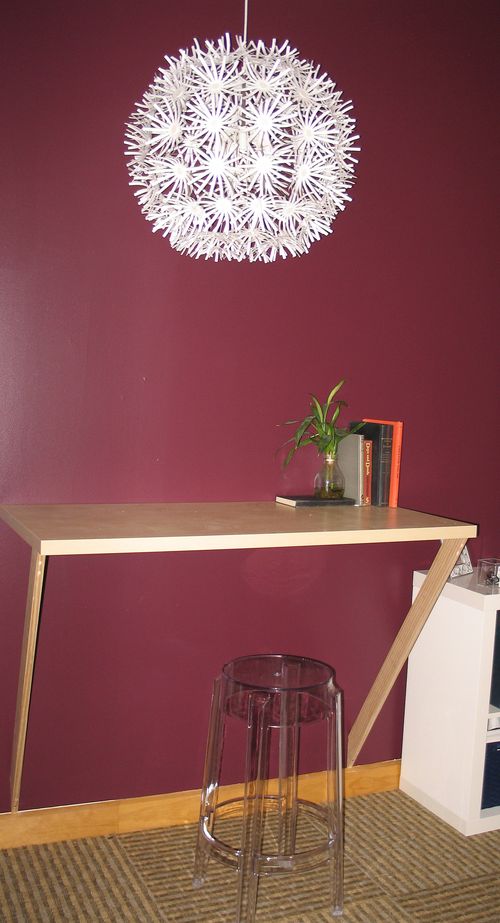 The paper lantern, above, is from Ikea. 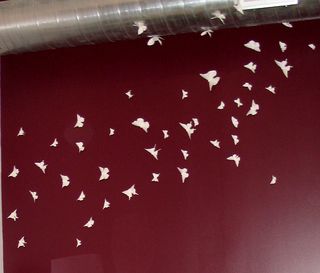 Diann is a Gossip Girl fan and said the paper butterflies she purchased on Etsy, right, remind her of art on the wall in a bedroom featured in the t.v. series. 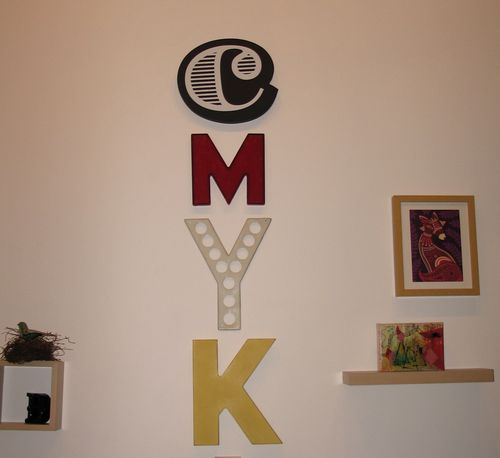 The initials on the wall represent the four basic colors used for printing color images: cyan, magenta, yellow, & key, which is black. Framed art was purchased at Urban Outfitters. 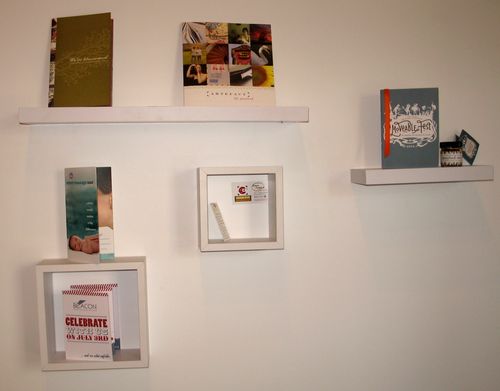 Examples of some of Diann's work are displayed on a wall in the studio, above. 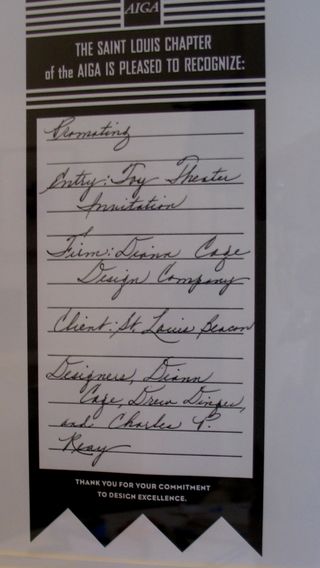 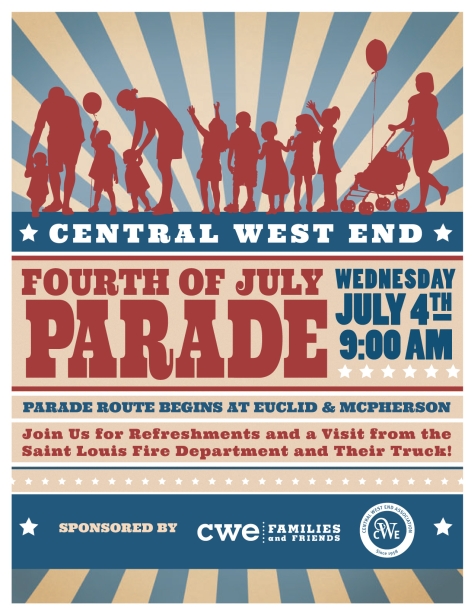 We can thank Diann's husband Lance, the new marketing principal and senior vice president at HOK, for initially luring her to the CWE from Seattle. Her first job here was at Falk-Harrison
Creative, which was located on West Pine. While
planning her wedding, she decided she wanted to be a wedding
planner and make pretty things like invitations. To that end she started a custom
stationery business and, in her words, "failed miserably." Diann did,
however, build a high-end photo album company and also did freelance work for Seattle-based Artefact working out of a 2 x 3' closet outfitted as an office in her CWE home. Five years ago when she was working as a graphic designer for a company based in Las Vegas, she took the leap and opened a studio right around the corner from her home. We're so glad she's here and that she has become such a strong presence in the neighborhood.

Magnificent Missouri, a new charitable organization that was formed to support conservation groups in the state of Missouri, is having its first fundraiser at Bowood Farms next Sunday, September 30. The organization was founded by Dan Burkhardt and John McPheeters of Bowood Farms. Seventeen organizations that promote conservation in Missouri will benefit from the fundraiser. The concept behind including so many organizations as beneficiaries of one event is to promote collaboration among them, and make it easy for attendees to support them all in one fell swoop. 100% of the $200 per person ticket price goes to the organizations (see list on map below or on website).

The beautiful and chock-full-of-Missouri-trivia invitation (seen here) designed by talented CWEnder Diann Cage, is laid out as if it were a map. The artwork incorporated into the invitation was donated by
artist Bryan Haynes, who will show his art at the event.

Some of the best chefs in St. Louis will be barbecuing heritage-breed pork and other meats over an open-pit fire at Bowood. They will also prepare locally-harvested produce. Schlafly Beer and Missouri wines will be available, and music will be provided by the Augusta Bottoms Consort. The guest chefs are extremely supportive of conservation efforts and have agreed to continue their support of Magnificent Missouri by cooking several smaller dinners throughout the year. There is talk of a possible event at the Audubon Center at Riverlands later this fall. 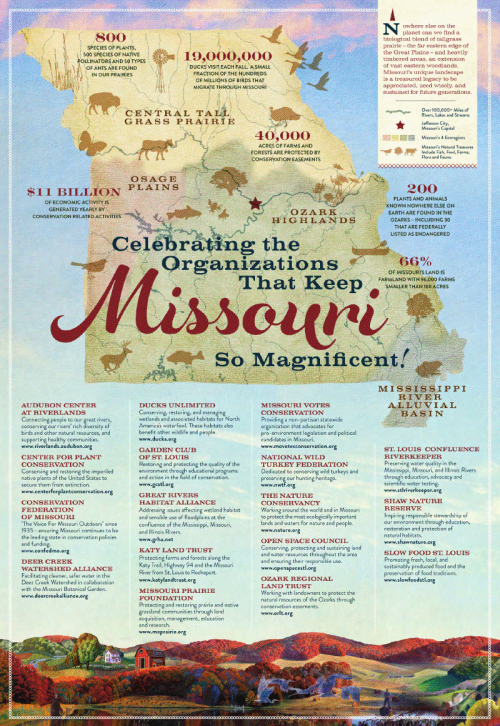 The trivia on the map include little-known (at least to me) facts, such as "200 plants and animals known nowhere else on earth are found in the Ozarks including 30 that are federally listed as endangered." And, "$11 billion of economic activity is generated yearly by conservation-related activities."

Generous sponsors have underwritten the entire cost of the benefit. It was interesting to me that the Chipotle Mexican Grill chain is into the connection between food and the environment in a big way, and John McPheeters said that they are incredibly excited to be sponsoring this event.  Chipotle will be giving away copies of Maddie Earnest and Liz Fathman's book Missouri Harvest (see earlier post here) at the event next Sunday.

Pick up an invitation at Bowood Farms or go to the website for more information and to RSVP. Magnificent Missouri at Bowood Farms, Sunday, September 30, 3 to 7 p.m.