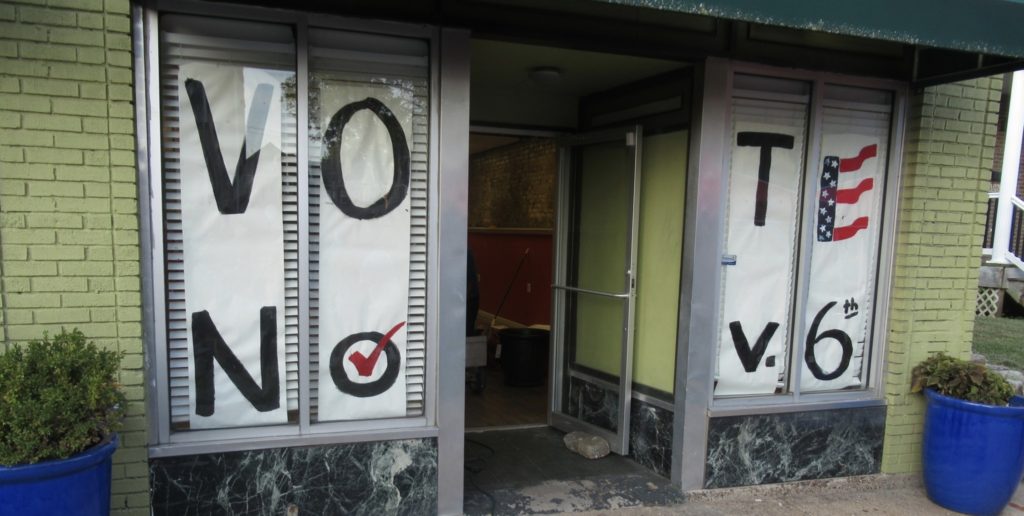 Taking a cue from a storefront in the 4200 block of Delmar, and from two dear friends, Mary Engelbreit and Charlotte Lyons, who are encouraging people to vote in their signature artsy way, I want to reinforce their important message by sharing their suggestions with you.

Charlotte Lyons, one of my oldest friends from earlier days in the neighborhood, posted a diy VOTE pin on Instagram and Facebook. 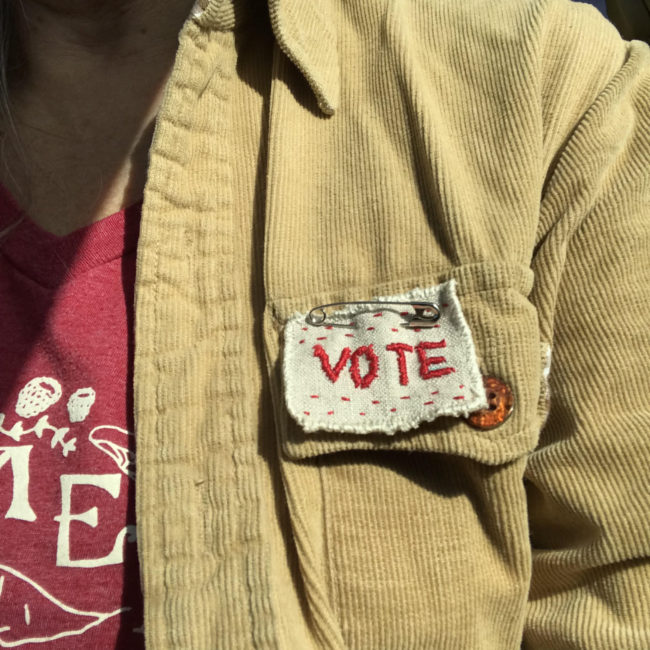 “Last night I made a patch”, she posted. “Don’t let what you can’t do get in front of what you CAN do. Vote in November! I’m going to wear it everyday and everywhere. Make one and pin it onto your coat or shirt or handbag.”

If embroidery is not one of your many talents,  simply pen the message on a piece of fabric and wear it proudly. 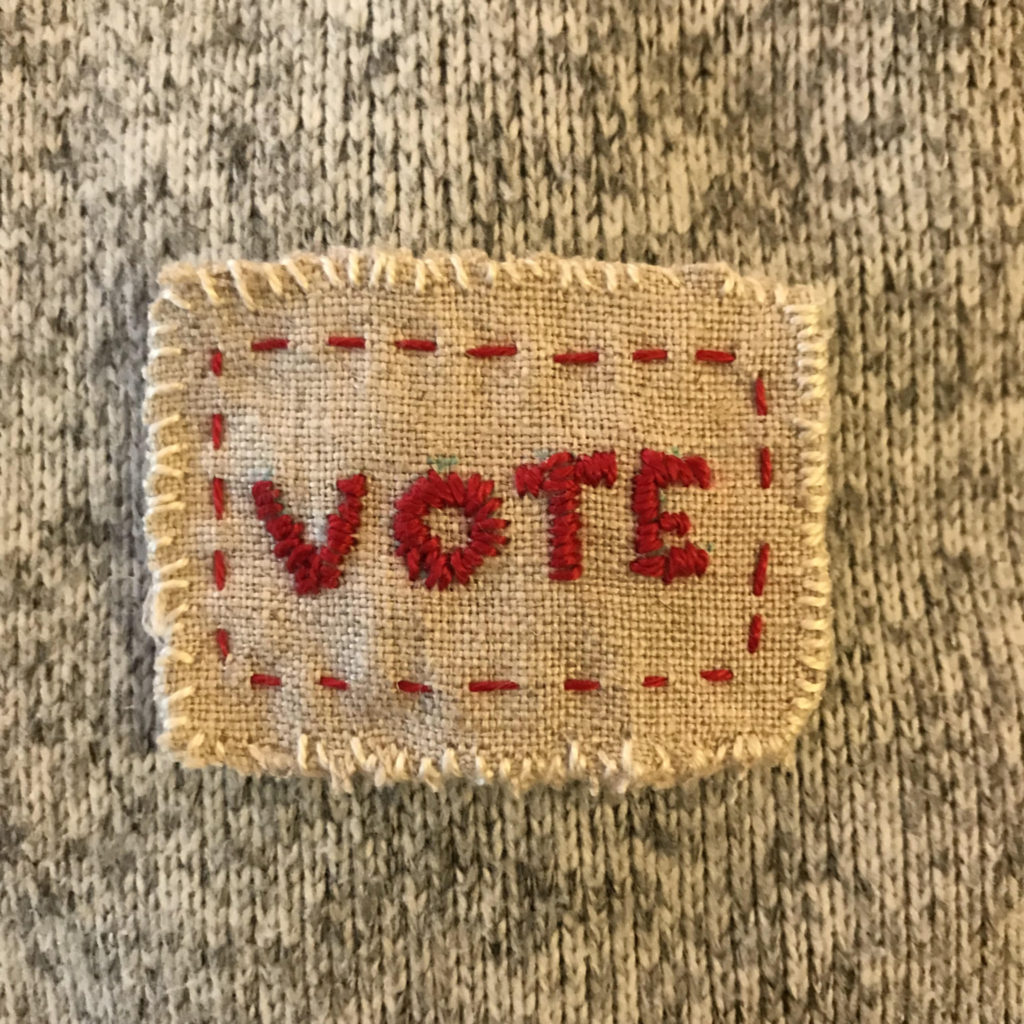 And from artist Mary Engelbreit: 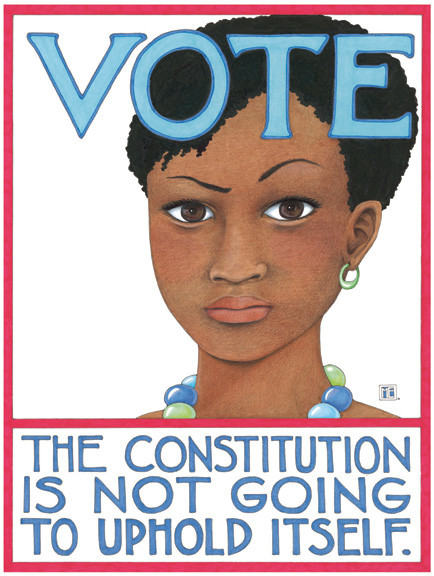 Mary, another longtime friend, created a VOTE poster she is offering as a free download on the ME website.  Look for a VOTE tote bag, $26, on the website too.

Thanks to both Charlotte and Mary for their inspiration. There’s power in this simple message: VOTE on November 6!

P.S. – Here’s a post on a craft weekend Mary and Charlotte hosted in the Central West End in June of 2017.

The dark side of the Queen of Cute

There is a flip side to the public persona artist Mary Engelbreit—a.k.a. “the Queen of Cute”—has been projecting to her many fans for the past 40 years. Both personalities are on display on a card rack that was installed recently at Left Bank Books. Half of the rack contains Mary’s well-known traditional cards, showing brightly-colored drawings with inspirational messages in the artist’s signature style (shown immediately below), while the other half of the rack features her newer Engeldark line, a series of black & white illustrations with an edgier message. 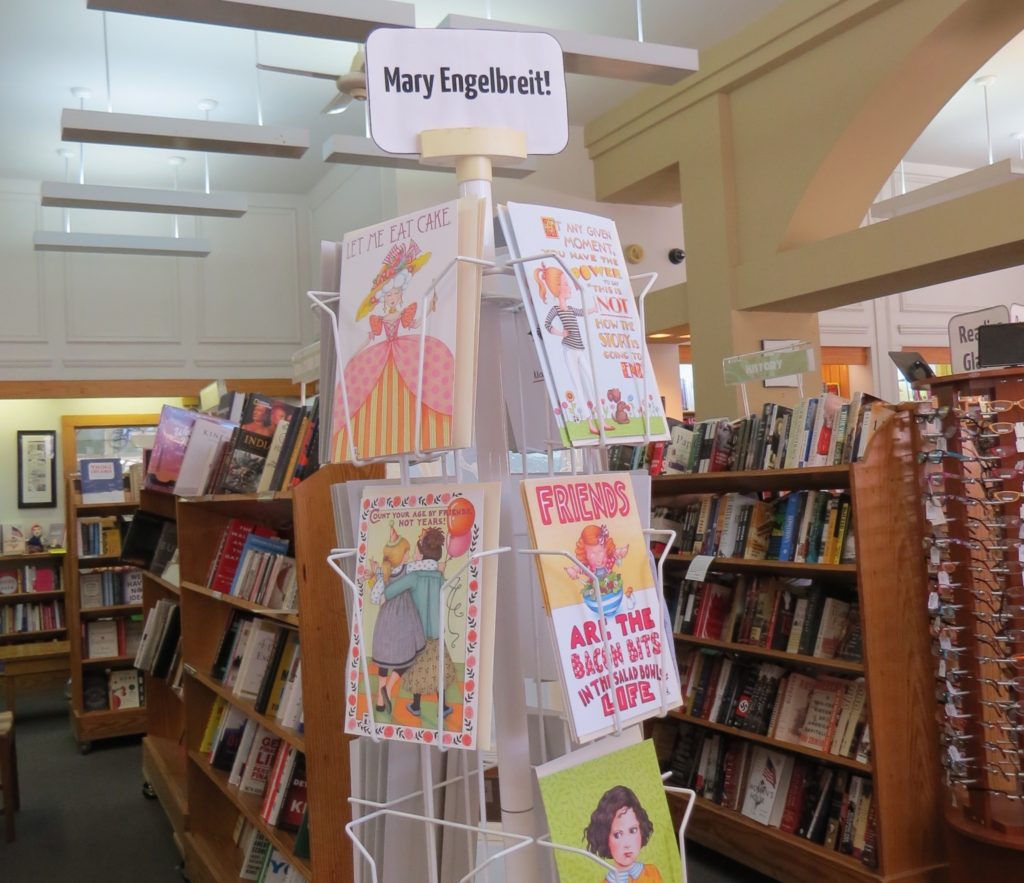 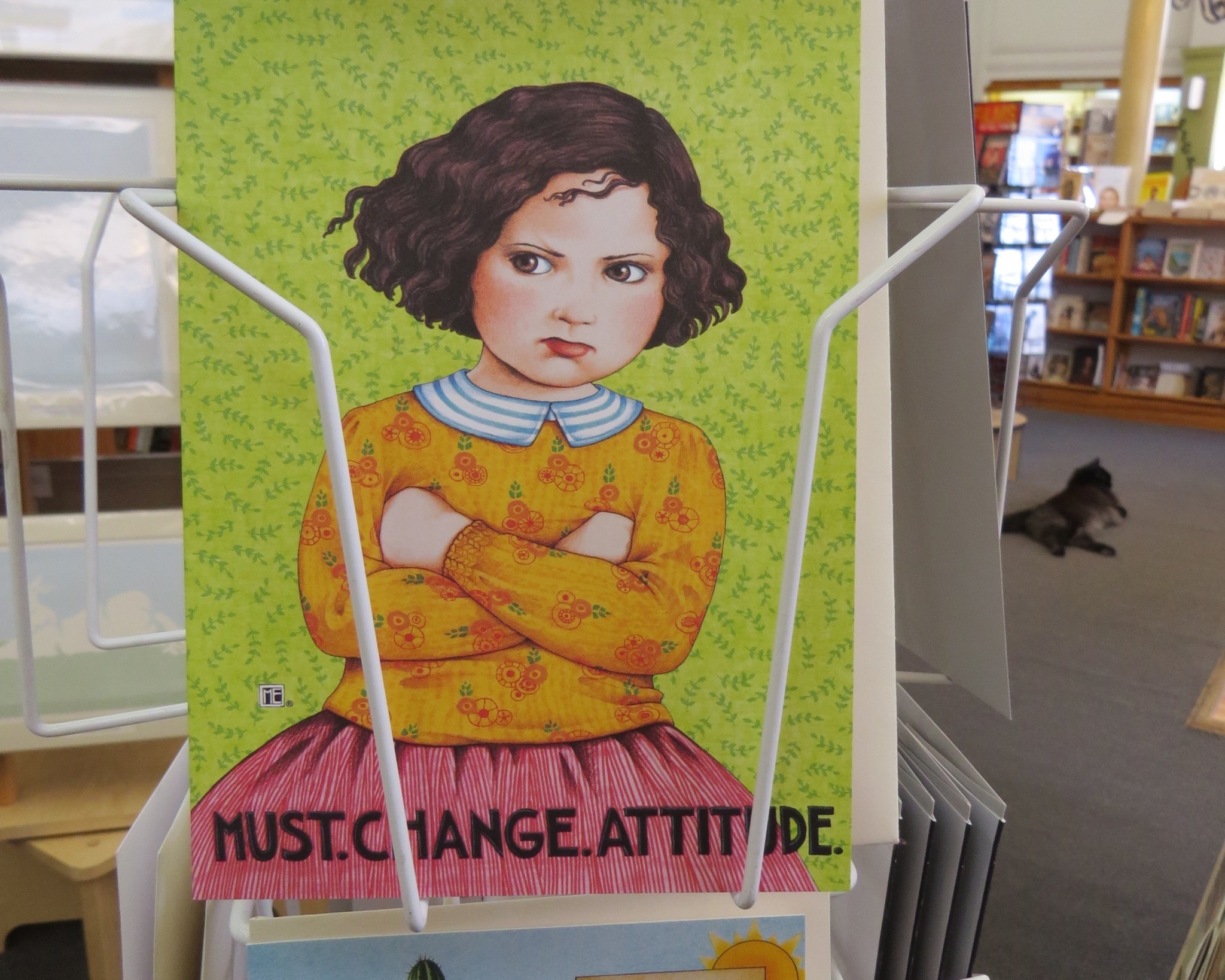 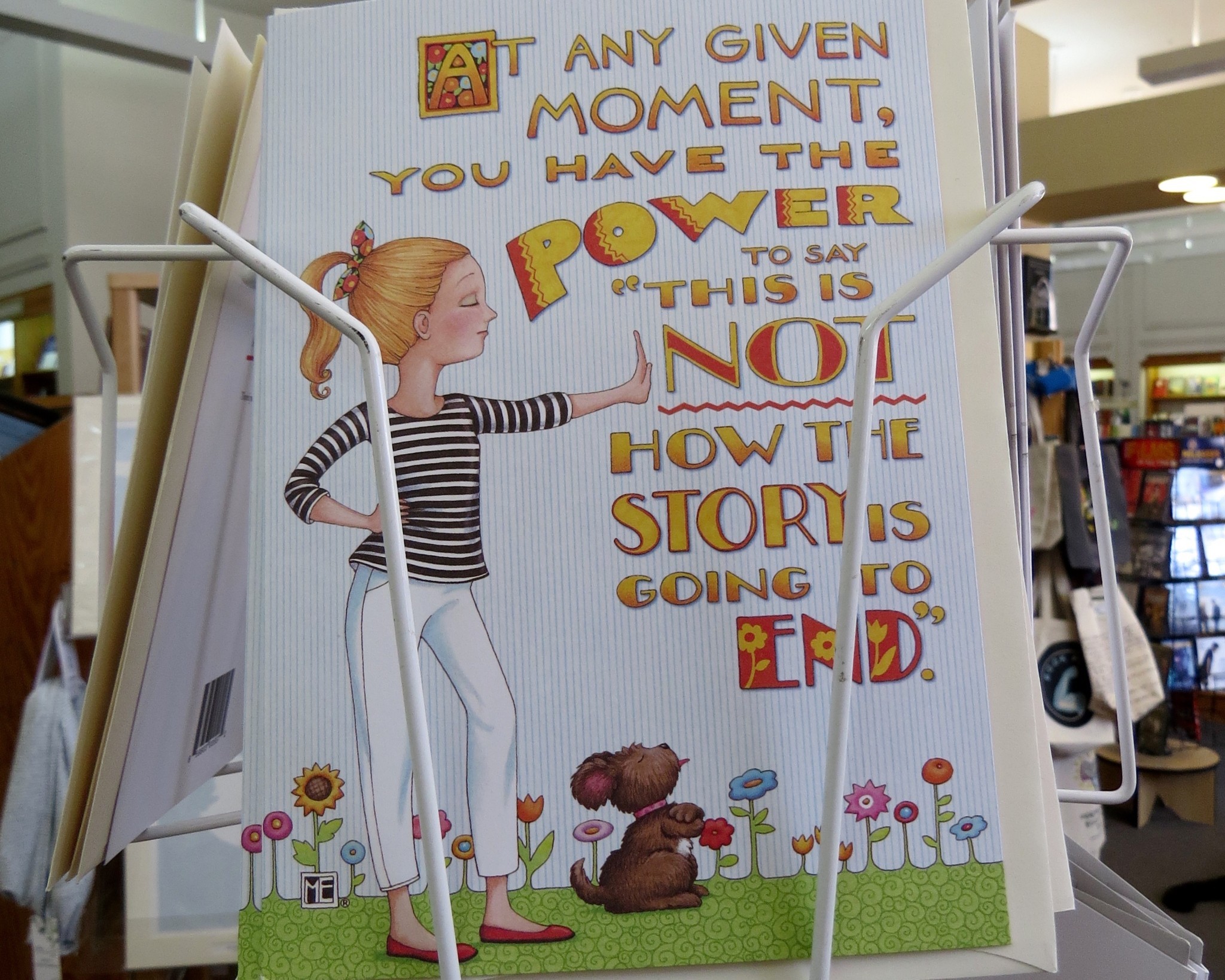 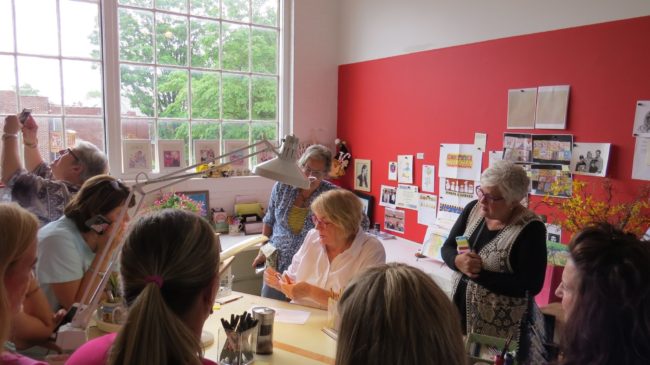 The photo above was taken last summer during a crafting workshop Mary held in her CWE studio along with long-time friend, former St. Louisan Charlotte Lyons.

When asked how the Engeldark series came to be, Mary explained: “For over 40 years I’ve been producing cute little drawings with sweet sayings, and they’ve done very, very well. But I like to think of myself as a well-rounded person, with many sides to my personality. It was kind of a joke to people who knew me that I was perceived as such a sweet, goody-goody kind of person, when the reality was a little different. We’d joke about the kinds of cards I’d really like to make, but of course mainstream card companies had, and very sensibly so, no interest in publishing cards like that. And I had no desire to rock my stable boat. But then I got old and I started my own card company again, besides still working with American Greetings.  I still make my regular sweet cards, but now I also get to express my ‘dark’ side. With age comes a freeing feeling of ‘I don’t care anymore.’ And my Mary Engeldark calendar and cards are now our bestselling items!”

A different take on “cute.”

An early summer workshop with Mary Engelbreit and Charlotte Lyons 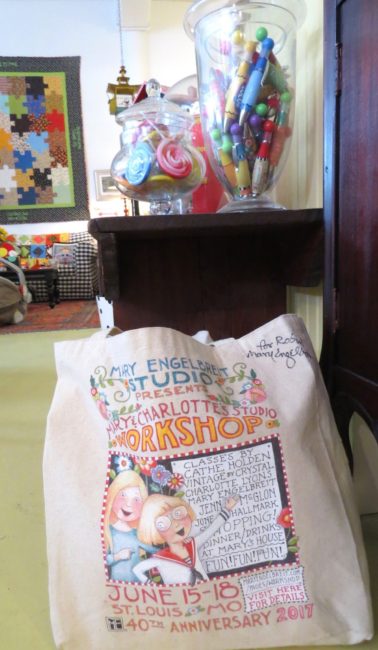 Earlier this summer Mary Engelbreit celebrated the 40th Anniversary of her 1st licensing agreement by hosting a crafting workshop with dear friend and former CWEnder Charlotte Lyons. Mary and Charlotte’s Studio Workshop sold out as soon as the event was posted on social media 9 months earlier, and on June 15 twenty-two women from around the country—Chicago, Santa Fe, New York, Seattle, Texas, California, and Indiana—arrived at Mary’s Studio in the Central West End.

There were 5 instructors, in addition to Mary and Charlotte— “super stars” in the crafting field—who taught a variety of classes over 3 1/2 jam-packed days. An important side-benefit to attending crafting weekends, which have become extremely popular over the past few years, is the friendships that are made. Many women were able to connect with friends made at other workshops, or became fast friends with people they’d never met. Mary added, “lots of instant friendships were formed.” Most of the attendees, who stayed at either the Chase or the Parkway Hotel, were new to St. Louis and in their spare time set out to explore Forest Park, the St. Louis Art Museum, and local restaurants and shops.

After classes in the studio there was a cocktail party at Mary’s home one evening (one of the perks for Mary’s fans), where I understand every nook and cranny was Instagrammed, a visit to the Mary Engelbreit warehouse on The Hill (where Mary’s products were available and vintage goods dealers set up tables showcasing their wares), and a luncheon and “fairy garden” terrarium workshop, using ME fairies as ornaments, at Bowood Farms, followed by a tour of CWE artists’ studios.

Another highlight was Sunday morning’s demonstration on coloring and drawing by Mary Engelbreit, above. 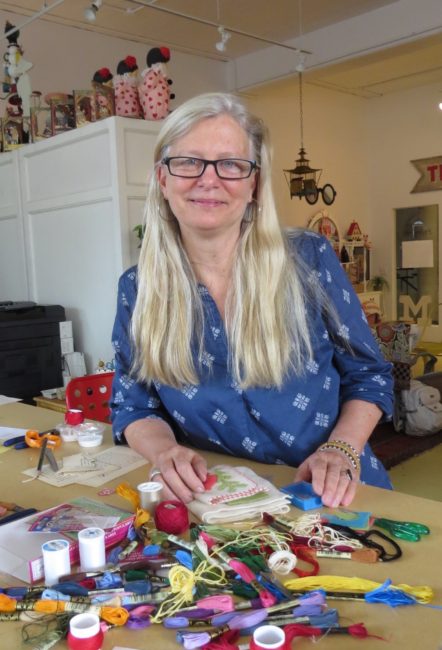 Charlotte Lyons, a pioneer in the crafting-weekend phoenomenon, is Mary Engelbreit’s co-author for the Home Companion book series and has authored several craft books of her own. At the June workshop, she showed the group how to make an appliqué felt wallet (above), just one of many projects she’s demonstrated at crafting events in Los Angeles, New Hampshire, France, and currently around her new hometown of Bennington, Vermont. Here is a link to a recent workshop she co-hosted there. END_OF_DOCUMENT_TOKEN_TO_BE_REPLACED