Finding signs of creativity and hope in the neighborhood 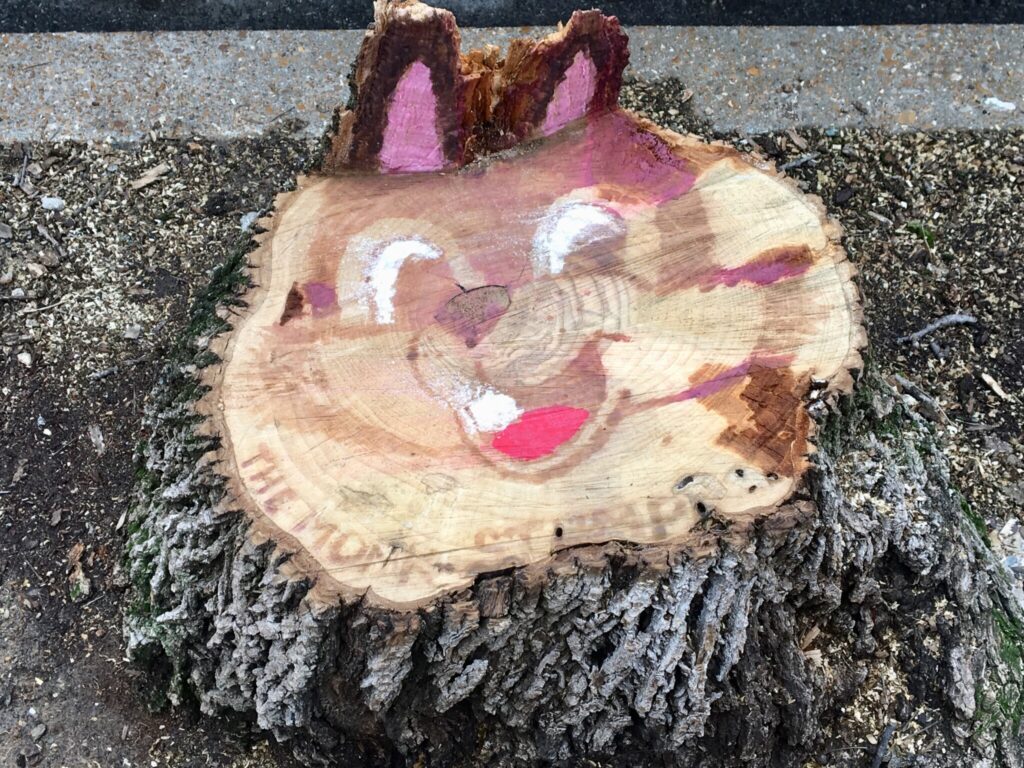 While you’ve been out on your daily walks, have you discovered “The Monk” on Taylor between Pershing and McPherson? A friend told me she had seen a neighborhood mother with her 2 children painting 3 tree stumps on the east side of the street. As of yesterday, two of their creations had washed away. 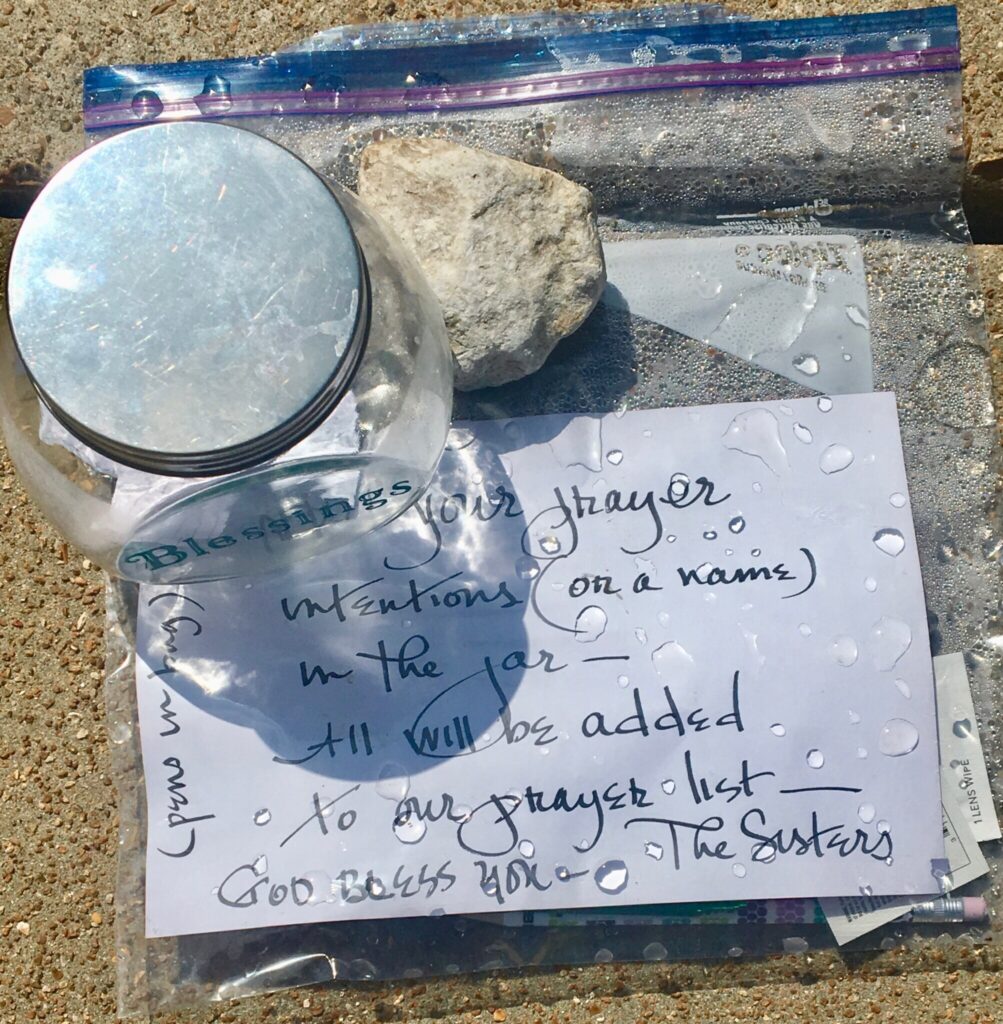 The thoughtful sisters of the Apostle of Heart of Jesus, who live just west of the Cathedral Basilica at 4440 Maryland, left a prayer jar on the front walk, above.

There is a pencil and some paper inside so you can add a name or an intention. Where to start… 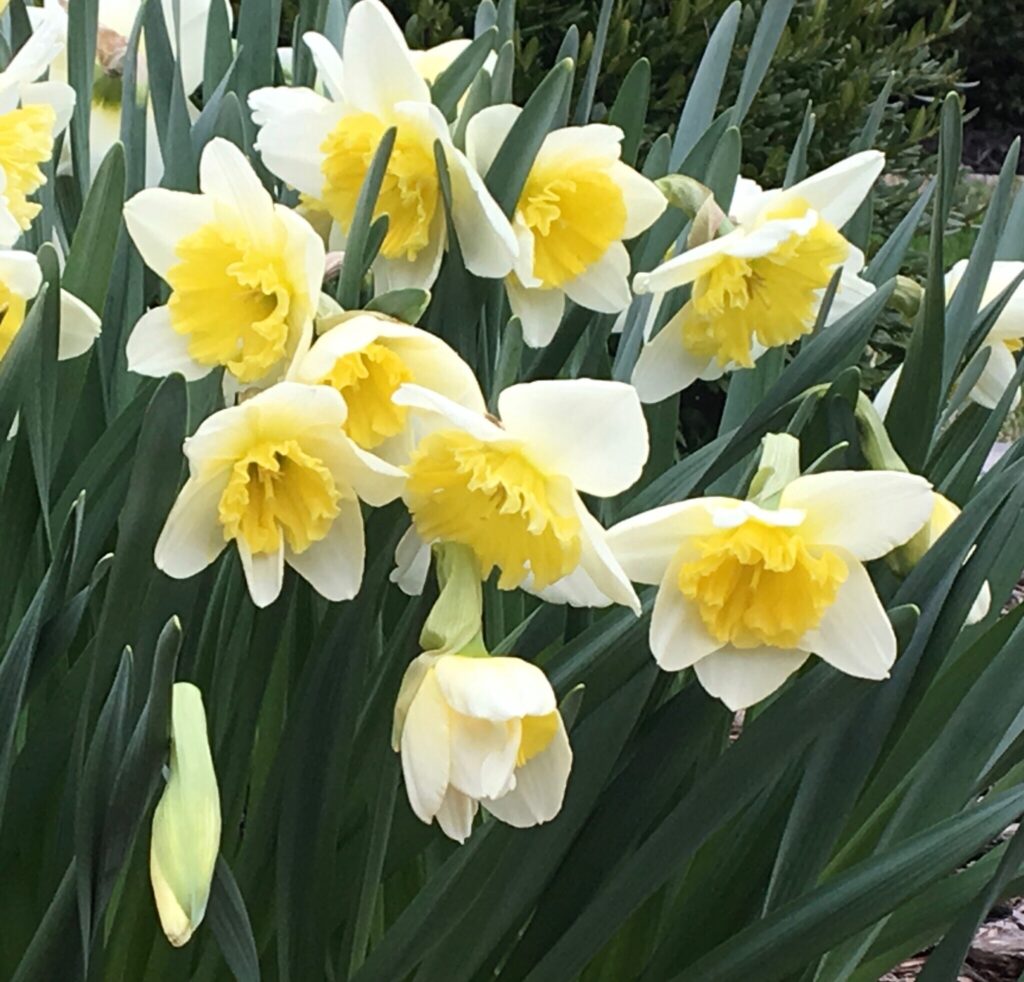 And in this very strange and scary time, the beauty of the Spring season is a reminder that we have a lot to be thankful for. 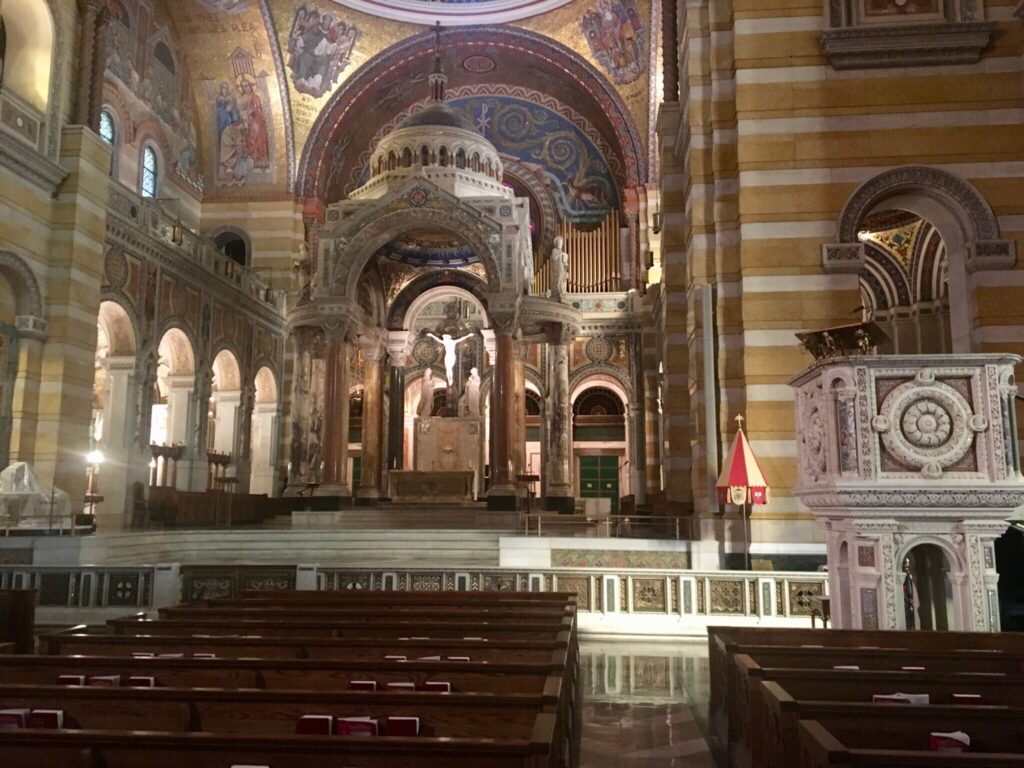 The Cathedral Basilica, 4431 Lindell, is streaming Sunday Mass at 10 a.m.  Weekday Masses are streamed at 8 a.m. If the connection isn’t strong enough there is a link to a youtube channel on the site. 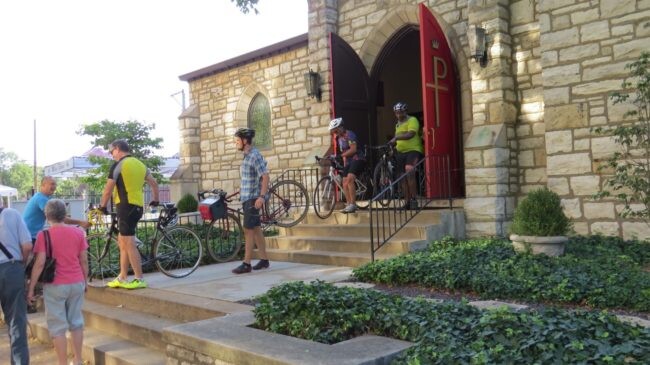 9:15 AM: Children’s programming
10:00 AM: Pre-recorded organ music with Jeff Nall
10:30 AM: Live stream service of prayers, scripture, sermon, Eucharistic adoration, and spiritual communion on FB page. Click here to view the bulletin.
12:00 PM: Virtual coffee hour via Zoom. You can click this link to join via computer. 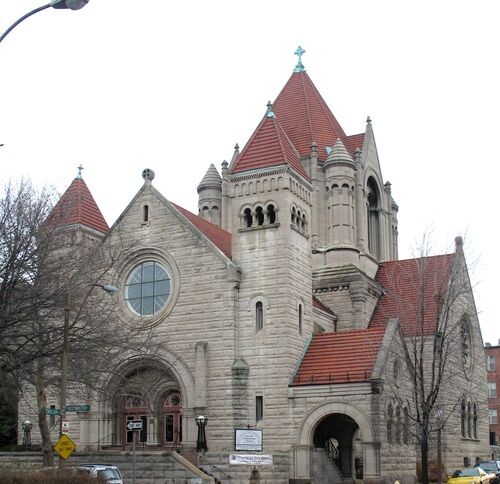 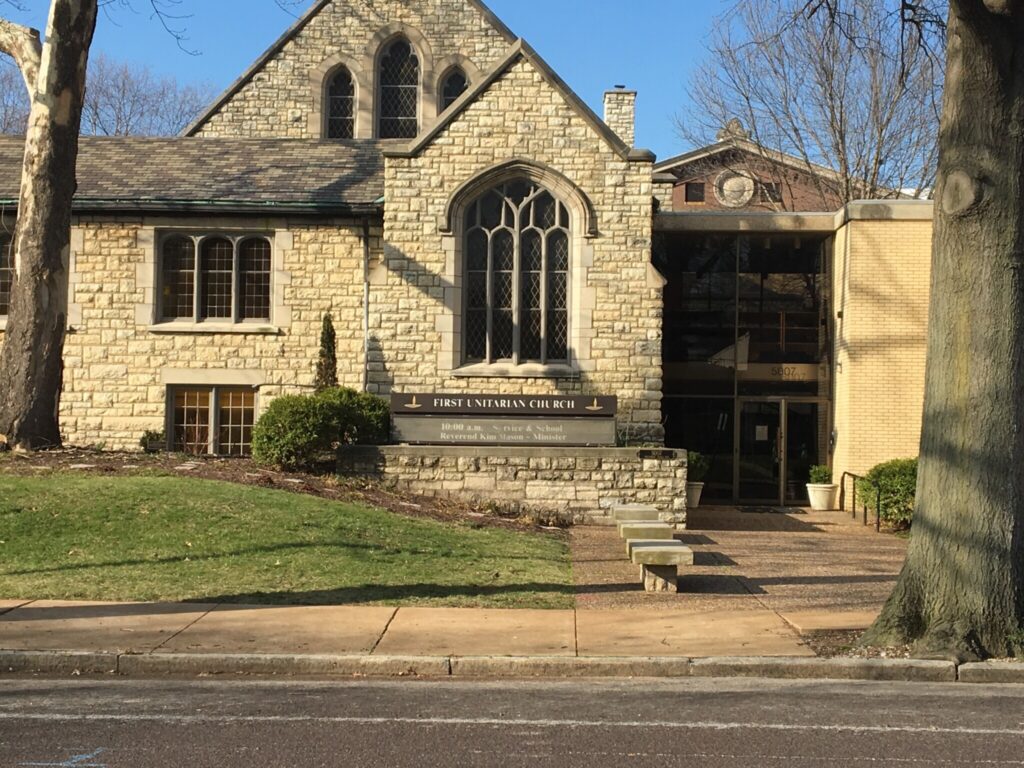 Sunday Service can be found on YOUTUBE at 10:00am & Children’s On-Line Religious Education is at 8:00pm. 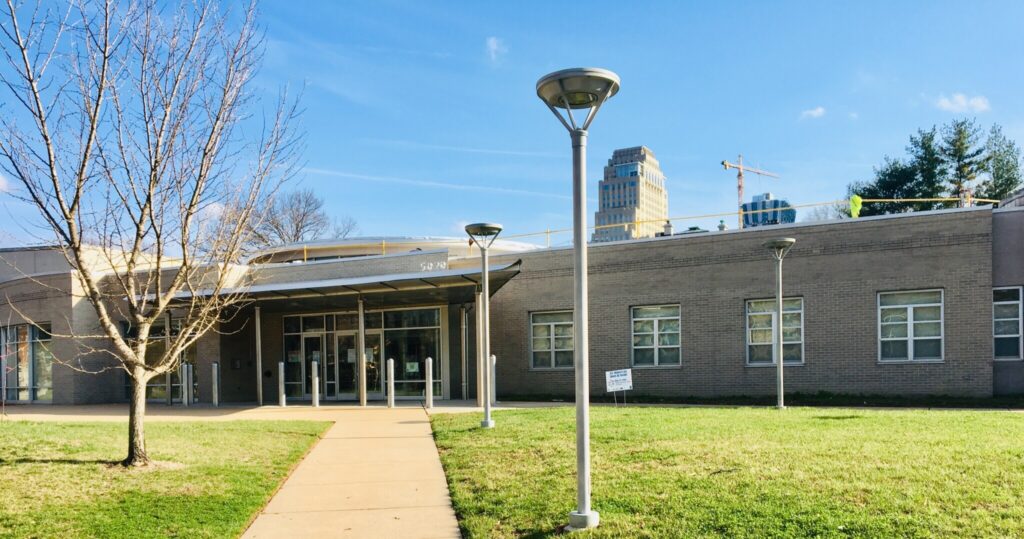 Central Reform Congregation, Kingshighway & Waterman. Here is the calendar of events for the rest of this month showing streaming possibilities.

Hope these listings help. Let’s all pray for the healthcare professionals on the frontlines, many of whom live in the Central West End. We’re sending prayers to all of you.

A lesson from St. Louis’ namesake 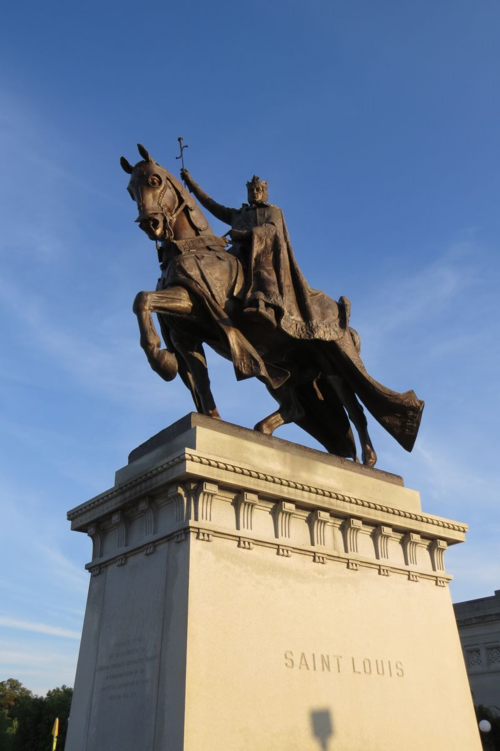 For as many years as I've seen this stunning statue of Saint Louis at the top of Art Hill in Forest Park, I've never focused on the fact that the sword in the hand of the King Louis IX, our city's namesake, is pointed down in a gesture of peace, see above and below.

The statue was a gift from the Louisiana Purchase Company to the City of St. Louis to commemorate the 1904 World's Fair. 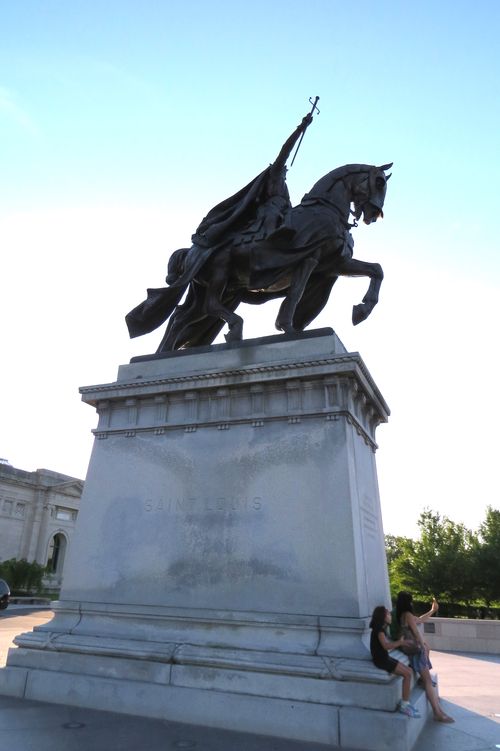 This past Sunday the Catholic Church celebrated Saint Louis' feast day (King Louis IX is the only king who made it to sainthood), and at the Cathedral Basilica, Archbishop Robert Carlson spoke about the current turmoil in our city and his hope that the peaceful gesture by a French king who lived 800 years ago would become a symbol for our city.

(To learn more about why Pierre Chouteau named the settlement he founded on the banks of the Mississippi after a French king, read St. Louis Public Radio reporter Camille Phillips' informative article here.)

In the aftermath of a protest Thursday evening at the corner of Euclid and Maryland Avenues, which began peacefully enough but deteriorated as protestors were leaving the neighborhood, one could not help but notice the greatly increased police presence in the CWE throughout the weekend. As a sign of appreciation for their service, Kingside Diner and Coffee Cartel were among the restaurants (see p.s. below) offering coffee and food to the police who were working 12-hour shifts and giving up vacation time to protect our neighborhood.

With heightened security in the background, there was definitely a palpable energy as visitors and residents alike enjoyed the gorgeous weather and all the CWE has to offer. During the reign of King Louis IX, wars were described as "gentlemen's wars," meaning that disputes between countries were settled by negotiation. Would that we could find a way to put down the guns and settle disputes in a less destructive way 800 years later.

P.S. – The following email was sent by Kopperman's Brian Shearrer:

"Just thought I'd drop a quick line to let you know that Kopperman's always offers first responders in uniform free coffee/tea/soda and 1/2-off food, no civil unrest required."