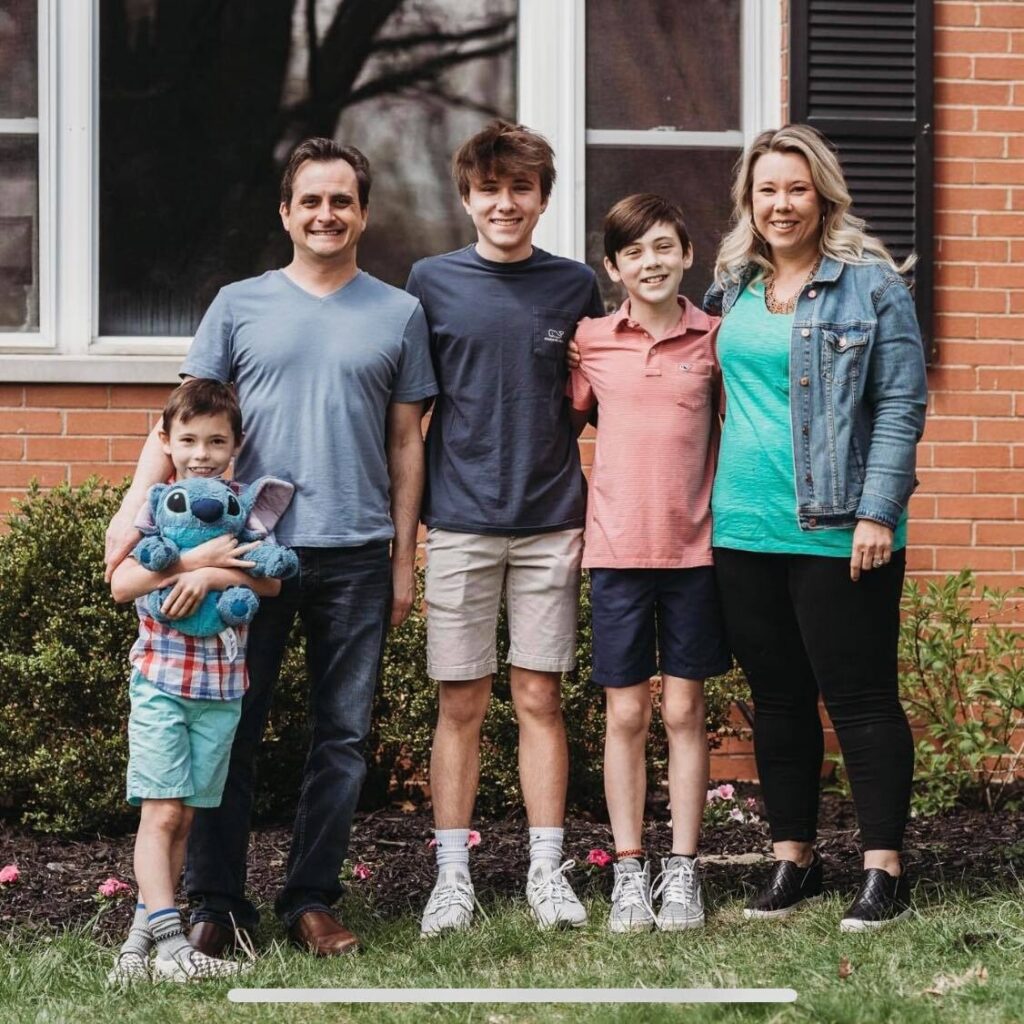 In March and April, when parts of the country were shut down, I was intrigued by an article in the NY Times suggesting that weather forecasting could be impacted because air travel had come to an abrupt halt due to the COVID-19 pandemic. Apparently many airplanes are equipped with sensors that routinely broadcast atmospheric conditions directly to National Weather Service forecasting operations.

Now that air travel has returned—though not quite to the level it was previously, the question of whether weather forecasting has been affected during the pandemic remains. It turns out I knew just the person to ask, meteorologist Brian Bardone, above, who grew up in the Central West End and now lives in Cincinnati with his wife Dawn, and sons Korbin, Kaden, and Koen.

“What you read is true,” Bardone said in response to my questions, “fewer flights were impacting weather models as there were fewer observations that the models needed to run as input. However, how much of an impact reduced flights had is still unknown. Some articles I’ve read say the impact could be low, but again it’s hard to say.” Bardone explained that “satellite observations are the number one input for weather forecasting, air flights are 2nd, and weather balloons are 3rd.”

“There was discussion,” Bardone continued, “about compensating with more balloon observations to measure temperature, dew points, air pressure, etc. but that didn’t happen. What we did observe due to the shutdowns was less air pollution,” he said, “but we have not as yet seen a corresponding decline in CO2 levels in the atmosphere. The theory is that it would take a while for any CO2 reductions to register, as CO2 lingers longer than the pandemic has been around.” 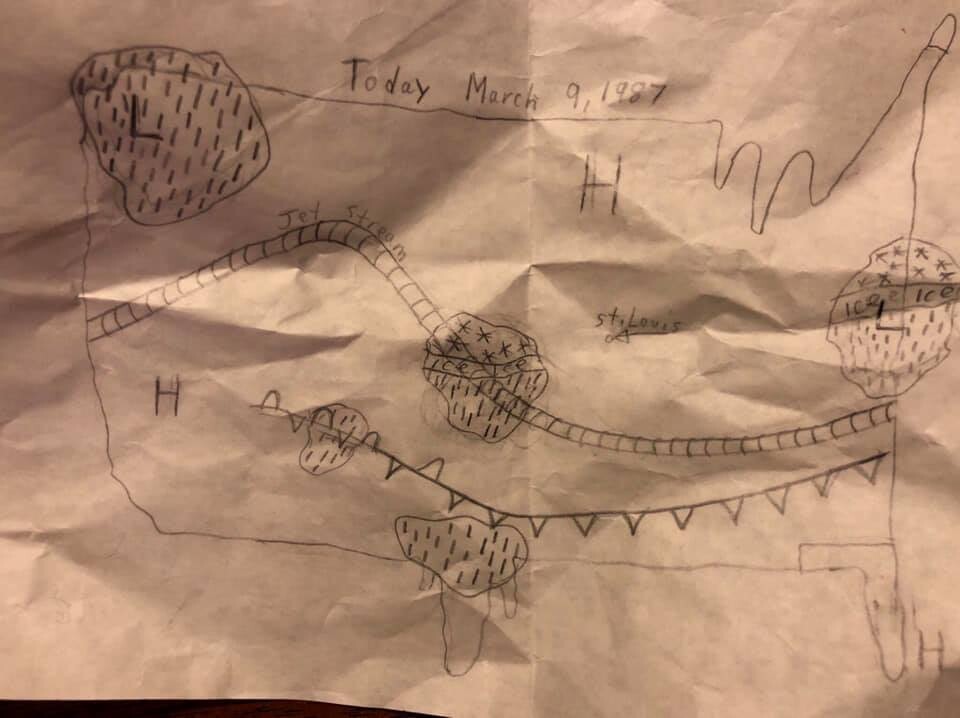 Bardone’s mother, Peggy, recalls that he became interested in the weather in the late 70’s—when he was about 4—during a very cold and snowy winter. From the time Brian was a little boy I would hear stories from our late son Peter about his neighborhood friend’s fascination with the weather.

The weather map above is one Bardone drew when he was around 12. As part of our email exchange he related one of his favorite memories from 8th grade at St. Roch. The principal called one evening as a winter storm approached because she was getting conflicting reports on how much snow and sleet was predicted and she wanted his advice. “I told her it was going to be a good-size storm,” Bardone remembered, “and she cancelled school. It was a good call as we had 8 inches of snow on top of a layer of ice.” 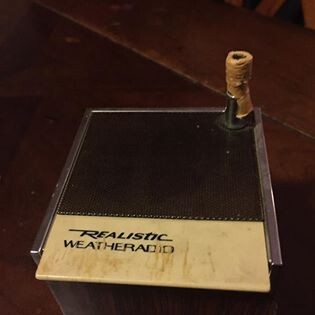 When he was much younger, Bardone would fall asleep listening to his weather radio, above, and dream about working as a meteorologist on tv. His dreams came true for a while while he was earning his bachelor’s degree in Atmospheric Science at Mizzou. He was offered an internship with meteorologist Dave Murray at Fox 2, which was great, but after graduation in 1998 his career path took him in a different direction. He says now it was the best thing that could have happened.

Bardone’s first job out of college was as a meteorologist for Earth Satellite Corporation (Earth Sat) in Maryland. He provided weather forecasts commodity traders and energy companies would use to make decisions on energy prices and demand. Bardone moved back to St. Louis for a brief stint to work for another forecasting company, then moved to Cincinnati where he has been ever since.

A group of meteorologists from Earth Sat started Commodity Weather Group and invited him to join the company.  His job responsibilities include weather forecasting for energy companies around the country, as well as for commodity traders in natural gas. He also provides forecasts for renewables, focusing on how much electricity wind farms will produce at any given hour up to 10 days out. Those forecasts are shared with companies in Canada and in Europe. 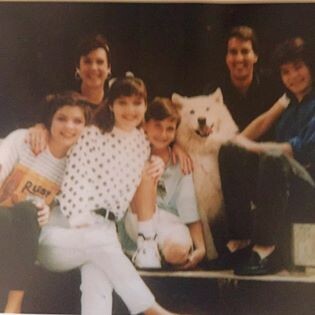 The Bardone family lived at 29 Westmoreland Place from the late ’70’s to early 80’s. The photo shows parents Peggy and and Bob, twins Cadie and Colleen, Brian and older brother Patrick. They kept a horse (Bucky) and pony (Portland) which they would ride in Forest Park, and sometimes bring to the neighborhood’s 4th of July parade when we would gather on Lenox Place. 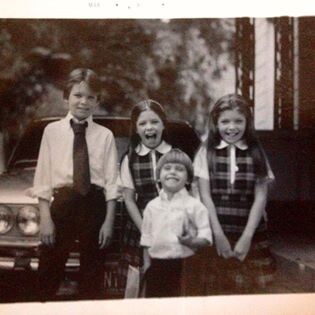 The family also lived in the old Channel 11 building (now the York House) for 7 years, the Tramore Castle, Lindell Terrace, and Park Royal. As was the case with many young adults in the neighborhood, Brian and his brother Patrick worked at Balaban’s during summer vacations and over the holidays.

As we wrapped up our conversation Bardone said that “the CWE was a wonderful place to grow up,” and he still visits whenever he can. “Friends like Peter and Andrew (Dwyer), Vernon Wellington (and others) don’t come around often, and those memories of times together will be forever etched in my memory.”

“Things have changed of course, but it still feels like home. I have fond memories of playing basketball on Lenox Place, ice skating and hockey games at Steinberg Rink in Forest Park, buying baseball cards at The Daily Planet (where BBC Asian Cafe & Bar is now located), my uncle’s place M.P. O’Reillys, (on Maryland Plaza where Bar Louie was located until recently), The Grind and so much more.”

Thanks to Brian Bardone for taking the time to explain a little behind-the-scenes info about weather forecasting, and also sharing what a career as a meteorologist can entail.  His memories of growing up in the neighborhood were fun to hear as well.