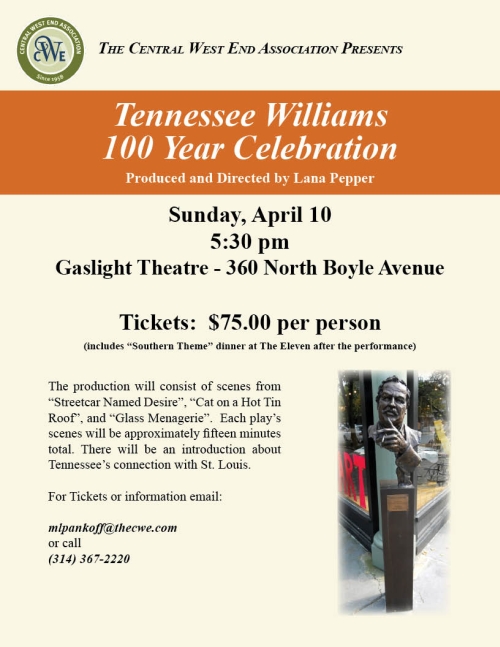 Join friends of the Central West End Association on Sunday, April 10 to celebrate Tennessee Williams' 100th birthday at the Gaslight Theater, home of the wonderful St. Louis Actors Studio. The benefit is the brainchild of CWEnder Lana Pepper who is also Director of the performance.

The Central West End Association is not the only organization on Lana's dance card, however. Friday night's performance is a benefit for the Actors' Studio, and Saturday's for the St. Louis Beacon, both worthwhile organizations to be sure. But Sunday evening belongs to the Central West End Association, so please support it by buying a ticket. It promises to be a very entertaining evening, and with dinner following the performance, how can you miss?

See poster, above, for ticket information. The response to Friday's post, featuring Junko Eccles and her fine-feathered visitor in the wee hours of the morning, has been a heartwarming experience. When Junko saw the post with her picture of the red-tailed hawk she sent it to her friends in Japan hoping it might cheer them up. Over the past couple of days there have been almost 200 hits on my blog from Japan. As anyone who blogs knows, there are days when you wonder why in the world you spend so many hours writing, in my case about life in the CWE? This serendipitous connection with Junko's friends in Japan is one of the best reasons I can think of.

Last Thursday evening Jim and I went over to Forest Park hoping to catch a glimpse of Monica and Dalton (above), the two adorable 6 to 8 week-old owlets recently named by Forest Park Owlman, Mark Glenshaw. They are the offspring of a pair of Great Horned Owls, Charles and Sarah, whom we were introduced to at the beginning of February during an Owl Prowl led by Mark. At the time Sarah was nesting, and while she sat on her eggs Charles hunted for the family. Now the owlets have fledged, meaning they left the nest and have flown haltingly, Mark reports, to a wooded area of the Park not far from their nesting tree. 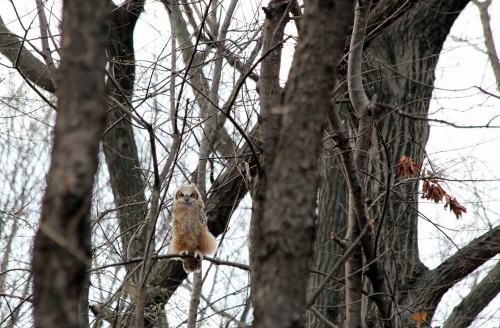 Mark has been following Charles and Sarah for the past five years, naming their various offspring as a way to tell them apart. Monica is named after his Aunty Mon, a doctor who worked in rural Zimbabwe most of her life, and Dalton, after Dalton Brownell, father of a dedicated owl watcher and friend, Barb Brownell.  Monica, who may or may not be female, is the older and  larger of the siblings. (Interestingly, owl eggs are not laid at the same time, and the female of the species is larger.)

On Thursday evening a crow spied the owlets as they perched not far from each other (see first picture). The crow repeatedly dive-bombed them, creating a lot of ruckus, until their mother (see photo below) swooped in and scared him off. Sarah is their fierce protector and full-time huntress, as they cannot yet feed themselves and won't be able to for some time. 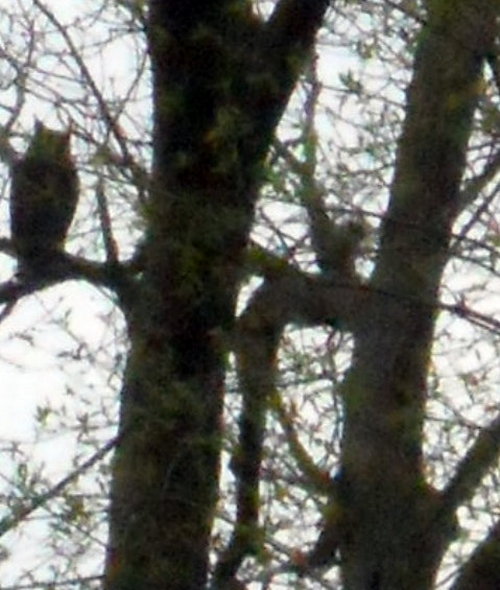 Soon the owlets started making raspy begging noises for dinner. Mark Glenshaw said that when they are a little older they will practice hunting by picking up sticks from the ground, flying back to their perch to shake the sticks up a bit, drop the sticks and start all over again. And they will start catching some juicy bugs on their own soon. 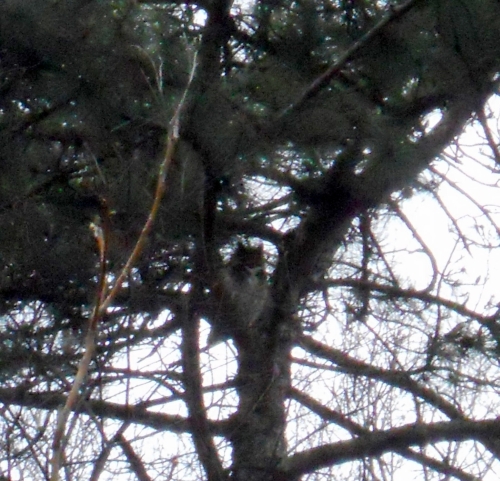 That's the proud papa Charles (above), camouflaged in a fir tree not far from the rest of the family. Charles still hunts for Sarah, bringing her an occasional rabbit, but Sarah hunts for the owlets. Thanks to Mark for sharing his observations with us and for his wonderful pictures, which you can see on his blog.

Mark Glenshaw has graciously agreed to lead two more owl prowls on the next two Saturdays, April 2 and 9 at 6 p.m. He can take ten people at a time. If you are interested, email me through the blog and I'll communicate with The Owlman to let him now how many to expect. You'll get instructions about what to wear and what to bring. As a thank you, Mark asks that the participants send a donation to Forest Park Forever. If you decide to go, you'll be greatly rewarded.

Mark Glenshaw, The Owlman of Forest Park's blog. Owl Prowls, April 2 and April 9 at 6 p.m. Email me at nickisbuzz@gmail.com if you'd like to join either group. 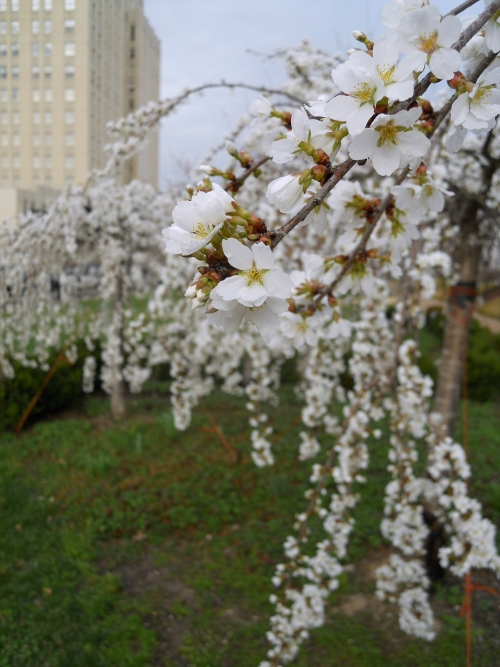 From Tuesday's balmy weather to 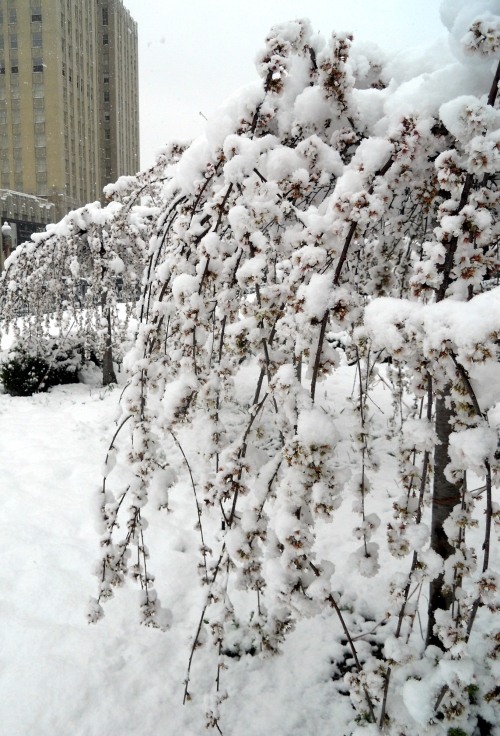 late Saturday afternoon, above and below 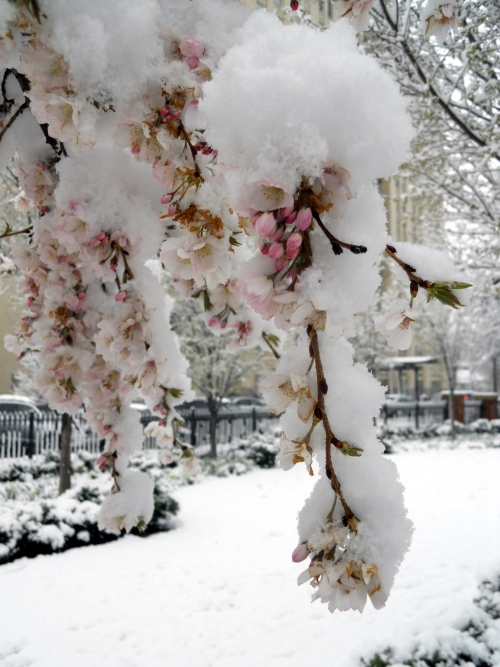 1 Comments
© 2020 • Please do not use my words or images without my permission. Nicki's Central West End Guide - Website Niche and Bespoke