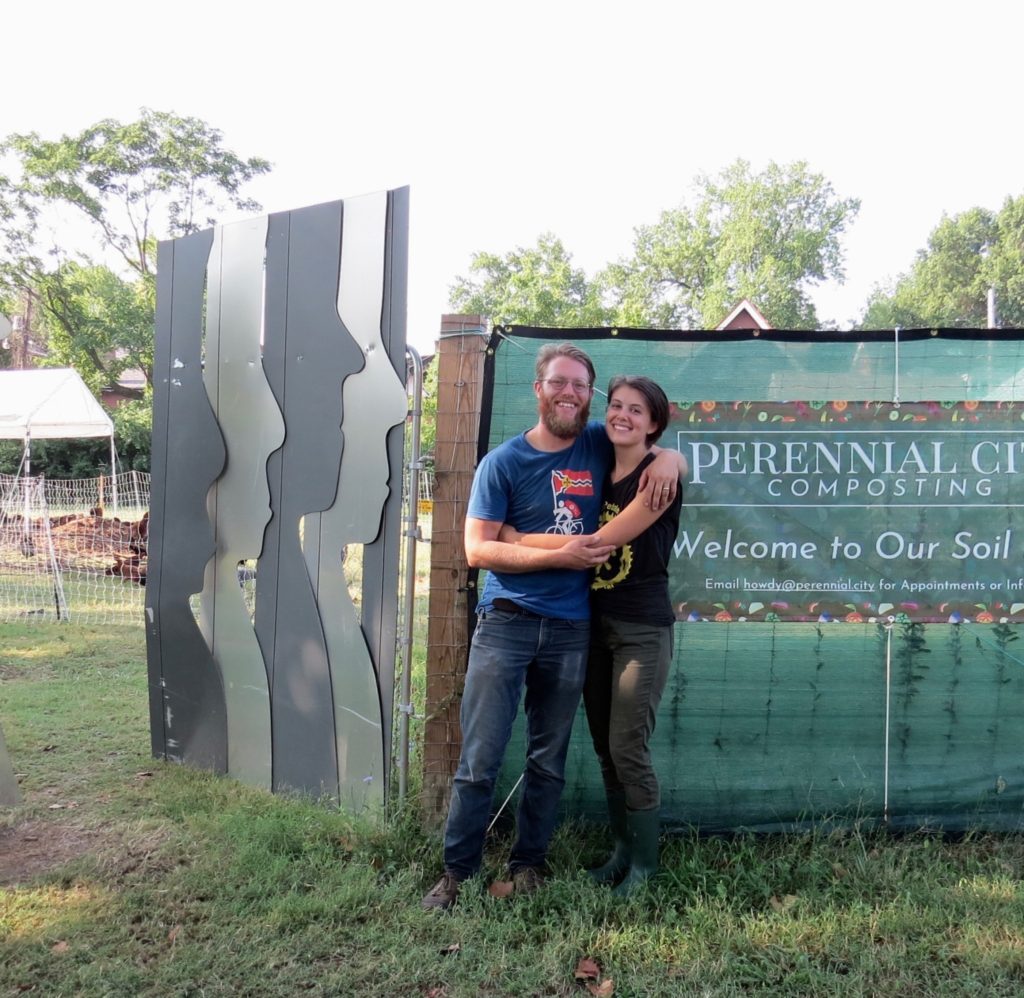 Describing Beth Grollmes-Kiefer and Tim Kiefer as “two peas in a pod” or “two birds of a feather” may seem a bit old-fashioned for the young founders of Perennial City Composting, above, but after visiting with them last summer and seeing their operation in action, the expressions seem to fit “like a glove.”  Their mission, to help save the planet by keeping food waste out of the landfill, has captured the attention of over 200 customers throughout St. Louis City and mid-County, who subscribe to their weekly or bi-weekly pick-up service.

The Kiefers met 5 years ago when Tim, who also founded The Food Pedaler, took a delivery from The Cup to a SLU dorm where Beth, who was earning her Master’s in Nutrition and Dietetics at the time, was manning the reception desk. Not surprisingly, Tim hung around afterwards and remembers that their first conversation was about urban farming, imagine that! (My guess is that after that first meeting Kiefer hoped for many future cupcake deliveries to that particular dorm.)

The last 1 3/4 years have been a whirlwind for the Kiefers. They married on April Fool’s Day 2017, bought a house in the Skinker-DeBaliviere neighborhood, where they started composting in the backyard—and brooding chickens in the basement. In November 2017, the couple purchased 2 acres of land from the LRA (Land Reutilization Authority) in the Visitation Park neighborhood just north of Delmar, where they planned to open a soil farm.

Last January, they built the Perennial City Composting website incorporating Brooklyn-based illustrator Haejin Park’s food-scrap art (yes, there is such a niche) into the design. By April, Tim and his dad had cleared the honeysuckle off the property and the Kiefers moved the composting operation— and a few chickens—from their backyard to Visitation Park, not far from the heart of the CWE.

The Kiefers are photographed above alongside decorative panels they’ve installed at the entry to Perennial City Composting, which were salvaged from their Skinker-DeBalviere neighbor, artist Bill Christman. In a remarkable example of the small world nature of St. Louis, Christman grew up in an apartment building that was located on Perennial City’s property. 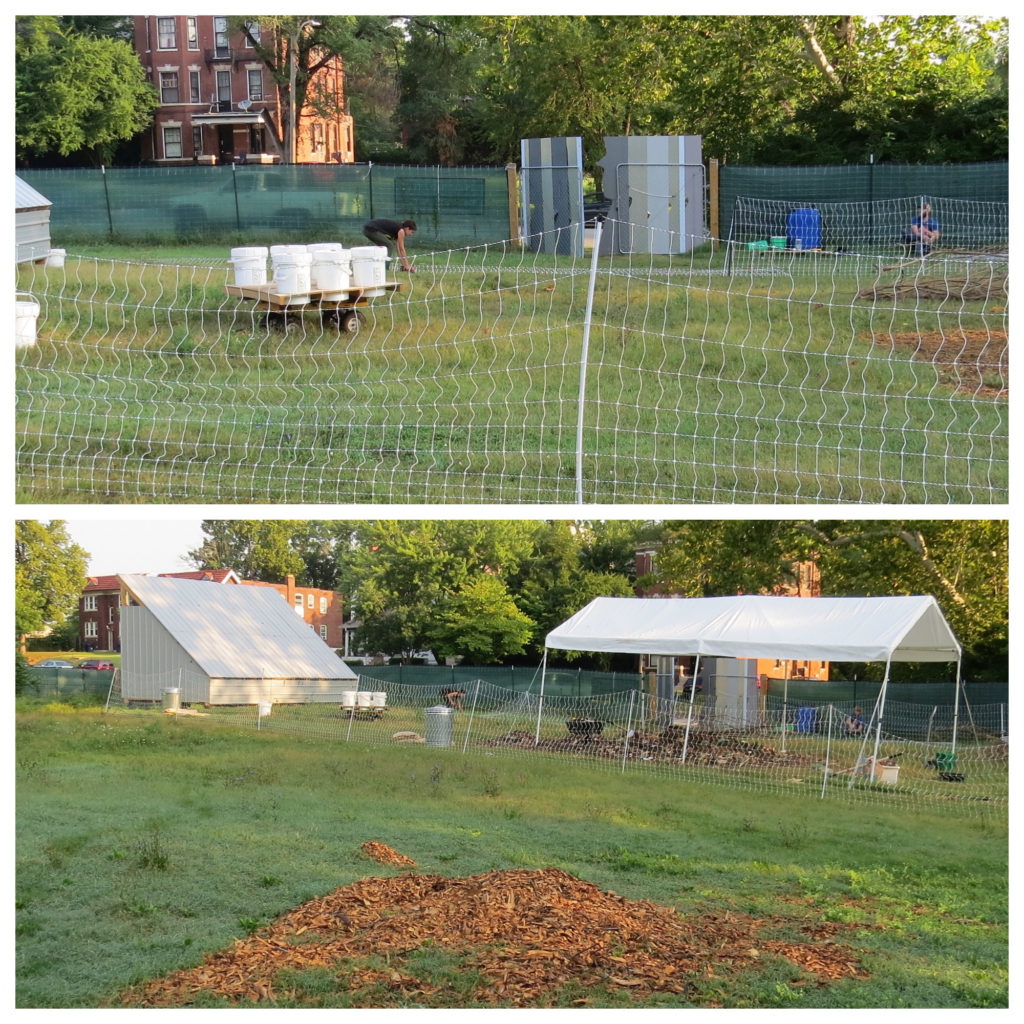 When I visited early one morning, Beth and Tim were hurriedly moving portable fencing to a fresh plot of grass—which they do every 2 weeks so the chickens will have fresh pickings to feed on. The Kiefers, neither of whom has a farming background, incorporated chickens into their compost operation after learning the important role chickens play during their many conversations with the proprietor of The Vermont Compost Company.

Bottom photo: Tim built the pitched-roof chicken coop on wheels so it can easily be moved around the property. 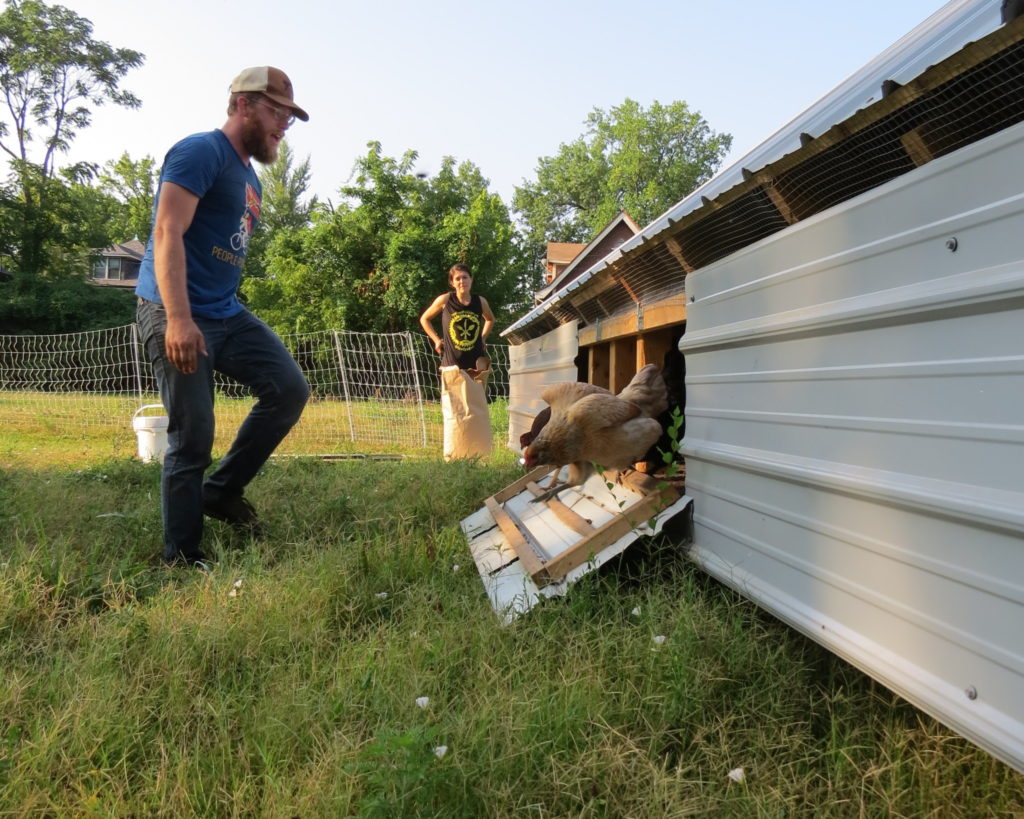 Moving the portable fence took longer than the chickens appreciated that morning, so by the time the door to the coop was opened, there was a mad dash out the door. 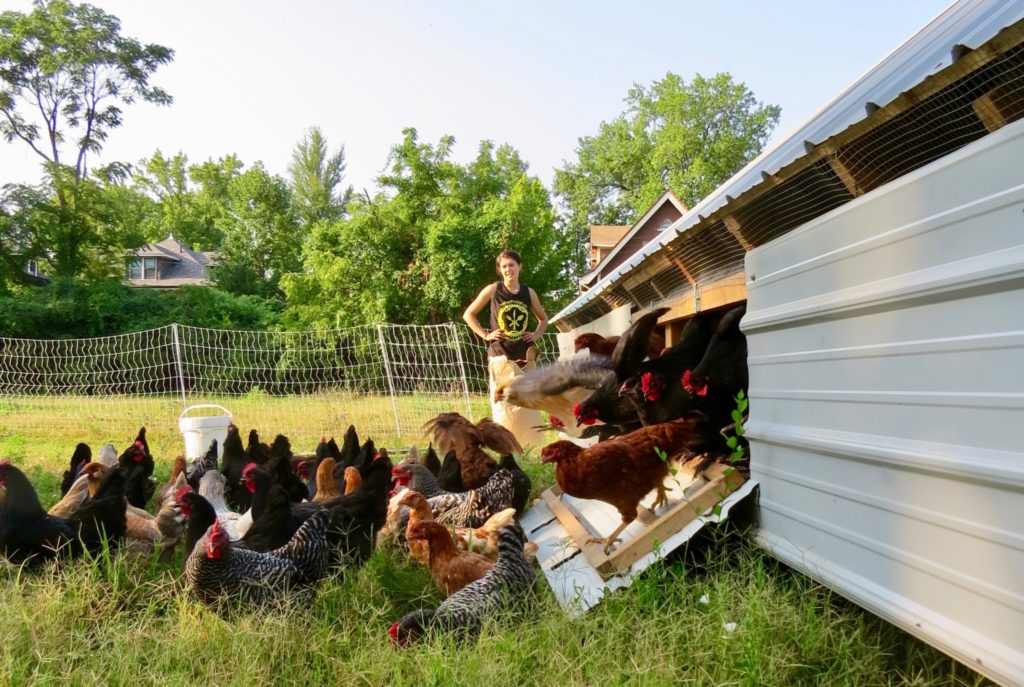 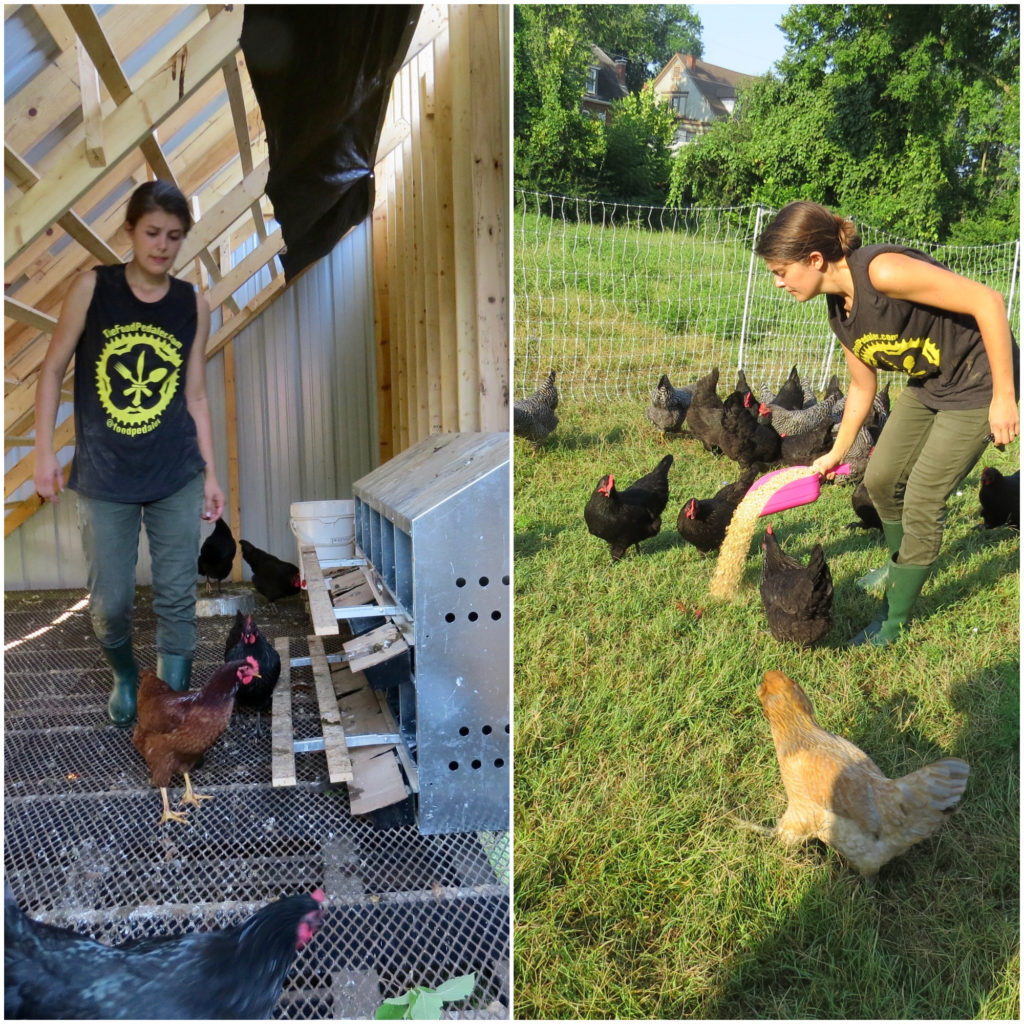 Left: A few stragglers stayed behind while Beth checked for eggs. Right photo: The chickens’ diet is supplemented with a non-gmo Amish grain feed containing oyster shells and kelp for calcium, which is purchased from a Mennonite feed mill in Arthur, IL. 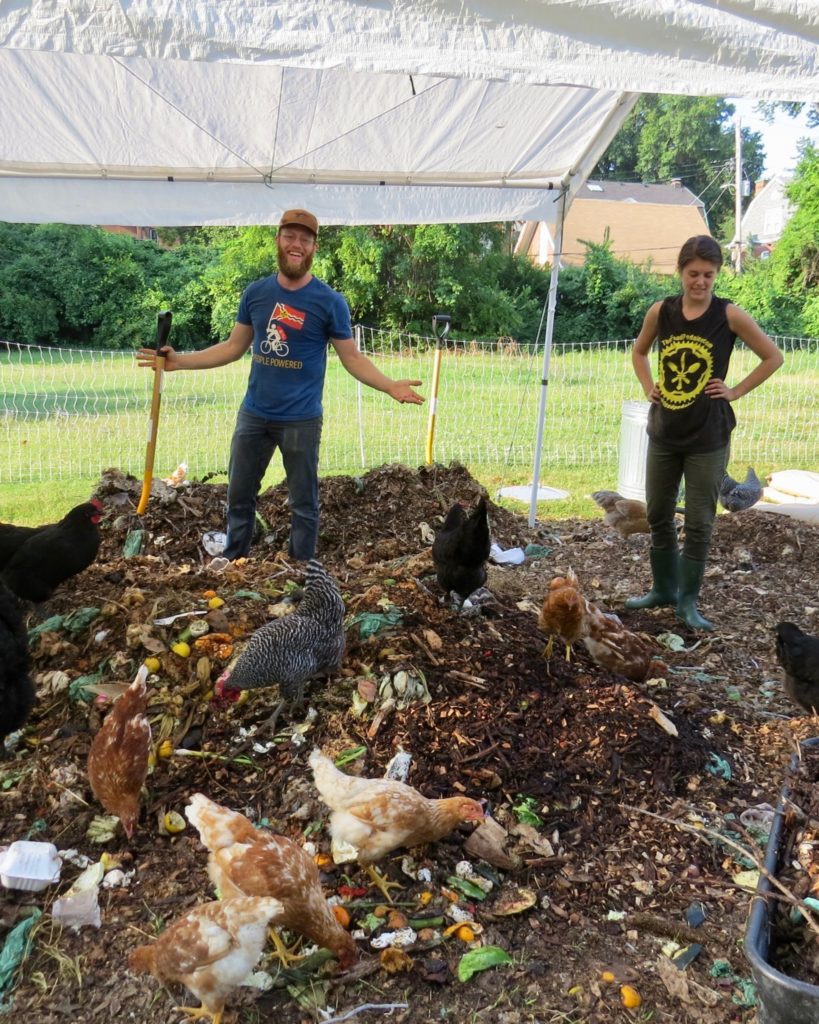 “This is where your compost goes,” Tim said, as he gestured to food scraps gathered from 60 households. The chickens pick through the compost, and fertilize it with their droppings. Grapes and tomatoes are prized finds. Interestingly, meat and fish scraps, which are apparently good for the chickens and for the compost too, are okay to place into the Perennial City Composting bin. 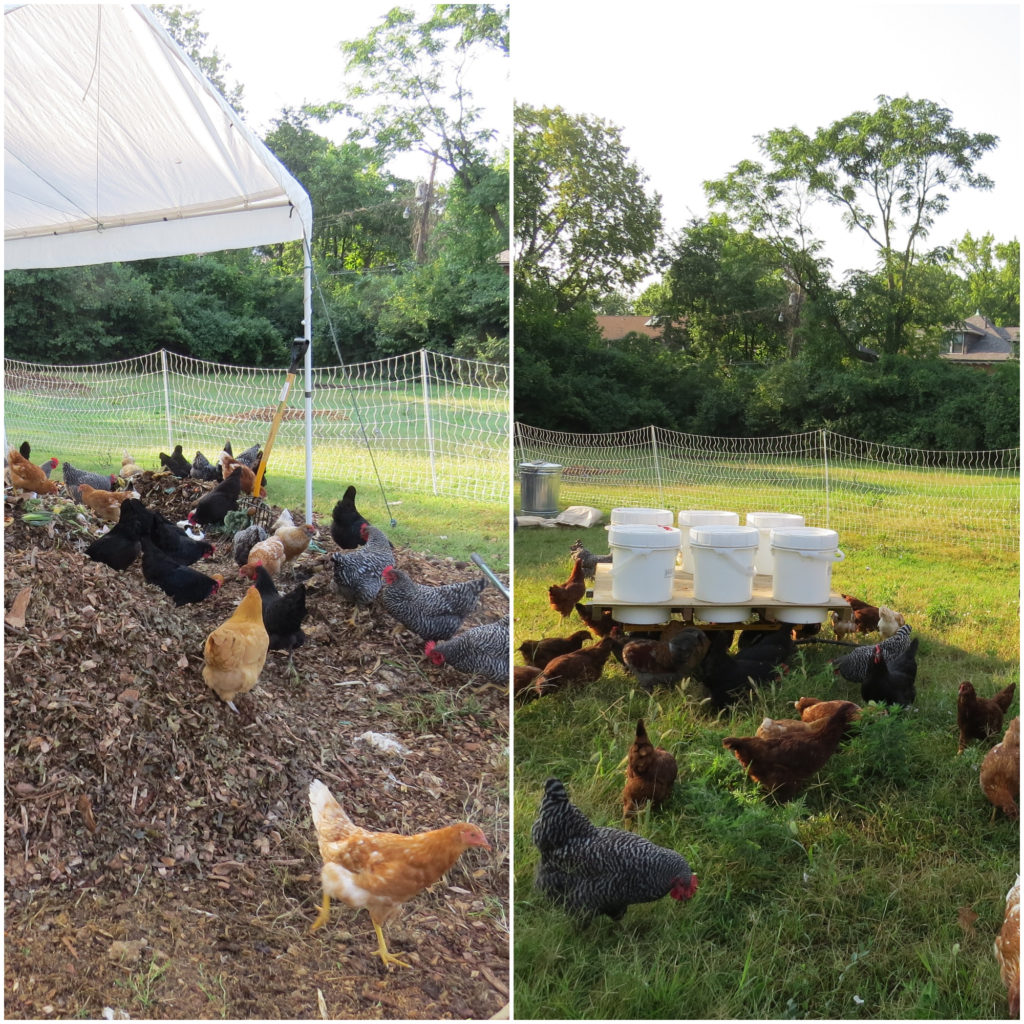 “This is how chickens should be living,” Kiefer said, as I watched the hens pick through the compost or search the grass for bugs. Right: He outfitted the wagon with old composting buckets that are used for drinking water. 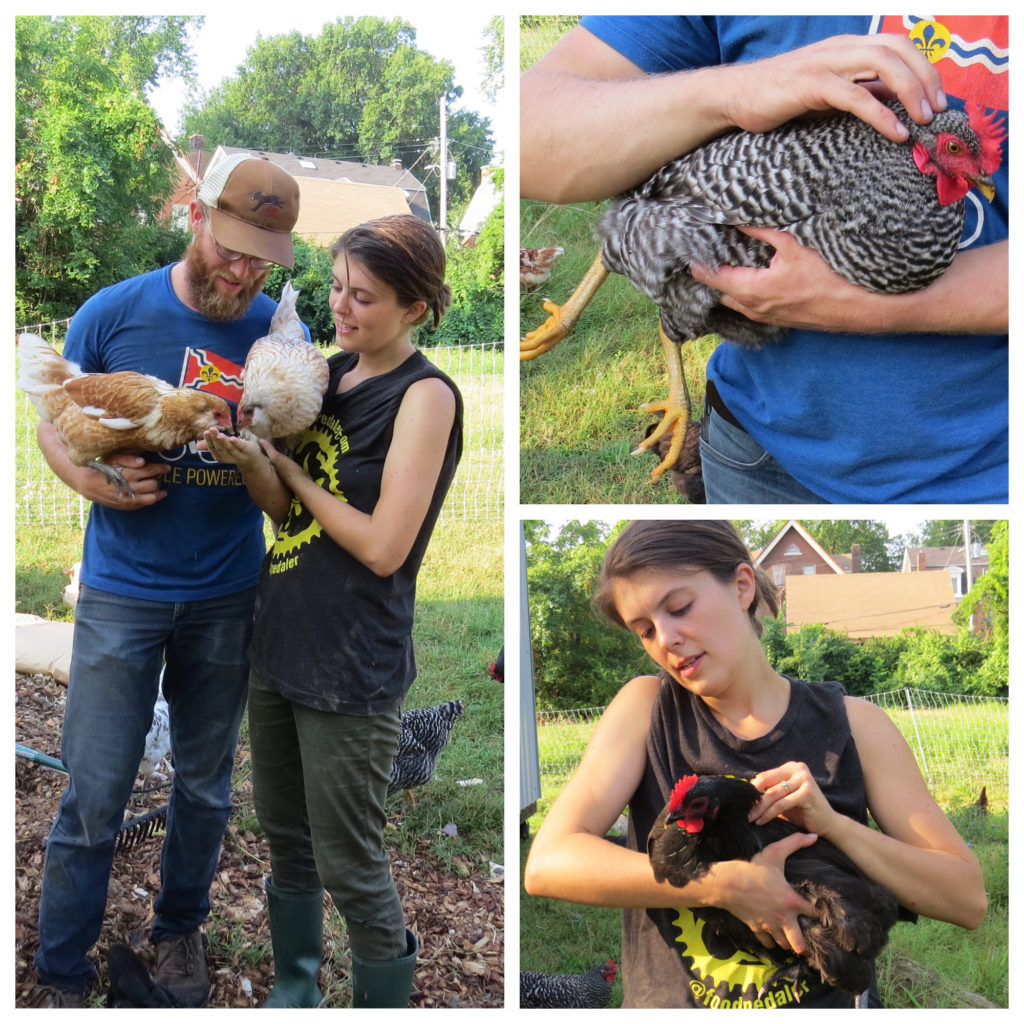 The Kiefers keep multiple varieties of Heritage Breed hens, including Rhode Island Reds, Black Australorp, Barred Plymouth Rocks, as well as Easter Eggers, which are bred for personality and blue eggs. Apparently, chickens are very social and highly intelligent too. Not surprisingly, there is even a hierarchy in chicken world, which is evident when they instinctively return to the pitched-roof coop at dusk. The strongest, most important hens perch at the top. 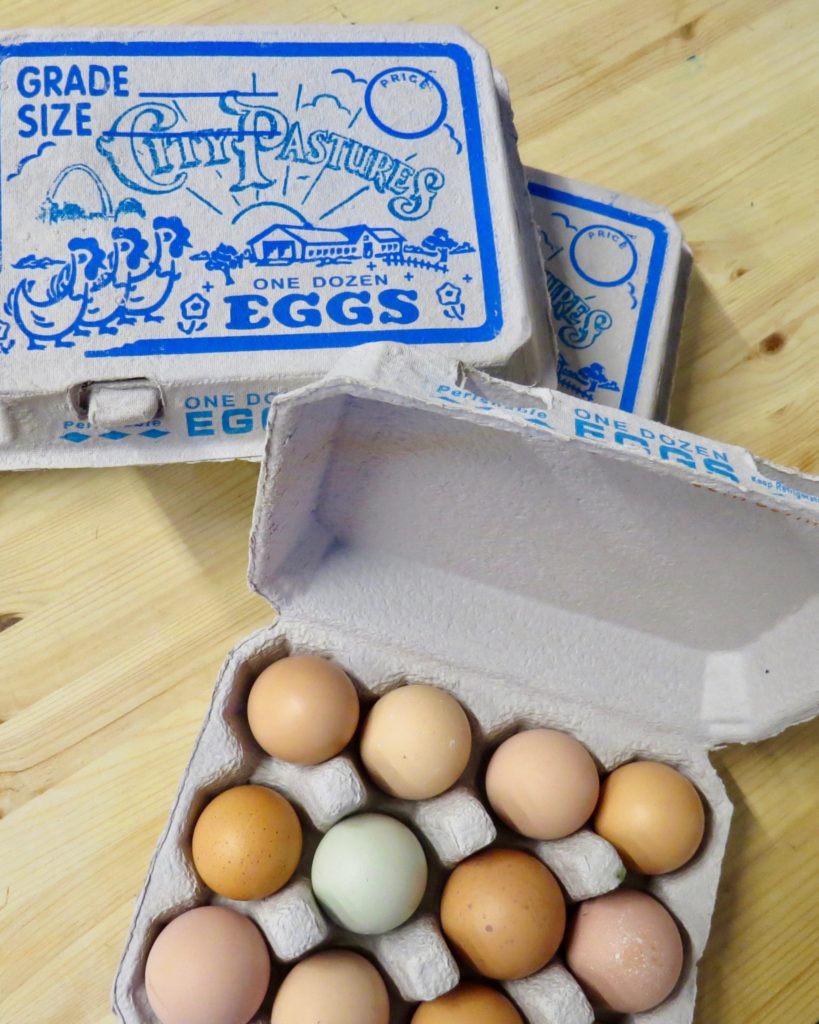 Along with their composting service, the Kiefers have started an innovative Flockshare program as part of their goal to create a closed-loop food system. Subscribers can purchase a hen (don’t worry, they keep it, unless you want it), and for a monthly fee, receive 2 dozen really delicious eggs.

Those who are familiar with Bill Christman’s art will recognize his hand in the old-fashioned design of the egg cartons.

Future plans for the second acre of land the Kiefers purchased (located directly across the street from the composting operation) are still in the works. Currently, the property contains piles of wood chips that are mixed into the compost. The hope is that someday this property will be an urban “eco-Forest Garden,” which would draw people interested in agra-tourism, a hot commodity right now. There are also plans to start a vegetable garden this Spring to put all that good compost to use. 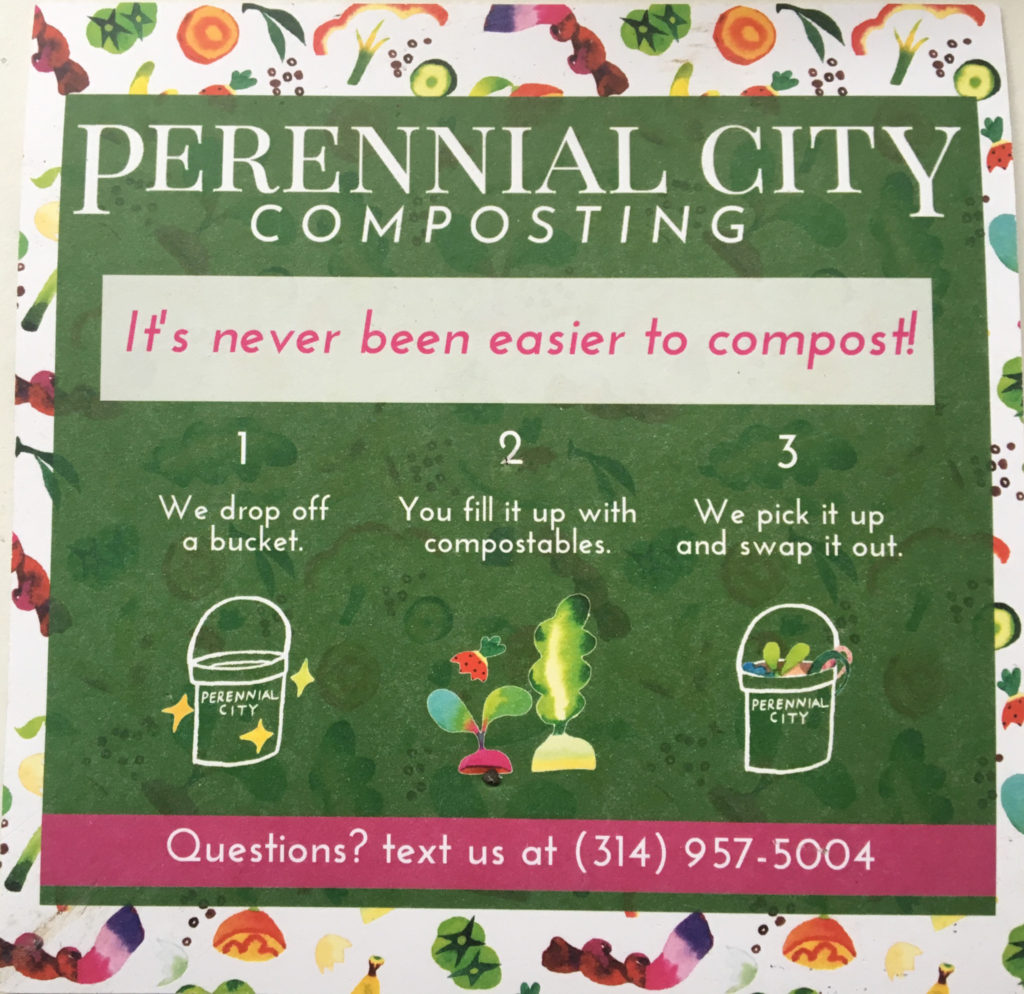 We have been Perennial City subscribers since September and are amazed at how painless it is and, more importantly, how little we throw into the trash. I keep meat and fish scraps in the freezer until our bin is picked up each week, but that is probably not necessary as there is no odor coming from the bin because of the little bag of coffee chaff and compost provided  to sprinkle between layers of food waste. To remind us to leave the bin outside Beth sends a text that reads: “Thanks for keeping the good stuff out of the landfill.”

Thanks to the Kiefers for letting me share their story, and for all they are doing they to help the environment in this little corner of the world. When I apologized to the Kiefers for the length of time it has taken me to complete this post, Tim replied, “That means it will be good, right?” I certainly hope so. 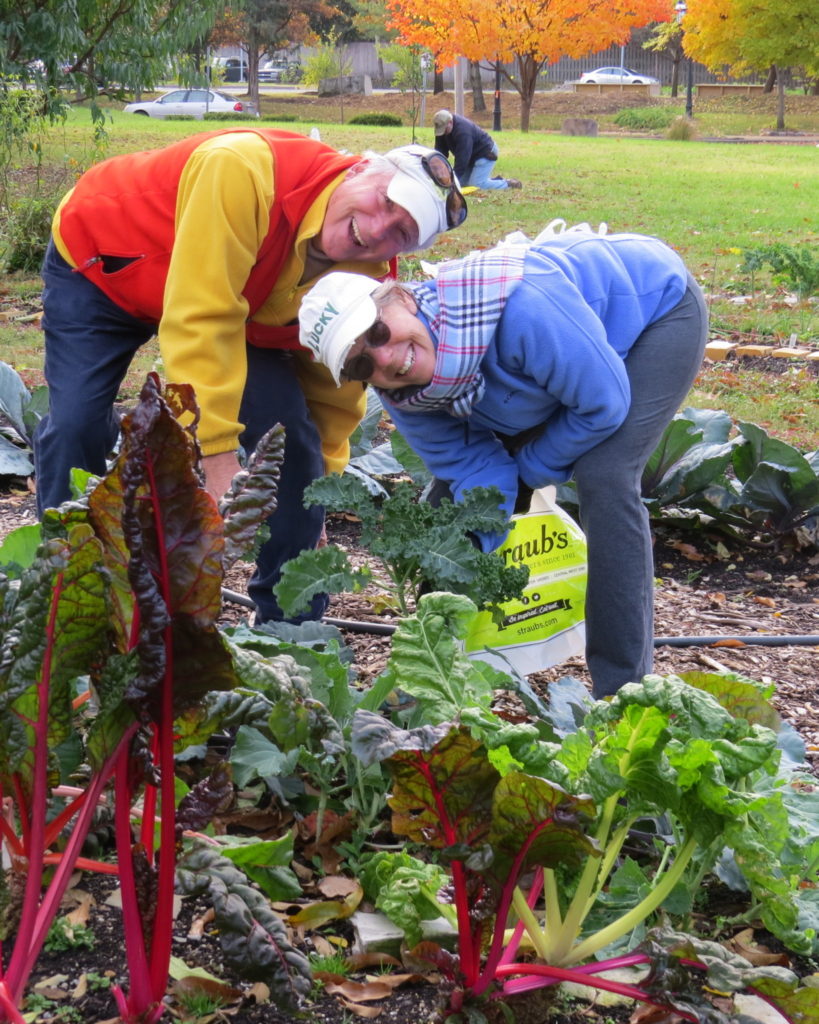 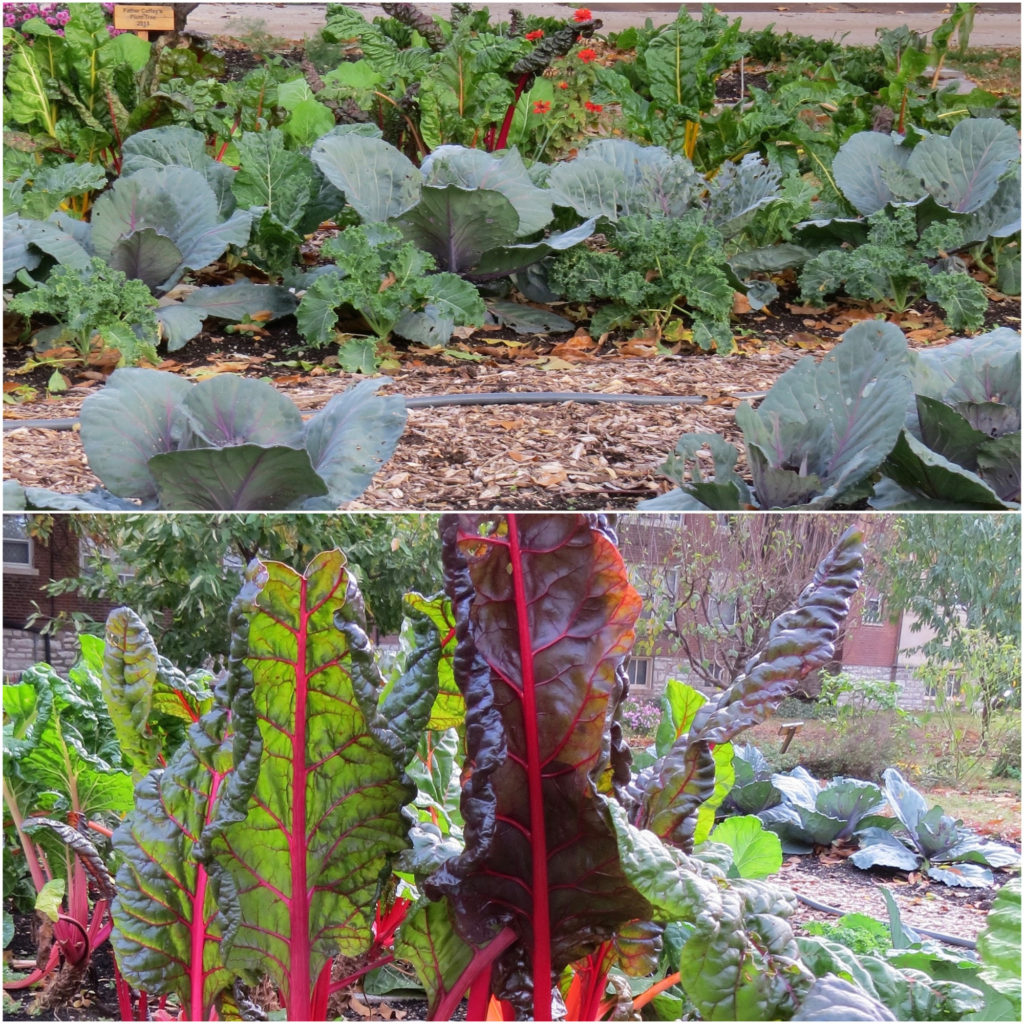 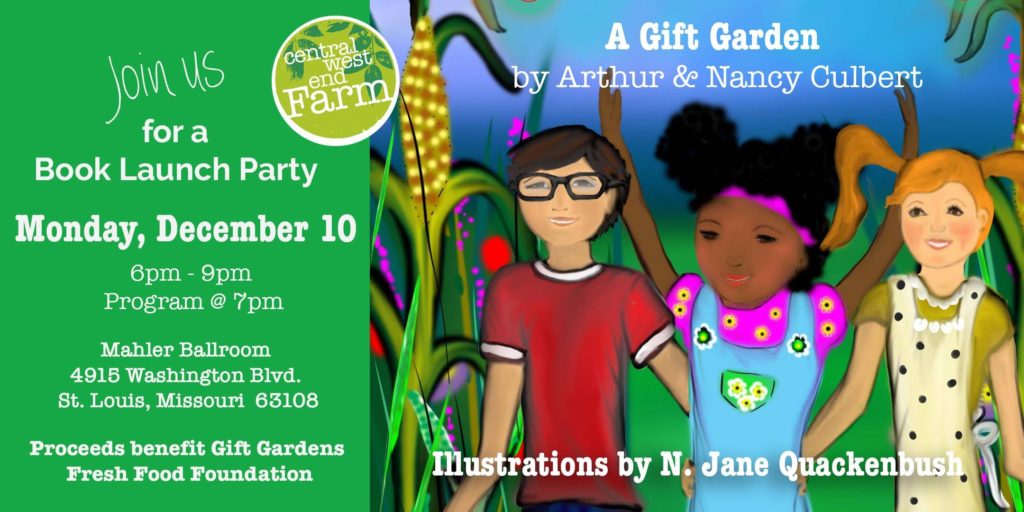 A dear friend shared photos of a surprise visitor she found perched on her “terrasse” at the Executive House last week. It’s been more than a few years since other CWEnders sent photos of hawk sightings (here and here), or since I observed one myself near Euclid and Washington. I was beginning to wonder if these raptors had found better hunting grounds elsewhere. 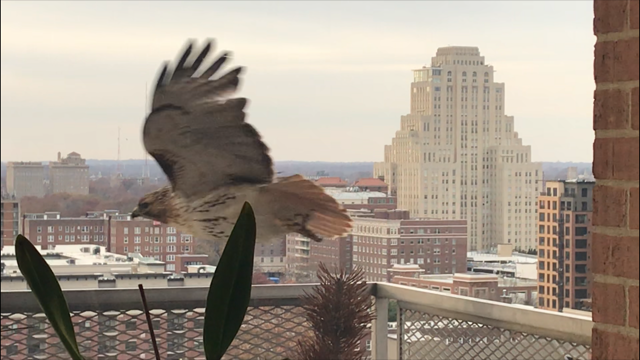 It would appear that what has become the new normal at street level—more activity with the addition of many new residents —has not affected this beautiful Red-tailed Hawk, who seems to be thriving.

Many thanks to my friend for allowing me to share these stunning photographs.