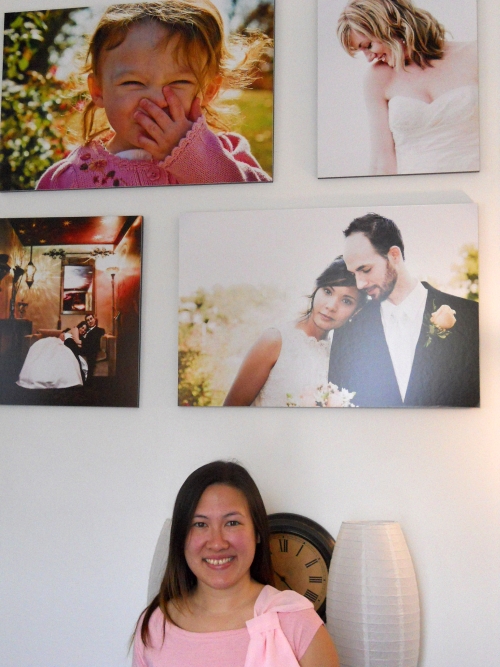 Last fall photographer Gail Fleming leased a small studio at 449 N. Euclid. She photographs her subjects on location, so the tiny space serves as a place to meet with potential clients and display her work. The Consulate Building, at the corner of Euclid and Washington, is populated with small businesses like Gail's, including fashion boutiques Borough Vintage and Calla Lily (for prom & special occasion dresses), Christiane Fine Jewelry, Jennifer Walker Jewelry, The Purple Door Salon, and Lorrice Edwards Design & Interiors.

Gail graduated from Webster University in 1998 with a Fine Arts Degree in Photography. Immediately after graduation, she started her business operating out of her home. Gail leased a space on Brentwood for a while, but when her son entered kindergarten closer to her home in South City's Francis Park Neighborhood, she re-located her business to the CWE, which was where she wanted to be all along. Gail and her husband Robert, who is Art Director of Stealth Creative downtown, met in a martial arts class.

Gail specializes in wedding and children's photography. Her customers find her through word-of-mouth and from websites such as stlouisweddings and stlwed.com. A list of her many photography awards can be found on her website. In the "most unusual wedding" category, she photographed a couple who met at a Star Trek Convention and staged their "Star Trek Wedding" at the St. Louis Science Center. The wedding party dressed in character, and the wedding cake was in the shape of—you guessed it—the Starship Enterprise. 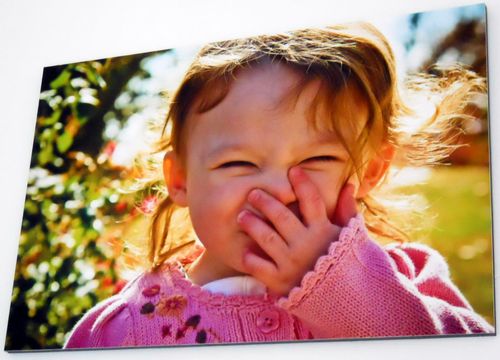 She finds that children photograph more naturally where they are the most comfortable— at a playground, playing in a pile of Autumn leaves, or in their own backyard. To see more of Gail's work, her price list, and calendar of available dates, check out her website here. 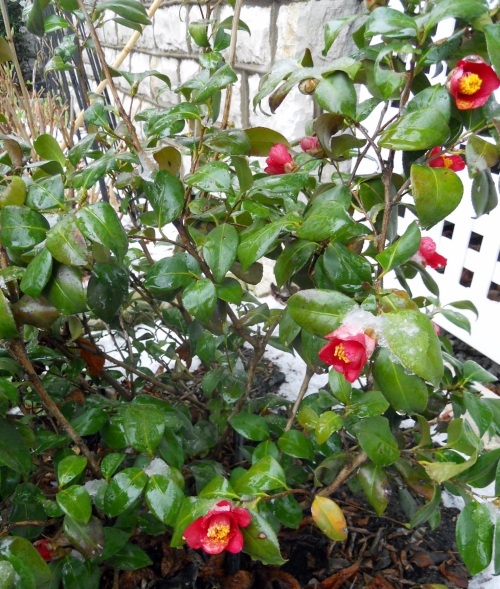 When I planted this camellia in my small city garden almost three years ago, a few skeptics questioned the wisdom of this selection, given our sometimes harsh winters. As I don't coddle the shrub in any way—wrapping it in burlap, for instance—I too wondered if it would bloom again this Spring.

Around the 19th of March I noticed a few of its buds had opened. Just out of curiosity, I checked my archives to see when I posted the first picture of this contented shrub on my blog. To my amazement it was March 17 of last year. It turns out I could simply have copied and pasted the same paragraph I used then…"after the bitterly cold etc. etc. etc." The camellia's time clock has become, in effect, my gardening calendar—"March 17-19: Camellia in Bloom!"

In art class yesterday we were talking about the strange weather and the huge snowflakes that fell early Wednesday morning. One of my drawing friends said that KSDK's Chief Meteorologist Dave Murray forecasts another big snow in April. Another friend, who really knows gardening, added that the Farmers' Almanac says the same thing. And I've heard from other sources that the Almanac has been particularly accurate in its predictions so far this year. At this point, nothing would surprise me. Thankfully, no matter the weather, my camellia seems to be happy where it's planted. 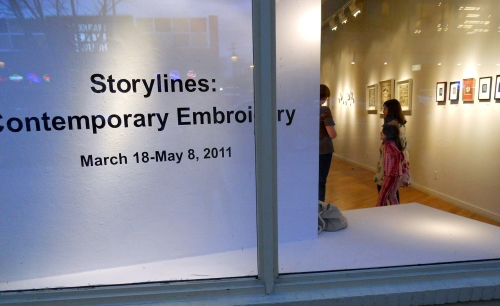 Last Friday evening Craft Alliance opened a new exhibition at its UCity Gallery, "Storylines: Contemporary Embroidery." Five artists were invited to participate in the show, including an old friend, Michael Aaron McAllister, shown below. The other artists are Deborah Slabeck Baker, Diem Chau, Chris Niver, Cayce Zavaglia, and Ray Materson. If you are interested in art and needlework, this is definitely an exhibition to see. 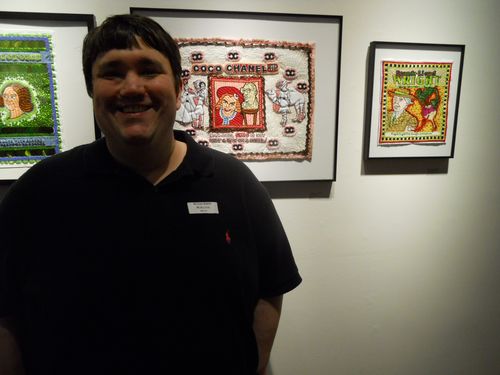 I was first exposed to Aaron's talent with a needle and embroidery thread when we worked for Mary Engelbreit years ago. During the lunch hour, Aaron would work on his fabulous creations; and, on occasion I would receive one of his cherished stitched invitations to his annual Oscar Night party in Soulard. He often includes a line of humor in his pieces, which depict historical and literary figures. When he isn't "hooping" he works as an Assistant Librarian at the Upper School at MICDS…a job he adores.

Aaron told me on Friday that he was quite honored to be included in "Storylines." One of the other artists in the exhibition, Ray Materson, learned to stitch when he was a prison inmate. He would unravel socks and use the thread to create his miniature works, which are collector's items, and measure a mere 2.5 x 3". The feathered stitches in his fascinating pieces are amazingly tiny. 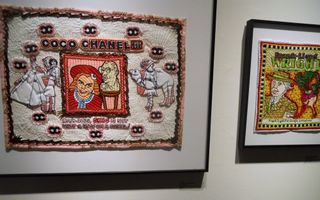 Two of Aaron's pieces exhibited at Craft Alliance are shown here, one of Coco Chanel and a partial shot of an embroidery of Frank Lloyd Wright. The exhibition runs through May 8. 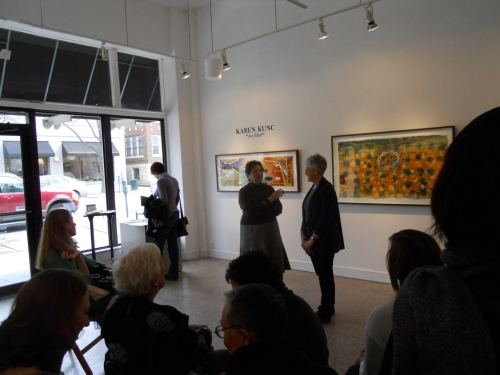 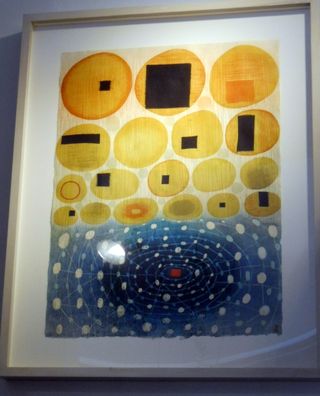 Karen Kunc is a printmaking professor at the University of Nebraska. She explained her printmaking process to an audience that included participants of the Printmaking Conference including a Japanese student from a small college in southern California who fell in love with the CWE. "An Eden" will be on exhibit until May 8. 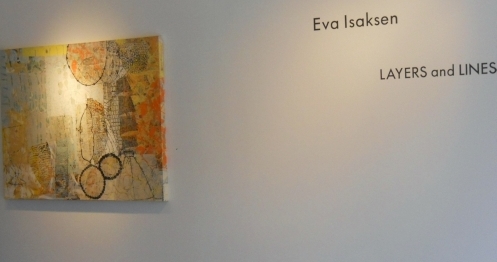 Another CWE gallery participating in the printmaking conference was the Duane Reed Gallery, located across from Atrium Gallery at 4729 McPherson. The work of Eva Isaksen, a Seattle-based artist who was born in Norway, will be on exhibit until April 23. 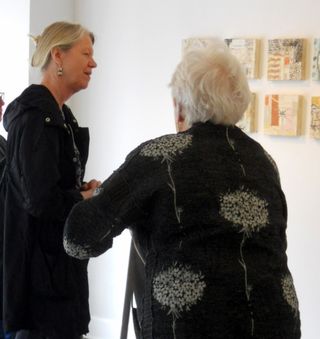 Isaksen(left) prints, draws, and cuts thin papers and then layers them endlessly to create her art, shown above and in the background to the right. (You'll have to stop by Duane Reed to get a better look.) 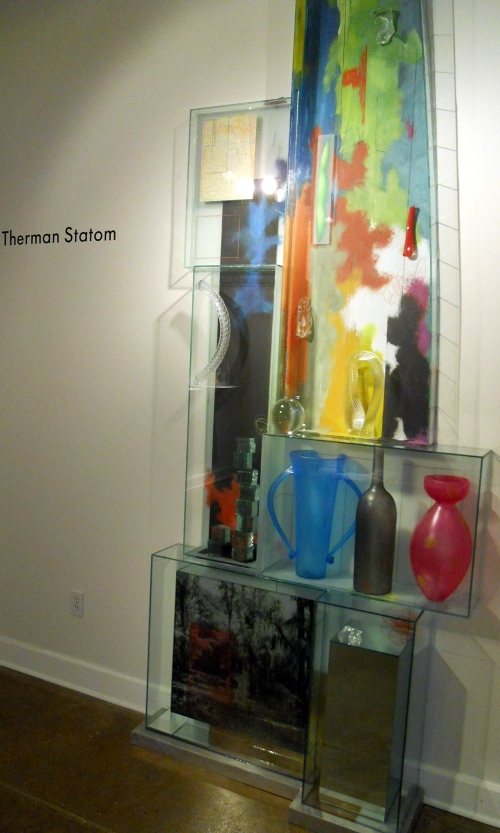 The back room at Duane Reed houses an exhibition of Therman Statom's glass pieces. Statom is an American Studio Glass artist whose primary medium is sheet glass, which he paints and assembles adding found objects, shown above and below, to stunning effect. 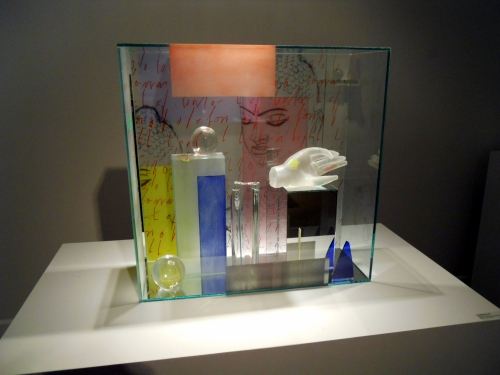 Therman Statom's work will be also be shown at the Duane Reed Gallery until April 23. Finally, the Willam Shearburn Gallery at 4735 McPherson showed an eclectic mix of art including works on paper by Edward Ruscha and Wayne Thiebaud.